A Waseca woman who allegedly stole nearly $2,700 from the Albert Lea Dairy Queen where she worked in June 2017 was charged with a felony Monday in Freeborn County District Court. 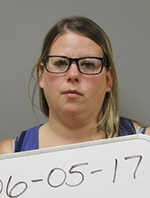 Court documents state Hayes was charged after an Albert Lea officer was dispatched June 5, 2017, to Dairy Queen on a report that Hayes stole $2,681 from the store safe. Video showing the incident was on the store’s security system.

The video allegedly caught Hayes wearing a hoodie and entering the store at 5:44 a.m., disabling the security system. Hayes then went to an office, sat in a chair for about four minutes before opening the safe on the floor. She allegedly reached into the safe, placed two cash bundles on top of the desk before placing the bundles in front hoodie pockets and walked out of the office.

Hayes allegedly did not go to work later that day.

An email from the Dairy Queen security company allegedly showed Hayes’ security code being used at the restaurant at 5:54 a.m.

Hayes was arrested by the Waseca Police Department following the incident.

Court documents state Hayes, who said she was general manager of the restaurant since June 2016, admitted taking approximately $2,600 and said she “debated about taking it and thought it was stupid, but did it anyway.”

Hayes allegedly said she needed to pay her electric bill before it was turned off.

Hayes was released from Freeborn County jail on her own recognizance.

Her first appearance is scheduled for Nov. 1.