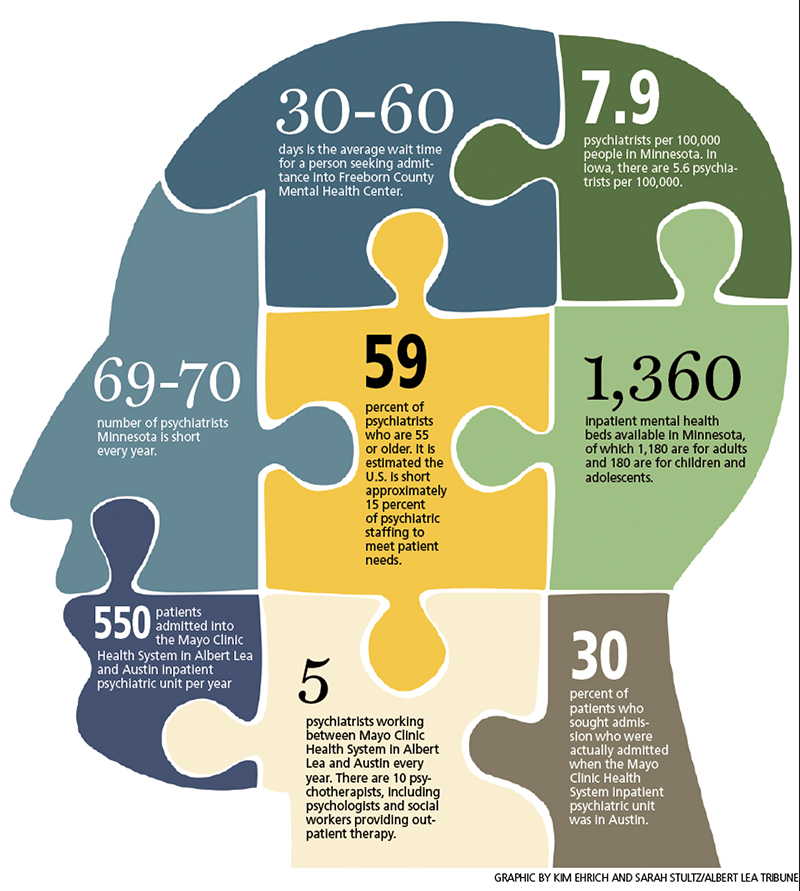 Hospitals in the state of Minnesota have less than 200 inpatient mental health beds for children and adolescents, according to the Minnesota Hospital Association.

That number is part of what mental health care providers and patients said is a shortage that spans beyond the state.

“The mental health shortage is a big problem not only in the community, but actually throughout the country,” said Mayo Clinic Health System in Albert Lea and Austin psychiatrist Ashok Seshadri.

There are an estimated 1,180 inpatient mental health beds for adults, according to the Minnesota Hospital Association, a category in which Minnesota ranks last in the U.S.

“That is a huge problem, because these are the people who are prescribing medications for psychiatric conditions,” Seshadri said.

The hospital system expects the psychiatrist shortage to continue to be an issue in rural settings. Fifty-nine percent of psychiatrists are at least 55 years old, and Mayo expects job numbers to remain stagnant while the number of people needing mental health care increases.

According to Mayo Clinic Health System, there is a 15 percent shortage in psychiatrist staffing across the U.S.

Mayo Clinic Health System hopes to provide integrated mental health services in primary care before they need to be addressed in specialty care.

“We are also trying to innovate how we deliver how we care, so we are constantly attempting to do more with less,” Seshadri said.

“The result is we struggle with throughput,” he said.

Davis said Mayo Clinic Health System in Austin and Albert Lea frequently has patients who are waiting to either be placed in a state facility or outpatient care.

“We end up with a little bit of a backlog that contributes to patients often needing to be in the emergency department longer than necessary,” he said.

Mayo Clinic Health System transitioned its inpatient psychiatric unit late last month from Austin to Albert Lea. The hospital system hopes the move will increase the annual average of 550 patients it has been able to accept into the unit.

When the unit was in Austin, the hospital system only admitted about 30 percent of requested patients.

Davis said when patients seeking admission are not accepted, it sometimes is because of a medical issue or a history of assaultive behavior. The most common reason is because the patient’s condition necessitated an unavailable private room.

Seshadri said the hospital system is also dealing with a shortage of psychologists and social workers.

“We are doing our best to recruit the best people,” he said.

“We struggle in a lot of the changes that we’ve seen happen with some of our substance use programming as related to our shortages in our ability to recruit licensed alcohol drug counselors to work in rural areas,” he said.

“Whenever there is problems with accessing care when you need the care, there is likely to be a problem with the symptoms becoming more severe by the time care is accessed,” he said.

To Seshadri, the shortage increases the chances of potential patients declining to seek needed care.

“It’s not just the shortage,” he said. “It is also going to be a question of providing smart access that we have to be thinking about.”

Seshadri noted the hospital system cannot reserve a bed or hold one for a local patient. If a patient arrives seeking care and the hospital cannot house them, it will try to find the nearest facility with an open bed, even if it is not Mayo-affiliated.

The Minnesota Hospital Association has created a bed tracking system so partner hospitals across the state are aware of where available beds are.

The third time she sought help at the facility, Anderson said she had to wait for 72 hours because the unit was full and there were no inpatient psychiatric units in the region with space.

She ended up being mistakenly taken via ambulance six hours north before she was rerouted to a long-term facility in St. Paul, where she stayed for only one day. She spoke of how overwhelming and at times humiliating the experience was for her and how loud the St. Paul facility was.

Anderson said her experience could have had a stronger effect on someone without as strong of a support system.

She said she reached out to representatives about her experience but did not achieve progress.

To Anderson, dealing with a severe mental health crisis without care is sometimes preferable to being sent far from home to be treated.

“I was at the point where I was afraid to ask for help because the whole system was so stressful,” she said.

Anderson, who moved to Coon Rapids in November 2017, said mental health shortages span across the state.

Anderson said there needs to be an understanding of why so many people have mental health conditions and whether the system is keeping up with demand.

She said patients are at the whim of judicial and hospital systems.

“It’s like playing the lottery,” Anderson said. “You go in waiting, hoping.”

“What we’re seeing is more of a need for community health providers,” he said.

Buhmann said there is a shortage of doctors who will see children, adding mental health conditions have a greater chance of being successfully treated if they are caught earlier in life.

Patients who have been referred from Mayo have told Buhmann they would have had a three- to four-month wait at the hospital system.

“When you’re in a mental health crisis, a three-, four-month wait is years in trying to get the help that that consumer needs,” he said.

Buhmann estimated the average wait time for a new client at the Mental Health Center is 30 to 60 days but can be shorter depending on the severity of the mental health situation.

Freeborn County is part of the South Central Community Behavioral Health Initiative, a 10-county organization in Minnesota. Included in the initiative is the Next Step Clubhouse, which is meant to offer a safe environment that provides companionship, acceptance and support for consumers of mental health services.

“Our ultimate goal is if we can keep our consumers stable, and a lot of the times that’s (management), we’re actually saving the county money from a lot of the hospitalizations that could occur,” Buhmann said.

He said funding increases might not be the solution to addressing the mental health services shortage. Doctors have told Buhmann they want to have other physicians if they are hired.

“It’s actually the resources,” he said. “It’s the personnel, the trained staff to be able to come in and provide those services in a team-type setting.”