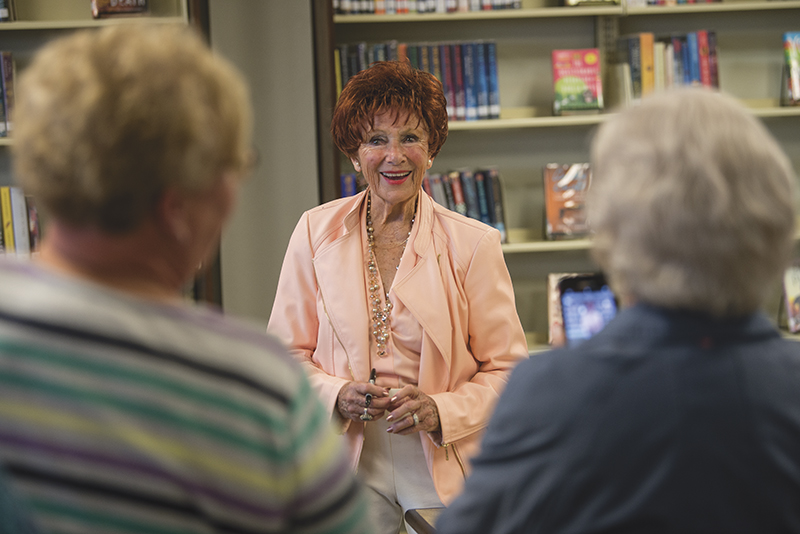 ‘You can be anything,’ actress Marion Ross says

For a few minutes in September, the lobby of the Marion Ross Performing Arts Center was turned into a mirror of sorts.

Facing each other were two Marions: one, bright-eyed in a dark velvet gown and pearls, is the cardboard cutout that lives in the theater lobby. The other, equally bright-eyed in a chartreuse cardigan and smart black kitten heels, took herself in.

“I’m still there,” she said to the room at large.

Marion Ross returned to Albert Lea for a week in September, conversing with residents at St. John’s Lutheran Community on Fountain Lake and signing copies of her memoir, “My Days: Happy and Otherwise,” for over 130 people at the library — and signing bookmarks for those who came after the library sold out of her memoir.

It’s the same town’s library she would go to as a child to read the “Who’s Who” magazine of famous people.

“They were born and then they were famous, and I would think, ‘How do they do that?’” Ross said. 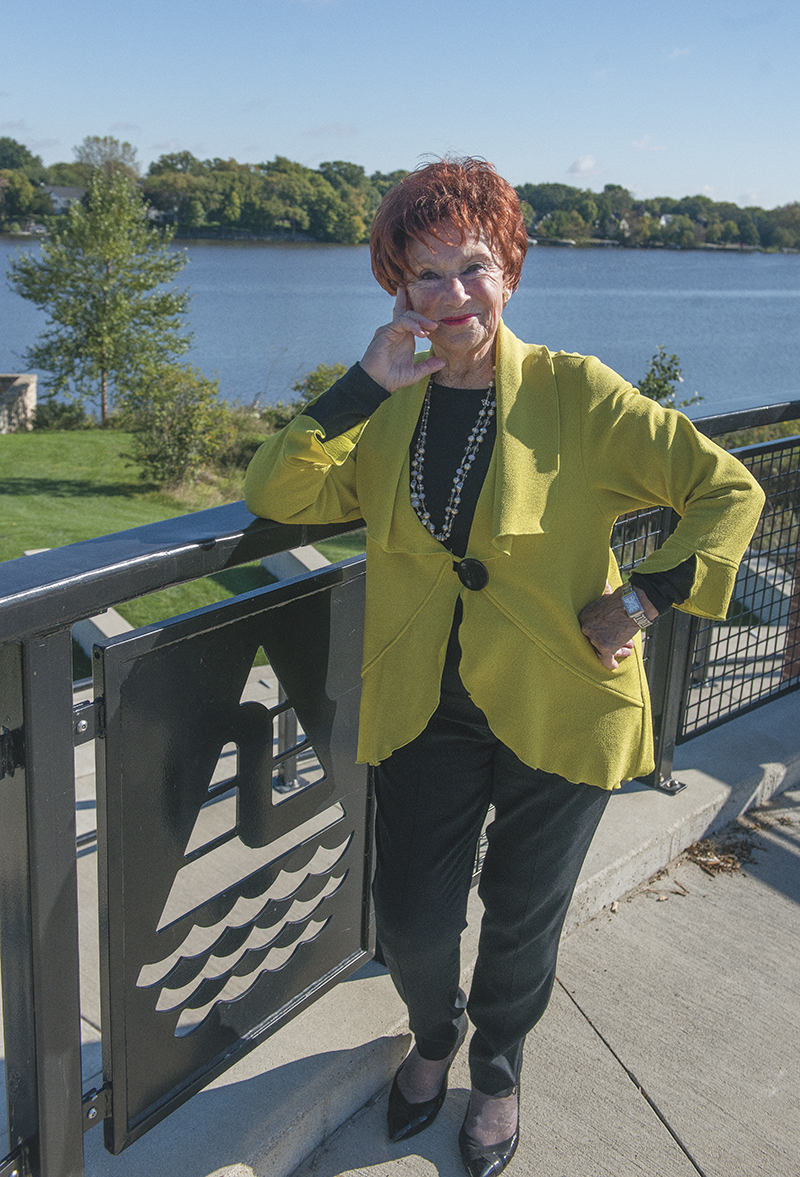 Marion Ross said she has fond memories of walking across frozen Fountain Lake as a girl to go to Broadway Theater in downtown Albert Lea. – Colleen Harrison/Albert Lea Tribune

Returning to the library as one of those “who’s who” figures herself was emotional.

Ross’s memoir was written at the instigation of her son, who brought writer David Laurell to meet her. She didn’t want to write a book, she said.

“They didn’t literally tie me to the chair, but practically,” Ross said.

Laurell recorded her stories, which is what she credits for giving the book her voice. Having someone to tell stories to also meant she wasn’t doing the process alone. She had an audience.

“I would entertain him,” Ross said.

The memoir follows Ross through growing up and her time as a mother, both on television show “Happy Days” and in her life at home. She said the memoir is upbeat.

“Not that I don’t have scandals in my life, and failures, but I didn’t dwell,” Ross said. “That’s really not my story. My story is to think that I could have a dream and follow it.” 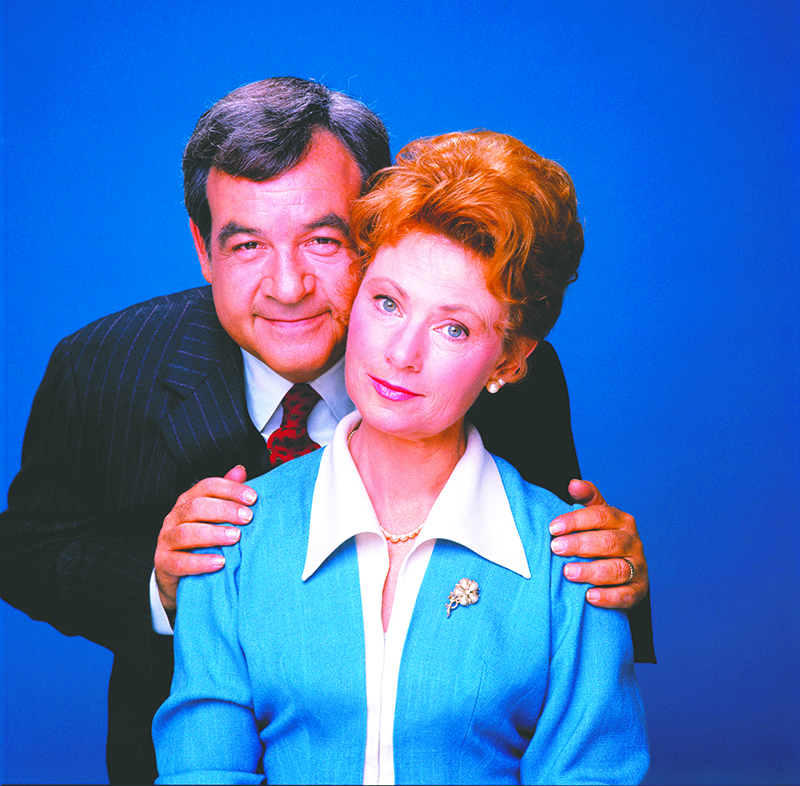 ‘You can be anything’

Ross was born the middle child of a Scotsman from South Dakota and a Canadian immigrant mother, who she said fueled her with a lot of encouragement. She drew on that wellspring of self-belief in moments throughout her career. Several years into acting in Hollywood, when she was 30, Ross had her first child. Right away, she said she had the chance to do a live CBS drama. She said she had a lot of trouble learning her lines. Actress Thelma Ritter reminded her she’d just had a child.

“I always drove myself,” Ross said. “Isn’t that something? … I get that from my Canadian mother, my Irish-Canadian mother. I was always taught that, raised that you can be anything.”

She acknowledged many people aren’t raised in the same way.

“I always had myself under a whip,” Ross said.

Growing up in Albert Lea, Ross lived in a basement bedroom and would walk across the ice on Fountain Lake to go to school, and to double features at Broadway Theater.

“All of it was fueling me to want to become somebody and get the hell out of here, you know?” Ross said. “Become famous.”

Waiting for the second feature, she would relive the first movie scene by scene in her head. Ingrid Bergman was her idol. She was so natural, Ross said. Ross thought she could be like that, too.

“Now, we’ve so humanized our stars,” she said. “These were just idols: absolute fantasy figures.”

Ross moved to Albert Lea in the third grade. She was behind in reading.

“I remember the torture of sitting in a circle of little chairs and you’re reading and ‘you’re next — you are — and you’re closer to me,’” she said. That’s when she experienced stage fright: as the responsibility of reading aloud grew closer.

During elementary school, Ross had a classmate who had a speech impediment. Because she liked the way her classmate talked, Ross mimicked her.

“I’m much more interested in not so much what somebody is saying but how they say it,” she said. “I listen to the rhythm and how they say things, especially if it’s different.”

The pair was sent to remedial speech class.

“I snapped right out of it,” Ross said.

She didn’t snap out of her Minnesota accent until she realized she had one. Ross moved to the Twin Cities after her sophomore year and took drama lessons from a woman who told her she had to learn how to breathe differently — from the diaphragm — and to speak differently. Ross said she has always had a thing for accents. 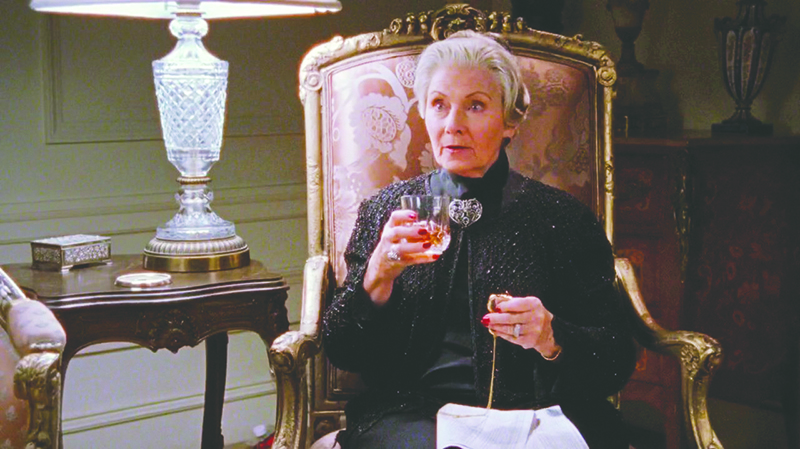 Pictured is Ross in her role as Richard Gilmore’s mother in the TV show “Gilmore Girls.” – Courtesy television still

Over the course of her career, Ross played many people. Thanks to her role as Mrs. Cunningham on “Happy Days,” she also played many games of softball. Ross took up the rover position and would play ball with the media.

“They always thought we were kidding,” Ross said. “No, we were not kidding. We were very serious. In fact, we had to win.”

She remembered being bawled out on the bus ride back when she missed a play, but she could hit, she said.

“I would run with my arms up like this so (the other team) would overthrow first base because they didn’t want to hit that fine old lady,” Ross said. “I was, like, 50 years old playing softball.”

Ross, now 90, said traveling together, eating together and playing ball together kept the cast together as a family. The “Happy Days” team traveled all over the country to play ball.

“It was a great device for meeting the public,” she said.

When a team member got tired, someone else would take over and that team member would go out to meet people.

After the last performance of “Happy Days,” the very next morning the cast-turned-softball team got on the bus at five in the morning. From the bus, they took a plane to Okinawa, Japan, to play at a Marines base.

Whelan was serving in the Marine Corps in Okinawa in November 1983 when he said they were given the day off work to watch a baseball game. Whelan said he got there early enough to get autographs from the “Happy Days” actors as they got off the bus.

“For us it was a thrill, being a big ‘Happy Days’ fan growing up,” Whelan said.

When Ross came to Albert Lea for her book signing in September, he took a picture of Ross and him in Okinawa to the library. It lives in a red-covered scrapbook in between photos of Whelan with other cast members. He is wearing BDUs, while the “Happy Days” crew is dressed in red baseball uniforms. 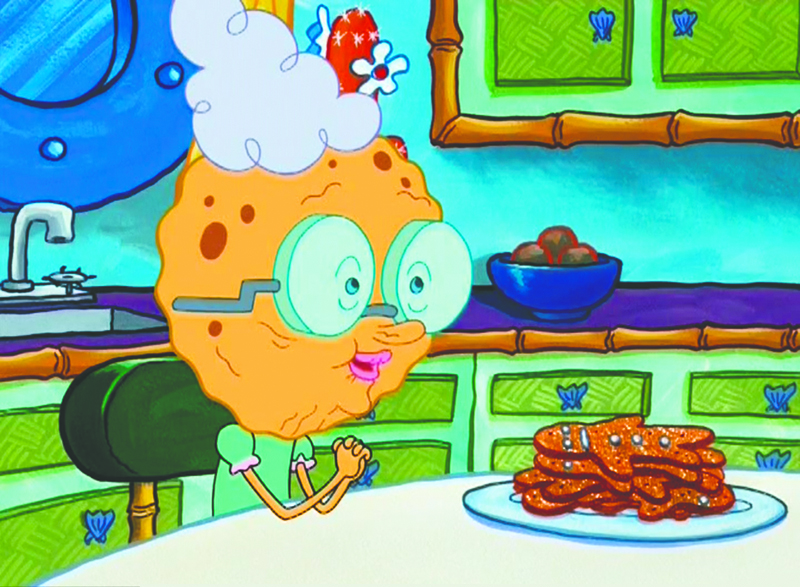 On “Happy Days” itself, Ross said her role started as a quite minimal one because the father was a more dominant character, as was Tom Bosley himself.

“As the years went on, my part got better and better all the time,” she said.

Still, she had a lot of “mother lines.”

“I was very accomodating,” Ross said. “I was not rebellious at all and not assertive. … I’m a perfect product of the ’50s.”

She said it was easy for Bosley to dominate the set and the show.

“You have to learn to be canny, and if you’re Irish to begin with, you learn to be charming and manipulative, dishonest, all those womanly things, and I would make all those things work for me,” Ross said. “Now, there’s a young generation of women who don’t have to do that.”

Ross was under contract with Paramount Studios at age 23, and she said she was warned not to wander around the sound stages alone.

“It’s not safe for you,” people told her.

“One time I’m sitting on the soundstage watching and there were two men near me and a beautiful girl walked by and she said, ‘Oh, hello,’ and one man said to the other one, ‘I know her,” and the other one said, ‘Well, I know her, too.’” she said. “And I thought, ‘Well, no one’s going to say that about me — ‘I know her’ in the Biblical sense, you know. So it was a culture in the ’50s where, well, Marilyn Monroe made use of it. Many actresses made use of that and got ahead that way. I was so well brought up, so I was always cautious and careful with myself and watching.”

When her contract with Paramount wasn’t renewed, she said she was relieved. She spent a lot of time in her younger years thinking she wasn’t quite tough enough.

“I’m feeling stupid about myself,” she said. “I’m thinking, ‘Why don’t you wise up? Why don’t you get a little swifter? Maybe you could get ahead more.’ … I was very concerned about what kind of person I was on the inside.”

As far as who that person is now, Albert Lean Pat Mulso, who met Ross through coordinating work with the Freeborn County Historical Museum, Library and Village, said Ross is a sincere woman who is full of life with a sparkle in her eyes.

“She’s always positive, and she’s a good listener as well as an actress,” Mulso said.

Growing up helped her gradually knock those negative thoughts and feelings out of her head, Ross said. She became a mother, and the culture changed some.

More than 30 years later, Ross is recognized for other roles that kept her career relevant across decades.

“A little, little kid who doesn’t pay any attention to me and then I say to him, ‘You know, I’m SpongeBob Squarepants’ grandma and I gave Patrick the cookies,’” Ross said. She gasps. “Well, (he’s) shaking all over, so pulls down (his waistband), shows me his Spongebob underwear, you know, and I think this is wonderful to cover all these generations.”

But through it all, Ross said she has treasured her Minnesota background.

“Albert Lea means so much to me because I — what I was raised to be here is really what I am,” she said.

And now, she gets to live into that.

“Now that I’m proud of myself and not thinking that I’m, you know, not going to get anywhere, that this is the way to be,” Ross said. “And I see — that’s the wonderful thing about growing up is you look at what you left behind and say, ‘I am that, and I want to be that, and I don’t want to be somebody else anymore.’” 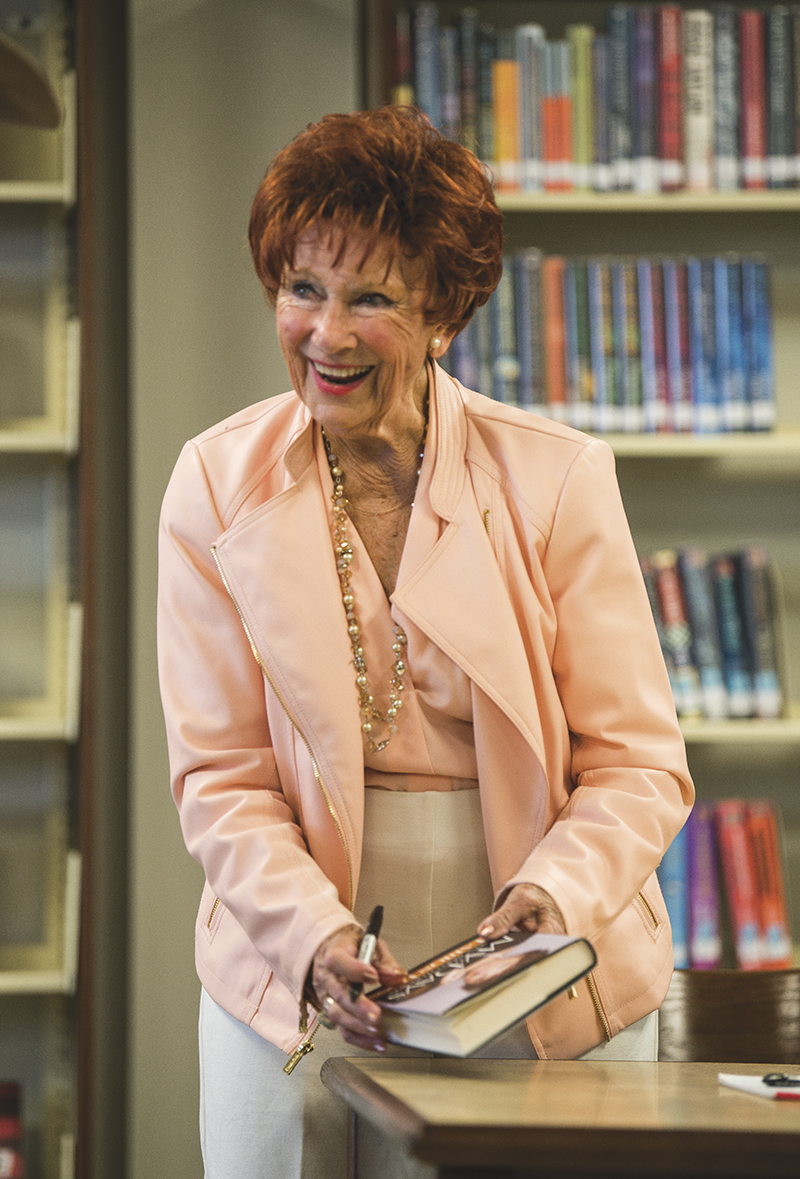 Ross signed copies of her memoir “My Days: Happy and Otherwise” during her visit to Albert Lea in September. – Colleen Harrison/Albert Lea Tribune