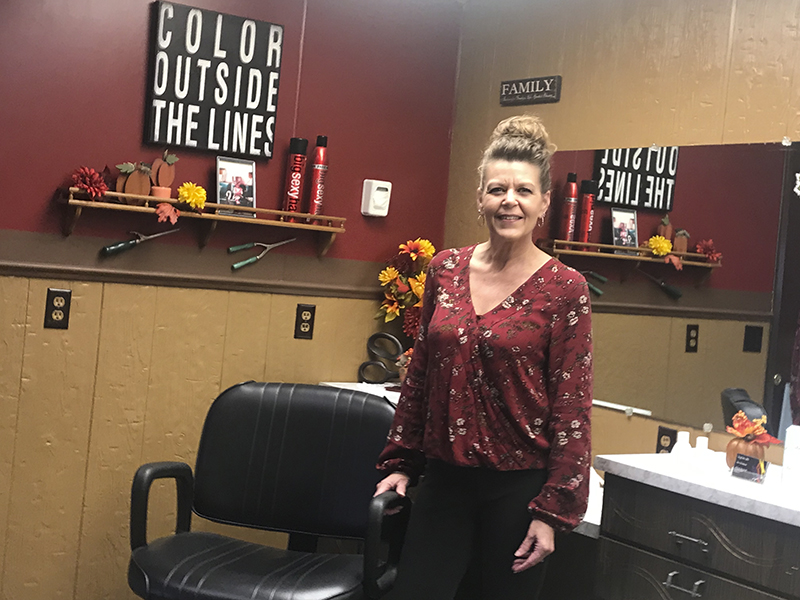 Karri Christenson of Albert Lea is building a home in Hollandale so she can be closer to her business, The Family Hair Salon. - Kelly Wassenberg/Albert Lea Tribune

HOLLANDALE — When one door closes, another one opens.

Karri Christenson, 55, of Albert Lea seems to have been destined to be a beautician. She started cutting her friends’ hair in sixth grade and now owns her own salon, but her journey was no straight line.

Christenson’s childhood clientele grew as she got older — expanding from friends to boyfriends and friends of boyfriends. She even started cosmetology school, but was compelled to quit when she was only a few months shy of graduating. The chemicals from some of the hair treatments, such as perms and coloring treatments, didn’t sit well with her pregnancy.

That door closed, but only temporarily.

Life moved on. Christenson gave birth to a son and started a job with Fleetguard in Lake Mills. She liked her job. It paid well and she had good benefits, so she stayed — until the business closed its doors 20 years later.

By that time, Christenson was 47. Her son had grown up and moved on to college, and she was left wondering what was next. The answer: for her to go back to school. While Christenson had credits at Riverland Community College, she had to complete the entire cosmetology program over again since so much had changed in the beauty industry.

In the seven years since graduation, Christenson worked at Fantastic Sams, Great Clips and Mona’s Style before she was recruited by The Family Hair Salon’s former owner, Bev Newgard.

“She had contacted me and asked me if I’d be interested in coming to check out the place,” Christenson said.

According to Christenson, Newgard was up front about her intentions to retire and wanted someone to transition into the position of owner as she transitioned out.

Christenson agreed to the proposition, realizing that not only would she have Newgard’s established clientele, but some of her own clients would move with her to the new location.

Christenson said she has clients who come from Northwood, Emmons, Geneva, Owatonna and Albert Lea who seem to have followed her from one establishment to the next.

“I truly love being in the business and this town actually needed a salon,” she said of the decision to broaden her horizons from beautician to business owner.

She now sees clients from 2 years of age to 101 providing services, including haircuts, coloring, perms and hairstyles from roller sets to braided updos. Her salon, which is at 201 Park Ave. W. in Hollandale, is open from 9 a.m. to 5 p.m. Tuesday through Friday. Appointments are recommended, but if someone needs to get in for a last minute service, she obliges them whenever she can.