An end to the season for the Panthers 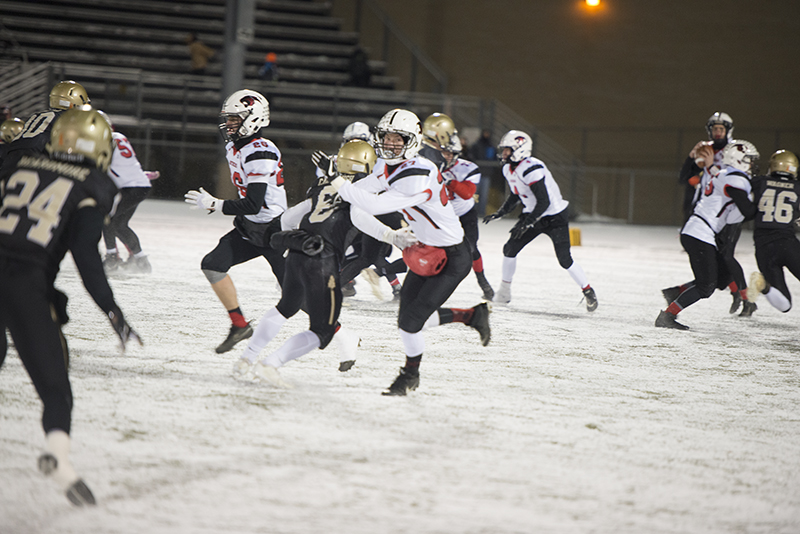 NRHEG senior Brady Agrimson breaks in his route during the second quarter of Friday night’s loss to Caledonia. The Panthers end their season with a record of 9-2 and their first trip to the state playoffs. - Tyler Julson/Albert Lea Tribune

NRHEG shut out by Caledonia in state quarterfinals

BURNSVILLE — The NRHEG football team traveled to Burnsville to take on Caledonia in the quarterfinal round of the Class AA state tournament on a blustery Friday night.

The Panthers weren’t able to keep up with the Warriors offense and couldn’t find any offensive momentum themselves, losing the game 41-0 and ending their season.

The Panthers started the game with the ball and, after a short completion to senior Brady Agrimson, were forced to punt. The Warriors also punted on their first offensive drive of the game, but unfortunately for the Panthers, it was their only punt of the half.

An interception thrown by the Panthers on a crossing route ended the drive and gave the Warriors the ball in favorable field position. The Warriors capitalized by throwing a 35-yard touchdown pass to take a 7-0 lead halfway through the first quarter.

NRHEG would commit another turnover on its next drive, this time Caledonia returned the loose ball all the way to the endzone for a score to go up 14-0. 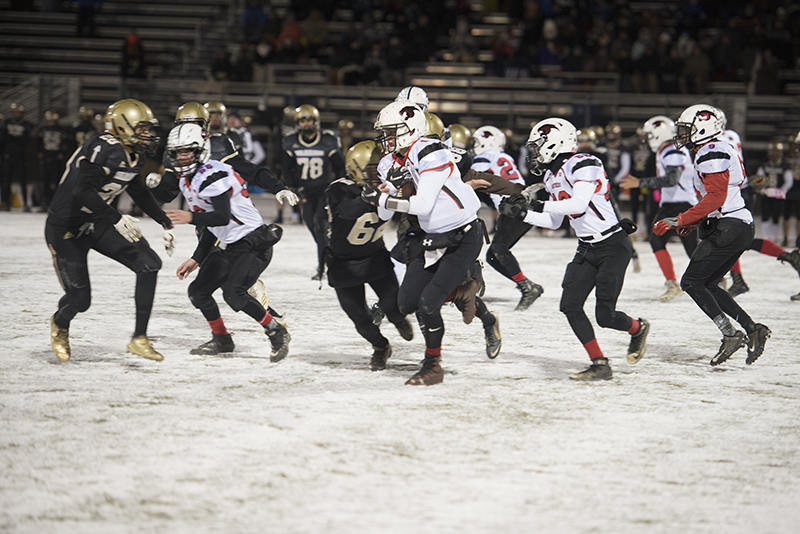 The Panthers were forced to punt after another three-and-out drive to end the first quarter. The Warriors took a gamble on their ensuing drive by going for it on fourth and short. The risk paid off with a quarterback to the keeper into the endzone and took a commanding 20-0 lead after an unsuccessful PAT.

NRHEG’s offense again stalled out and punted away for the third time in the half. Caledonia took a lot of time off the clock on its next drive, but it ended the same way as the previous three when it powered into the endzone on a one-yard rush.

Panthers returner Lonnie Wilson brought the next kickoff all the way up to the Panthers 44-yard line and marched it down the field. However, a second interception ended the drive before the Panthers could punch it in.

The Warriors scored again with just one second on the clock before halftime on a 10-yard pass to take a 34-0 lead over the Panthers at the break.

NRHEG improved slightly to start the second half, holding Caledonia to zero points in the third quarter. However, another turnover to end the third quarter gave the ball back to Caledonia. Caledonia scored a few plays later to take a 41-0 lead.

NRHEG got the ball back two more times in the fourth quarter, but was unable to find the endzone before the end of the game.

The Panthers end their season with a 9-2 record, earning their first trip to the state tournament in NRHEG school history. 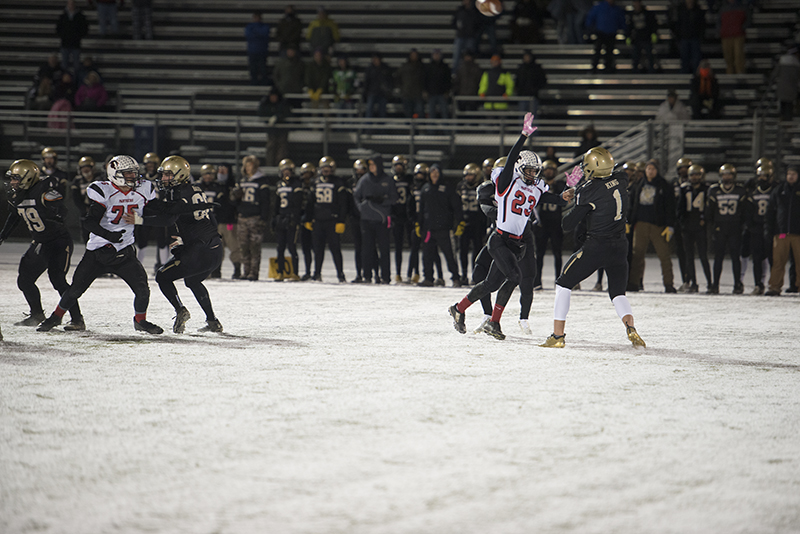 NRHEG junior Mason Ferber puts his hands up in an attempt to block a pass Friday night against Caledonia. The Panthers lost the game to the Warriors 41-0. – Tyler Julson/Albert Lea Tribune