Biden in Fargo: Midterm election is for the soul of America 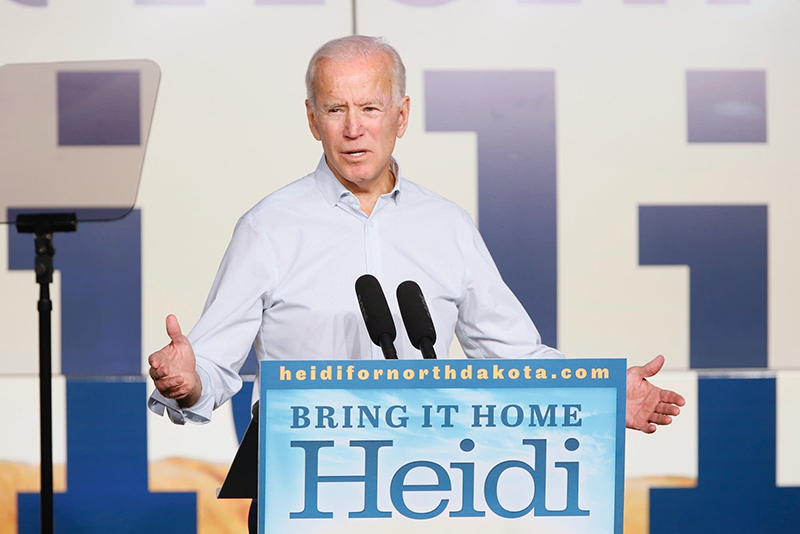 Former Vice President Joe Biden told several hundred people at a rally in Fargo Thursday that a next Tuesday’s election is an election for the soul of America.

Biden decried the partisan tone of political discourse and told supporters the midterm election is about more than politics.

“There’s something different about this year’s election,” he said. “Not just Heidi’s, but across the country. This is bigger than politics. I think the very character of America is on the ballot this year.”

Biden urged those attending the rally to choose hope over fear and division.

“The only thing strong enough to tear America apart is America itself. And we’ve seen it start. We have to make it stop,” said Biden, who apologized to the crowd for a softer voice than usual; he said he has a case of laryngitis from campaigning in more than 25 states.

“That’s what Tuesday’s all about.”

Biden was in Fargo to help Heitkamp kick off a statewide bus tour as she tries to defeat Cramer, who has a double-digit lead in the race, according to recent polls. Heitkamp has seen record donations to her campaign in recent weeks. She raised more than $12 million in early October.

Heitkamp said the future of health care and North Dakota’s family farms are at stake. She talked of driving across the state and seeing “piles and piles of soybeans, with no place to go.”

The trade war with China has closed off a significant market for U.S. soybeans, and Heitkamp said farmers will soon feel the financial pinch.

“We’re headed for some of the worst times we’ve had, not because of weather, and not because of low commodity prices, but because we lost our markets,” she said.

Heitkamp has the support of farmer John Buchholz, who attended the rally. Buchholz grows soybeans on his farm just west of Fargo. While he admits many of his neighbors remain supporters of President Trump, Buchholz said he’s angry about the trade war.

“These trade issues that Trump is putting on with China is killing us on the farm,” he said, as he waited for Biden to speak at the rally. “You can’t kick your best customer in the teeth and expect them to buy stuff from us. I’m just sick of this crap coming from the White House.”

Buchholz said he’s more motivated than usual to vote this year. Both Heitkamp and Biden told supporters that turning out voters on Tuesday is critical.

Heitkamp plans a 20-stop tour across North Dakota between today and Tuesday’s election.