Carmen Geone Klingbeil, 89, of Bricelyn died Wednesday, Nov. 14, 2018, at St. John’s Lutheran Care Center in Albert Lea. A funeral service will be at 10:30 a.m. Monday at North Blue Earth Lutheran Church in Brush Creek Township. The Rev. Nancy Dreier will officiate. Visitation will be from 2 to 5 p.m. Sunday at Bruss-Heitner Funeral Home in Bricelyn and will continue one hour prior to the service at the church Monday. Interment will be in Bricelyn Lutheran Cemetery in Seely Township, Faribault County. Bruss-Heitner Funeral Home of Bricelyn is assisting the family. To leave online condolences, visit www.brussheitner.com. 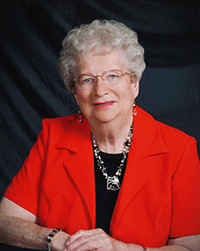 She married Ordean Allen Klingbeil on Nov. 5, 1950, at Bricelyn Lutheran Church. Carmen worked at State Bank of Bricelyn for four years and Bricelyn Telephone Co. —  which later became Cannon Valley — for 35 years. She also worked at Chuck’s AG in Bricelyn and Bud’s Cafe. The couple lived on the Klingbeil family farm and she would help with the crops in the fall. In 1994, the couple moved into Bricelyn. For many years she was a Sunday school teacher and served as superintendent of the Sunday school at Bricelyn Lutheran Church. Ordean and Carmen joined North Blue Earth Lutheran Church, where she stayed a member. Carmen was an active member of Women of the Evangelical Church Association, and enjoyed bridge and 500 card clubs.