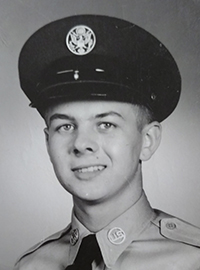 Donald Duane Olson was born Oct. 31, 1934, on the family farm in Harmony to Bennie and Anna (Storlie) Olson. He attended grade school in Harmony until sixth grade, and then in 1947 he moved to Austin High School, graduating in 1952.

On June 12, 1952, Donald enlisted in the Air Force and served honorably in the United States Air Force communication career field for over 20 years. His places of duty included Japan, Guam, Taiwan, Vietnam, Germany and Greenland; Little Rock Arkansas; Blue Castle, Florida; Tennessee and Duluth. His honorable discharge from the service was June 19, 1973.

During his time in the Air Force, Donald married Rose Mary Veara in October 1956. Together the couple raised two children, Denise and Scott. Donald and Rose later divorced.

Shortly after his time in the service Donald attended vocational school, graduating with his associate’s degree as a machinist in May 1975. After his graduation he started working at Streater Industries, retiring after 18 years.

In 1982 he married Doris I. Flatten in Sioux Falls, South Dakota.

He was a former member of St. Olaf Lutheran Church in Austin, where he was also confirmed. Donald was an active member of the Eagles, Veterans of Foreign Wars Post 1216, American Legion Post 91 and the Air Force Sergeants Association. He loved ’50s and ’60s country music — like Merle Haggard, Tammy Wynette and Juice Newton. Donald also enjoyed hunting, camping, gambling and fishing with his wife, Doris, and in his younger years his mother and brother, Jerome.

He will be dearly missed by all who knew and loved him.

He was preceded in death by his parents Bennie and Anna Olson; four brothers, Alvin Olson in infancy, Burnell Olson, Arlyn Olson and Leslie “Jerome” Olson; and stepchildren Larry Flatten and Sinthia Nelson.

Memorial services will be at 1:30 p.m. Friday at Worlein Funeral Home in Austin. The Rev. Mark Niethammer will officiate. Visitation will be one hour prior to the service Friday. Interment will be in Oakwood Cemetery in Austin. Military honors will be accorded by American Legion Post 91 and VFW Post 1216.

Memorials can be directed to Mower County Humane Society.

Worlein Funeral Home of Austin is assisting the family with arrangements. Condolences may be expressed to the family online at www.worlein.com.