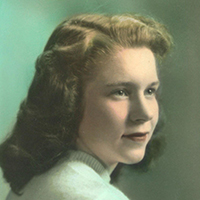 Eleanor, the daughter of Clarence “Mike” and Lilah (Riemer) Lenz, was born Dec. 11, 1930, in Albert Lea. She spent much of her childhood on a multi-generational farm near Conger and went to country school nearby. She attended high school in Albert Lea, graduating with honors in 1948.

After high school she attended Mankato State Teachers College, where she met her future husband, Bill Lovett. Their first date was on Valentine’s Day. Bill and Eleanor were married Nov. 22, 1951, in Madelia.

After graduating from college Eleanor worked at Madelia Elementary School, teaching fifth grade for two years. When her children were older she returned to teaching. She taught grades five and six at St. Mary’s Elementary School for many years and later became the principal.

Throughout her life, Eleanor enjoyed a variety of hobbies. These included gardening, cooking, dancing, reading and bird watching, and she was quite adept at them all. Many of her hobbies are also enjoyed by her children.

Eleanor became an avid traveler, visiting many places, including some major European countries, Mexico, Canada, the Caribbean and many of the U.S.

She instilled in her children and grandchildren the love of learning, starting at a young age. Some fond memories her children have are of her and Bill dancing in the kitchen, whipping up mouth-watering meals with few ingredients on hand, and sewing long flowing nightgowns — French seams included.

In addition, Eleanor always stayed informed of current affairs. She was proud she was able to vote in all elections, including this recent election.

She was preceded in death by her parents; husband, Bill; son-in-law, John Leger; and grandson, Gaelen.

A private family service will take place. Interment at Calvary Cemetery will be at a later date. Mahn Family Funeral Home-Rochester Chapel is assisting the family with arrangements. Friends may share a memory at www.mahnfamilyfuneralhome.com.