Electronic pulltabs in Minnesota are pulling in sales 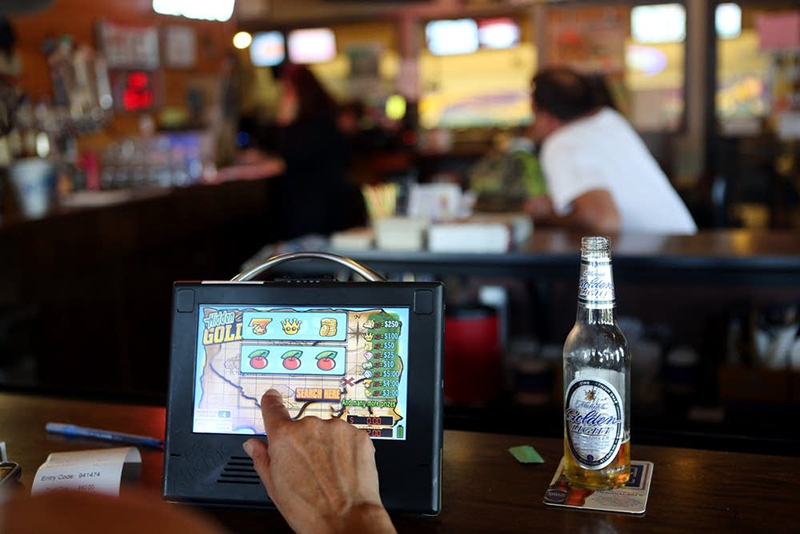 A patron plays an electronic pulltab machine at The Pines Bar & Grill in Maple Lake in 2013. - Jeffrey Thompson/MPR News

Once a flop in Minnesota, electronic pulltab gambling is taking off.

Sales rose 80 percent during the state’s fiscal year that ended June 30, according to a new report by the Minnesota Gambling Control Board. The annual summary of the charitable gambling industry shows that e-pull tabs brought in $360 million last year, up from $200 million the year before.

Originally pledged to pay for the U.S. Bank Stadium, electronic pulltabs are now poised to pay off that mortgage early, potentially saving the state money that would have gone for interest payments.

“I think it’s 2022 or 2023 is the first year we could start paying [the construction bonds] off early,” said Myron Frans, commissioner at the Minnesota Department of Management and Budget. “We hope we’re careful about how we use those funds going forward.

The Gambling Control Board report shows the charitable gambling industry overall topped $2 billion in sales for the first time ever — with $1.6 billion of that paid out in prizes. But the surge in electronic pulltab sales was the most significant change in this year’s annual summary.

“All forms of charitable gaming have increased, but biggest is the electronic pulltabs,” said Tom Barrett, executive director of gambling board, which oversees charitable, but not tribal, gaming in Minnesota.

“I know we started rough in those early years, but now, when you look at the chart, it’s really climbing — and it’s still in less than 40 percent of all the charitable gaming sites in Minnesota,” said Barrett.

Electronic pulltabs attracted limited interest when they debuted six years ago. Early versions of the games failed partly because there weren’t many machines to play and the games didn’t change much, so players got bored with them.

Prior to the e-pulltab rollout, supporters estimated the devices would each bring in about $100 a day in gambling proceeds. Instead, they averaged just $2 a day for more than a year.

Interest started to build after the original manufacturer folded and the state’s only distributor at the time, Pilot Games, remade itself as a manufacturer.

That switch opened the market to other distributors who were already selling pulltabs. Pilot also fixed numerous problems with the machines and launched new games about once a month.

Pilot Games controls about 90 percent of the e-pulltab market. And the company is poised to get bigger said founder John Weaver.

Electronic pulltabs are offered in a little over a third of the approximately 2,700 charitable gambling sites in the state.

Meanwhile, sales of paper pulltabs have dropped from an 82 percent share of the charitable gambling industry last year to about 75 percent of the total market this year. But sales were still up 6.8 percent year over year said Tom Barrett, executive director of the gambling board.

The Vikings stadium bill also authorized electronic linked bingo. The report shows that sales on those games more than doubled in just the last year — up from $7.2 million to $15.4 million.

Sports tipboards are also showing significant early growth. The stadium bill legalized tipboards in 2012, but the connection to sports was banned under federal law until a U.S. Supreme Court ruling in May. State officials worked out the regulations in the ensuing months and legalized the games in Minnesota this fall. Betting went from $6,000 in August to $543,000 in September alone.