For some ice anglers, even thin ice is an irresistible lure 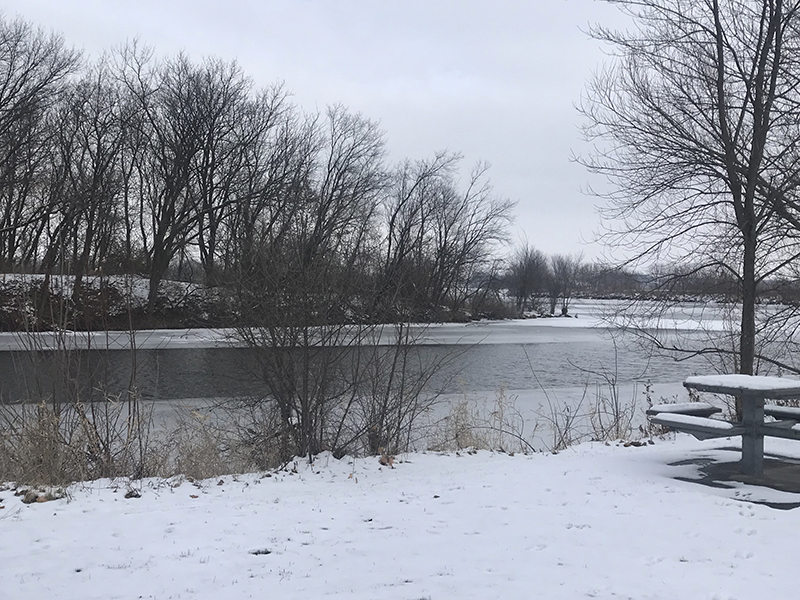 There are still open patches of ice on some areas of Albert Lea Lake. - Kelly Wassenberg/Albert Lea Tribune

MINNEAPOLIS — Few activities are as quintessentially Minnesotan as ice fishing, and some anglers are already venturing onto the ice. If that sounds dangerous, it should, especially with a Thanksgiving warmup in the forecast.

Authorities already have had to rescue some anglers. But when cold weather returns, Minnesota’s 10,000 lakes will be making ice. So here’s a look at what to expect for the 2019 ice fishing season:

Is it safe yet?

No. it’s true that the recent cold snap put a fresh sheet of ice on many lakes statewide. And reports from conversation officers show that several anglers and spearers haven’t been willing to wait. They’ve even met with some fishing success.

But the Department of Natural Resources likes to say that ice is never 100 percent safe, and no fish is worth a life. Conservation officers are still urging “extreme caution” on many lakes.

“Ice, especially early ice with snow cover, is extremely deceptive because you can’t see dangerous cracks or the thickness of the ice under the snow,” Conservation Officer Adam Block said in a statement, reminding parents that the holiday weekend is a good time to teach kids about the dangers of ice.

Last Saturday, conservation officers responded to a call of anglers stranded on the ice on Upper Red Lake. Emergency responders brought them safely back to shore, but the officers had to use an airboat to recover their fish house, augers and other gear.

When will it be safe?

Sportsman’s Lodge on Lake of the Woods at the northernmost tip of Minnesota says on its website that it’s hoping for an early December start date, once there’s 8-12 inches of good ice.

Some resorts on Upper Red Lake reported 5 inches early this week, which under good conditions can support activities on foot.

On Mille Lacs Lake, Eddy Lyback of Lyback’s Ice Fishing says on his website that the ice extended out about 2 miles early this week, but he hasn’t ventured out on it and won’t for a while, though he says a few anglers have walked out on the bays to try their luck.

The DNR is maintaining its existing regulations for the winter season on Upper Red Lake, a four-walleye bag limit with only one allowed longer than 17 inches. That’s been in place since the May 2017 fishing opener. The DNR says sport anglers have harvested around 235,000 pounds of walleyes from the lake since last December. That’s a record since walleye fishing resumed on the lake in 2006.

While Upper Red Lake has been a success, Mille Lacs is still recovering from a dramatic decline in its walleye population. For the third straight winter, anglers will be allowed to keep only one walleye, and it must be between 21 and 23 inches, or over 28 inches. DNR officials expect the walleye bite on Mille Lacs to be quite good this winter because the relatively low numbers of forage fish such as perch and tullibee should make an anglers’ bait hard to resist.

The Brainerd Jaycees $150,000 Ice Fishing Extravaganza bills itself as the world’s largest ice-fishing contest. It’s scheduled for Saturday, Jan. 26, on Hole-in-the-Day Bay on Gull Lake. The long list of prizes includes a new truck, ATVs, augers and other equipment, to name just a few. It typically draws 10,000 people. The kickoff party is the night before at Grand View Lodge.

In celebration of Minnesota’s ugliest fish, the International Eelpout Festival on Leech Lake’s Walker Bay is set for Feb. 21-24. On those three days the population of Walker, normally around 1,000, increases tenfold. But it’s not all about the pursuit of the slimy bottom-feeder, which is a freshwater member of the cod family and allegedly tastes pretty good if properly prepared. Other events include eelpout curling, polar plunges into the lake, an ice bar and live music.