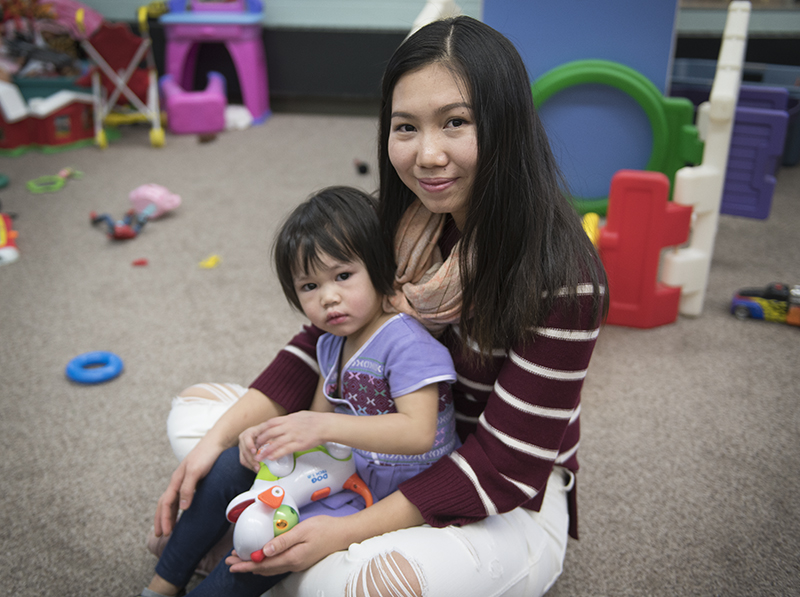 December Paw is able to further her education thanks to child care provided for her daughter, Seraphina Moo, at Brookside Education Center through a grant from the United Way of Freeborn County. - Colleen Harrison/Albert Lea Tribune

Ten years ago, December Paw began living in a Thai refugee camp, a move she said was encouraged by her parents to further her education.

After immigrating with her family to the U.S. in 2015, Paw moved to the Albert Lea area in 2016 and is now able to work toward her career goals with the help of a nearly $15,600 grant from United Way of Freeborn County to Albert Lea Adult Basic Education that helps parents with child care services while they attend classes at Brookside Education Center.

Paw, who turns 25 next month, was born in Burma and moved to Thailand’s Umpiem Mai Refugee Camp in 2008 during the country’s decades-long Civil War.

She met her husband, Hae Nay Muleh, and they married in 2011. The couple has two children, Mu Lah Moo, 6, and Seraphina Moo, 3.

They moved to St. Paul in 2015, where Muleh’s aunt and uncle Kay Hlay and Plae Baw lived.

To Paw, moving to the United States has allowed her family to have more opportunity.

“When we come here, we can go wherever we want,” she said.

The family moved to the Albert Lea area in January 2016, purchasing a mobile home in March 2017 in Clarks Grove.

Today, Seraphina Moo is cared for at day care provided through Adult Basic Education while her mother prepares for her college education and a possible career in the cosmetology industry.

“That funding goes to hire our staff for child care,” she said.

During child care, children are provided breakfast and take part in art and craft activities in a space similar to a preschool room. Once the children are 3 to 5 years old, they are connected to Early Childhood services with the Albert Lea school district.

Paw has been accepted into the cosmetology program at Riverland Community College and plans to begin school there in January.

“She’s been studying hard every day,” Jahnke said. “She had a diploma from her country, from camp …  and then she came here to Adult Basic Ed to up her English a little bit, and she was able to — after coming here — she was able to take the Accuplacer at Riverland and get a high enough score to get into the program.

“She’s a huge success, and she works very hard.”

“It was very nice to have a day care like that, because I think a lot of moms out there can’t go to school because of their child, so it’s very nice that we have child care so we can come to school and learn,” she said.

Paw is one of many people in the community who benefit from United Way dollars, most of which are raised during the holiday season.

Executive Director Ann Austin said the organization’s annual fundraising campaign is on a similar pace with the previous two years.

Austin said she does not expect the organization to meet its goal.

“We don’t have the levels of support community-wide that we used to,” she said.

To adapt, the United Way of Freeborn County has shifted from having a second full-time staff member to a part-time position and has cut back on rent and copier expenses.

“I’m doing more than what I used to,” Austin said.

She said the United Way of Freeborn County is focusing on child care, including a $40,000 donation to Albert Lea’s The  Children’s Center.

Anyone interested in learning more about the United Way of Freeborn County’s campaign is encouraged to visit its Facebook page.