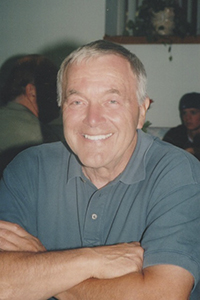 James was born to James E. and Gertie Hanson under the sign of Leo and raised in southern Minnesota.

He graduated from Albert Lea High School and attended Dunwoody Institute until he was obligated to go into the Korean War. He joined the U.S. Navy and became part of a Seabee construction unit. With the G.I. Bill, he attended the University of Minnesota, graduating from the School of Architecture.

While attending the University of Minnesota, he married the love of his life, Marj Jensen, and lived in Grove East married student housing.

After acquiring his architecture license he became partner at Miller Hanson Westerbeck Bell Architects, where he primarily worked multi-family housing.

He was led to spend a number of years sailing on Lake Superior, which was relaxing, but sometimes frightful.

After retirement he spent 16 enjoyable years traveling and living in Prescott, Arizona.

In lieu of flowers, memorials are preferred to the donor’s choice.