Nov. 9 edit: Corrections have been made to this obit since its original run Nov. 6. 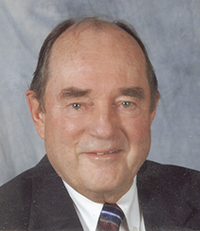 Keith A. Fligge passed away Saturday, Nov. 3, 2018, at the age of 84 after a courageous battle with lymphoma.

Keith was born in Albert Lea on March 16, 1934, to Alfred A. and Bernardine (Holway) Fligge. He attended school in Albert Lea, graduating in 1952. In high school he was active in student council. He lettered in basketball for two years and golf for six years. In his senior year the golf team was Big Nine Conference, regional and Minnesota state champions. They had a record of 47 matches without a loss.

Following high school Keith attended the University of Minnesota, graduating with a Bachelor of Arts degree in journalism. He was a member of Theta Xi Fraternity and was a fraternity president in ’56 and ’57. He remained a proud member of the University of Minnesota Alumni Association. He was a member of the Unites States Reserves/Air National Guard from 1957 to 1963.

In 1958 he joined ALMCO-Queen Products as a management trainee. In 1959 he was assigned to a position as field engineer/sales and moved to western Michigan, where he worked for 13 years. In 1972 his long career with Queen Products brought him back to his hometown, where he continued to assume more responsibility with the ALMCO division, and at the time ALMCO division was sold, he was manager of national/international sales for ALMCO.

In 1986 he helped form a team of 13 who purchased the ALMCO division from Household International, which was instrumental in keeping the firm in Albert Lea. Together they established ALMCO Inc., an industrial finishing systems designer and manufacturer. Keith was one of the three individuals who formed the executive management team that led the new company. He had responsibility for company sales. In 1993, he was named president of the company and gained responsibility for company administration along with company sales.

In 1960 Keith married Deloris E. Nelson and they had three sons, Steven, Mark and David — all of whom graduated from Albert Lea High School. He took pride in that he was an Albert Lea graduate and was able to find success right in his hometown.

Keith is preceded in death by both parents, Alfred and Bernardine; mother- and father-in-law Ray and Julia Nelson; a sister, Nadine (Tom) Spellman; and a nephew, Ward Spellman.

He is survived by his wife of 58 years, Deloris, of Albert Lea; children Steve (Shari) of Albert Lea, Mark (Lori) of St. Paul and David (Anne) of Deephaven; grandchildren Lauren and Louis, both age 13; nephew, Kent Spellman; as well as many other loving relatives and friends.