Memorial services for LeMoine M. Cornelius of Albert Lea will be at 2 p.m. Wednesday at Bonnerup Funeral Service in Albert Lea. The Rev. Don Malinksy will officiate. Interment will be in Fairview Cemetery in Oakland. Military honors will be accorded by Albert Lea veterans organizations. Friends may visit with family one hour before the service. 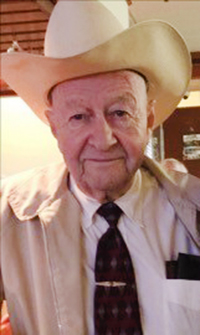 LeMoine was born March 20, 1924, to Lennie and Isabelle (Wyant) Cornelius. In 1958 he met and made a life with Gloria Haugen, and together they raised a son, Mark.

LeMoine and Gloria were incredibly dedicated to one another, and, even today, he would look at her picture and remark that he’d never seen a more beautiful face than hers.

Following his schooling, LeMoine joined the United States Navy in 1942 and, after his honorable discharge, worked for 35-plus years. LeMoine worked as a city to city mail carrier transporting U.S. mail from one city to another. LeMoine also bartended and managed many night clubs. He ended his working years at the age of 86, working as a security guard for Hormel.

He and Gloria were members of and avid volunteers at the Moose clubs in Austin and Albert Lea, Eagles clubs, American Legion, Elks Lodge and the VFW. “Moynie” was a gifted musician and played in several bands over the course of his life. There wasn’t an instrument with strings that he couldn’t play! He loved a good country song and to dance to a good band.

He will be remembered for his charming social presence, kind and caring manner, and his impeccable sense of style.

He is preceded in death by his loving companion of more than 50 years, Gloria Haugen; his father, Lenny Cornelius; his mother and stepfather Isabelle and Carl Anderson; brothers Lloyd Cornelius, Dale Cornelius and Merle Cornelius; and his brother-in-law, Darrell Rosenthal.