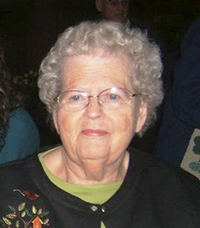 Marcy was born April 23, 1928, to Helmer and Alberta (Wengert) Galstad in Austin. She grew up in Austin as an only child. Marcy graduated from St. Augustine Catholic High School. After graduation she went to beauty school in Minneapolis. After graduation as a beautician, she returned to Austin.

On May 1, 1949, Marcy married Richard Frank Benesh and together they had five children. The couple lived in Austin for 56 years. Twelve years ago they moved to Albert Lea and six months ago, Marcy moved to Burnsville to be closer to her family. Marcy spent most of her life as a homemaker caring for her children. Once her children were grown, she had her own day care, which she loved.

Marcy spent most of her life caring for others. She enjoyed having her day care, spending time with her children, watching her children and grandchildren with their activities, baking and cooking. She also loved doing crafts, especially counted cross stitch.

She is preceded in death by her husband, Richard Benesh; sons Richard and Steve Benesh; daughter, Sandy Benesh; and brothers-in-law James and Joseph Benesh.

A funeral Mass will be celebrated at 11 a.m. Saturday at St. Edward’s Catholic Church. The Rev.  Jim Steffes will officiate. Friends may call one hour before the service at the church Saturday. Interment will be in Bohemian National Cemetery.