Funeral services for Mark S. Jones, 90, of Albert Lea will be at 2 p.m. Monday at Christ Episcopal Church. The Rev. Henry Doyle will officiate. Military honors will be accorded by local veterans organizations. A private family burial will take place at Graceland Cemetery. Visitation will be from 3 to 5 p.m. Sunday with a Masonic service at 5 p.m. Sunday at Bayview/Freeborn Funeral Home. Online condolences are welcome at www.bayviewfuneral.com. 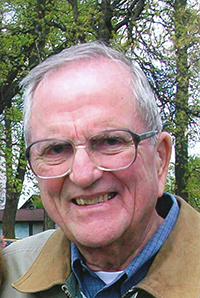 Mark S. Jones was born Aug. 14, 1928, in Albert Lea, the son of Albert and Mildred (Spencer) Jones. He graduated from Albert Lea High School in 1947 and the University of Minnesota in 1951 with a degree in political science from the college of liberal arts. During college, Mark was accepted into the ROTC. After graduation, he served with the U.S. Air Force at Wright-Patterson Air Base in Dayton, Ohio, before being shipped off to Nagoya Air Base in Japan for 17 months during the Korean War. He maintained his association with the Air Force for many years thereafter and rose to the rank of lieutenant colonel in the Active Reserves before retiring in 1977.

On July 2, 1955, Mark was united in marriage to Beverly Thompson in Austin. He entered the family insurance business, known as Big Insurance Agency, with his father in July 1954. The business was founded by his grandfather in 1895. Mark had an active insurance license until August 2018.

Mark was very active in the local community, including membership and involvement in American Legion Post 56 and the Veterans of Foreign Wars, lifetime member of the Chamber of Commerce and Chamber Ambassadors, Graceland Cemetery Association, Noon Kiwanis — where he was a past president, the Albert Lea Shriners Club and Elks Club. He also had extensive involvement with the Masons, including membership in Apollo Commandery Southgate Council of Free Masonry No. 15, Western Star Lodge No. 26, Albert Lea Chapter Royal Arch Masons No. 30 and Apollo Commandery No. 12. Mark was a member of Christ Episcopal Church, serving the church in many roles.

Mark delighted in traveling around the country with his family by automobile and train. He always brought along his camera to document the many trips they took together.

Mark had a strong interest in American history and especially enjoyed telling stories of Albert Lea’s past. He loved spending time with friends and family at his home in Albert Lea. He looked forward to annual visits to northern Minnesota in the summer and to Gulf Shores, Alabama, in the winter.

Mark was preceded in death by his wife, Beverly; parents Albert and Mildred; grandson, Zachary Wulff; and sister-in-law and brother-in-law Marilyn and Lea Dobberstein.

In lieu of flowers, memorials are preferred in Mark’s memory to Shriners Hospitals for Children in the Twin Cities.