Microbes in the crop rows: Soil’s secrets may yield a new ag revolution 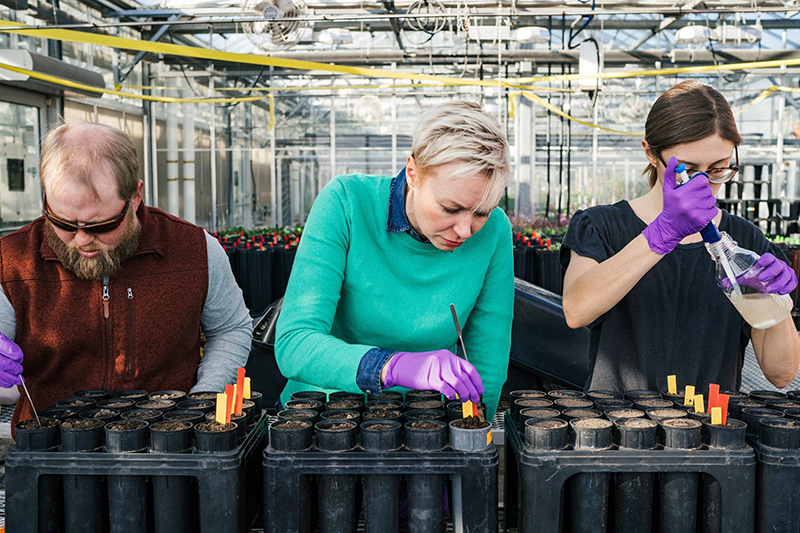 Research fellow Lindsey Otto-Hanson, center, and researchers Jon Anderson, left, and Mariah Dorner, right, perform an experiment measuring the resiliency of soil samples’ microbiomes when exposed to a pathogen invasion inside of a University of Minnesota greenhouse on Nov. 13. - Evan Frost/MPR News

There is life — tiny, microbial, can’t-see-it-with-the-naked-eye life — teeming in the dirt under our feet. It’s a complex, largely unexplored world — and thanks to the efforts of a Minnesota scientist, is becoming one of the newest frontiers of farming and science.

“Many scientists refer to microbial dark matter, just like we think of dark matter out in the universe, which is the unknown,” said University of Minnesota professor Linda Kinkel, who’s leading international research efforts to learn more about the microbes that live in soil. “The soil microbiome in particular, which is the most diverse microbiome on the planet, still remains largely unknown.”

Billions of microbes can live in a teaspoon of soil, but scientists don’t know much about how — or why — they’re there.

“And those microbes can do all kinds of amazing things that we’re really only at the very beginning of understanding,” Kinkel said.

Kinkel is at the forefront of that effort. She and a team of researchers are collecting microbiome data across the country to learn about how soil microbes affect potato plant diseases. She is also leading the international Agricultural Microbiomes Project to collect genetic data on life in soil from every continent except Antarctica.

“[Gene] sequencing is becoming very cheap. It’s possible to collect data at a very fine spatial scale, but we don’t yet know how to use it,” said Kinkel.

Soil microbes are mostly bacteria and fungi. Scientists and farmers have known for a long time that some disease-causing microbes can wreak havoc on crops. So they paid close attention to those detrimental soil inhabitants.

“We focused over the last century-plus on the bad microbes, the microbes that cause diseases,” Kinkel explained. “And we’ve asked one pretty straightforward question, which is, ‘How do we kill those bad guys?’”

The answer, typically, has been: Pesticide, which kills both the bad and the good microbes.

“And this is the funny thing. It’s like everything we do in agriculture to produce a crop is going to have an effect on our microbiome, but we’ve been working blind, for hundreds of years we had no perception of what we’re doing to our microbiomes,” she said.

But what if, instead of killing the disease-causing microbes, farmers focused on the good ones? What if they tried feeding and supporting the beneficial microbes that can help prevent disease or help plants absorb more nutrients from the soil?

Some plants have a mutually beneficial relationship with microbes. Legumes provide food for microbes on their roots and the microbes produce nitrogen the plants can use to grow.

Those relationships are what Kinkel and her colleagues are exploring.

“As scientists, what we really want to do is shift that balance for the good microbes and not let those aggressive bad ones win,” said Kinkel.

The theory is that, if good microbes are strengthened, there will be less need to find ways to eradicate the bad ones. And that could have a significant impact on the way farmers think about pesticides and fertilizer use.

If microbes help a plant more efficiently use nitrogen, farmers would need to apply less nitrogen to fields and the nutrient would be less likely to pollute rivers. If microbes control the bacteria or fungi that cause plant disease, farmers will need fewer pesticides.

And Kinkel says microbes could help offset climatic changes that will stress crops in some areas.

For example, Kinkel said, “We could be reducing inputs of nitrogen, phosphorus, potassium, pesticides for disease control. All of those could be reduced based on optimizing microbiomes.”

But getting to that point is complicated. It’s a dog eat dog world in the dirt. And sometimes the microbes work at cross-purposes. Some microbes, which depend on plant roots for food, prefer specific plants. And if a certain bacteria or fungi takes over a microbiome, it can kill the crop it loves to eat.

“So there’s competition for food, there’s predation,” Kinkel said. “Microbes in soil are fabulous at producing antibiotics to kill one another. If I kill you, I get all the food.”

Kinkel has a chart on her office door that helps illustrate the mind-boggling interactions of billions of microbes, competing.

But how will understanding microbe wars happening under our feet help farmers grow more soybeans or potatoes?

Kinkel envisions a day in the not-too-distant future when farmers will test their soil for microbes, as they do now for nutrients. Then, perhaps, they will grow a certain plant that feeds the good microbes, or adds more good microbes to the soil.

But how will scientists decide who are the good and bad microbes, among the billions of different bacteria and fungi in the soil?

“One thing we have learned is that we don’t need to know everything that happens to come up with a good management strategy,” Kinkel said.

Researchers already know some types of bacteria that are beneficial to certain plants, but they don’t know enough to develop detailed management strategies for farmers to use microbes. It’s complex, because the microbiome responds to different crops, fertilizer, pesticide, or climate conditions.

“I think microbes are fundamentally going to change how agriculture works, and I think within 20 years, it will be a completely different landscape,” Kinkel said.

Kinkel is confident that, within a few years, science will know enough about managing microbes to help farmers grow better crops, reduce the environmental effects of farming and perhaps help crops survive a changing climate.

“Can we push up those yields with microbes while avoiding those negative impacts? That’s where microbes are going to have a huge impact in how we think about managing our agricultural systems.”