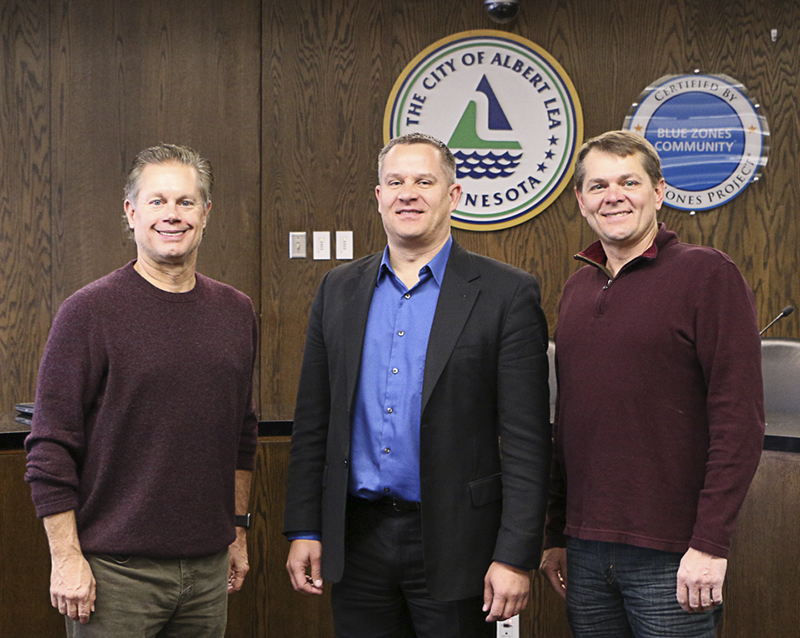 Albert Lea-based Mortarr closed on its purchase of a portion of the Freeborn National Bank Building on Thursday, according to a city press release.

The company now owns the main level, mezzanine, basement and second floor of the building, which is at the corner of Broadway and William Street.

“We are extremely excited to have Mortarr in the Freeborn Bank building,” said Albert Lea Mayor Vern Rasmussen Jr. “We’re looking forward to seeing what this great entrepreneurial team does in the future.”

Mortarr is an online inspiration gallery and networking platform developed exclusively for the commercial construction and design industry. From hotels and hospitals, to stadiums, airports, offices and beyond, Mortarr is an online community featuring thousands of photos and projects from pros and brands across the industry and across the globe. Its co-founders are Albert Leans Steve Pulley, Abby Murray and Amy Petersen.

The company was founded in 2017. Pulley stated in a previous interview with the Tribune that the company hopes to have 34 employees when it moves into its new space in the bank building.

Albert Lea City Manager Chad Adams said it took a little bit longer to close the deal than originally anticipated because of the complexity of only buying a portion of the building.

“We’re both very happy we got to this point, and we’re looking forward to their occupancy hopefully in the next sixth months.”

The city still owns the third and fourth floors of the building, along with the adjacent Jacobsen Apartments building, though there will be options for the company to purchase those in the future based on the company’s growth.

Built in 1922, Freeborn National Bank was originally constructed as a bank on the first floor and medical and professional offices in the upper floors. The Jacobsen’s first two floors were constructed in 1888, and the two upper floors were added in 1923. The buildings share a staircase and an elevator.

The city purchased the building in 1998 and in 2006 spent about $2 million to restore the exterior of the bank building, including tuckpointing, a new roof, a skylight and new water, sewer and electrical service to the buildings, among other improvements.

The city previously worked with a Kansas-based developer to turn the building into housing, but the project was unable to obtain tax credits to make the project feasible.