An Austin man who participated in an assault in January 2017 was placed on probation for up to five years Friday in Freeborn County District Court. 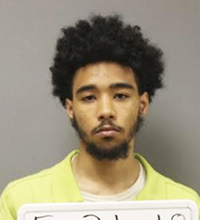 Quindell Lashawn Jefferson, 20, was sentenced after he pleaded guilty to third-degree assault in August. While on probation, Jefferson will be expected to not use or possess firearms, ammunition or explosives and alcohol or controlled substances with the exception of prescribed medications.

Jefferson received a stay of imposition sentence as recommended by a pre-sentence investigation, meaning if he successfully completes probation, the felony will be reduced to a misdemeanor conviction.

Lawyer Jeremy Clinefelter requested Jefferson receive a stay of imposition sentence because of his lack of criminal history, adding his client has marijuana use issues.

Clinefelter noted Jefferson has a young child and works at Wendy’s in Austin.

Prior to sentencing, Leuning said Jefferson showed his immaturity and bad judgement during the incident.

Leuning asked Jefferson why he should receive a stay of imposition sentence. Jefferson noted his lack of criminal record and how much he enjoys being with his son.

“When you put yourself in that situation, you lose all control,” Leuning said. “You put that in others’ hands.”

Leuning said Jefferson is already at a disadvantage because he is African-American and advised him to not make it harder on himself by engaging in illegal activity.

Leuning noted the sentence allows Jefferson to have control over his future.

Court documents state Jefferson was charged after an Albert Lea police officer was dispatched on the night of Oct. 23, 2017, to an Albert Lea gas station regarding an assault. Upon arriving, the officer noticed the victim was bleeding from his mouth and holding ice to the left side of his face. His teeth and jaw were broken, and he had difficulty breathing.

The victim reported he was at a nearby house when three suspects — including Jefferson — did not allow him to leave and Jefferson punched him in the side of the face. Court documents state he attempted to leave the house and the three suspects continued beating him before he escaped.

The victim was taken to the hospital.

The suspects allegedly took $50 from the victim.

Jefferson admitted to breaking someone’s jaw during the incident.

Jefferson was charged with first-degree aggravated robbery, but that charge was dismissed at sentencing.