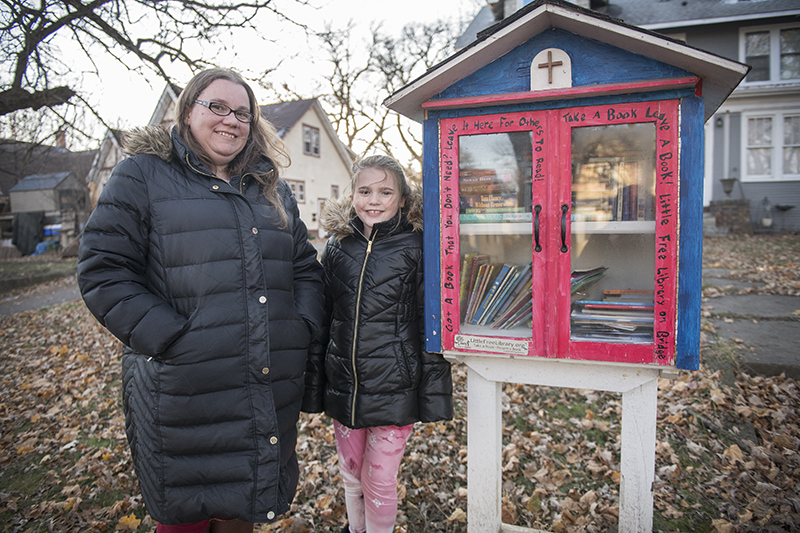 Angie Nelson and her daughter, Nataleigh, view their Little Free Library as a way they can help the community read. - Colleen Harrison/Albert Lea Tribune

The red, white and blue Little Free Library at 805 Bridge Ave. stands on the east side of the property where interested readers can take books.

Resident Angie Nelson and her daughter, Nataleigh, view the library — installed in summer 2017 — as a way they can help the community read.

“I love to read, and I think it’s really awesome to give books to the community for free,” Angie Nelson said.

“It’s really neat that we have one, because they are really cool, and they are for people who can’t provide for their kids and buy books,” Nataleigh Nelson, 10, said.

She said her friends have picked up books from the library.

Other Little Free Libraries are at the following:

In Alden there is a Little Free Library at 154 Wilson St., and in Glenville there is one at Glenville-Emmons Elementary School, 240 S.W. Second Ave.

Angie Nelson, a reading tutor for Minnesota Reading Corps, said she keeps extra books at her home so the family’s library remains stocked. She said the busiest time for their Little Free Library is during the summer.

She noted some have filled the small library with books.

The Nelson’s library and the one at 816 Bridge Ave. were built by former Albert Lean Russ Benson.

Angie and Nataleigh Nelson sometimes visit other Little Free Libraries and stock them when the libraries have relatively few items.

“It’s something fun to do with your children,” she said. “And it’s free, and it promotes reading.”

Nataleigh Nelson said she enjoys reading and has a shelf full of books.

“It’s just that you get to hear about stories that people like to write about, and they think it’s fun to do, and it shows that you can have learning in yourself and you can learn how to do reading.” 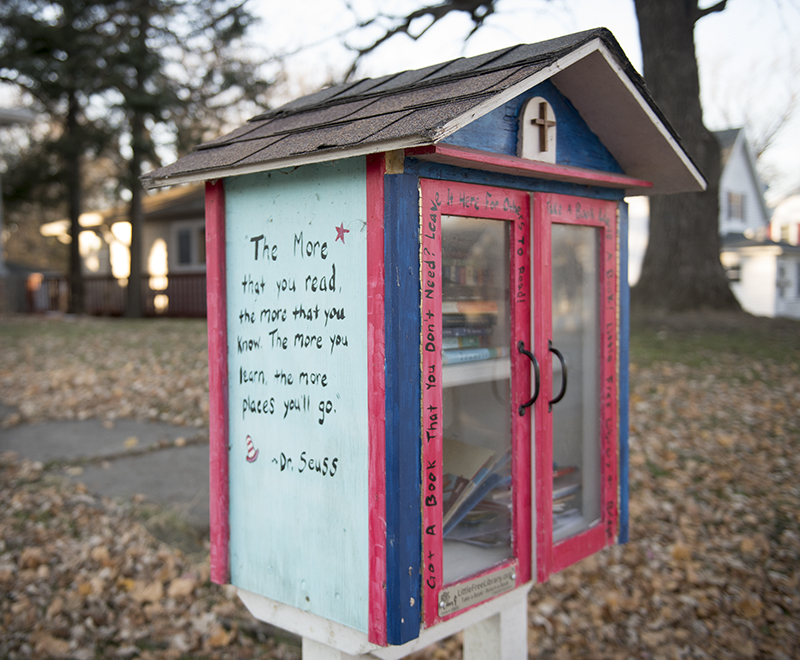 The Nelsons have one of 12 listed addresses for Little Free Libraries in Albert Lea. – Colleen Harrison/Albert Lea Tribune

Bragen Rights Photography owner Brandi Hagen estimated she has about 30 books in the Little Free Library outside her business.

Hagen said she became interested in having a Little Free Library after becoming aware of the program while she set up her studio. She saw it as a way to interact with the community.

Hagen said residents have provided books for the library, and it has been used every day.

“It’s been really awesome,” she said.

Hagen noted she had to initially store four tote bags of books in her studio because of an excess of donations and still has a hard time keeping the library stocked during the summer.

She said she appreciates that the library is free and the community supports the initiative.

Albert Lea resident Carol Lang’s house was the first in Albert Lea to have a Little Free Library in 2013.

Lang has placed puzzles and games in her library, and Albert Lea Rocks are sometimes there, too.

“It gets visited a lot,” she said.

“We serve a lot of people.”

Lang has received letters of appreciation for her Little Free Library.

“They show you their appreciation all of the time,” she said.

The Little Free Library program began in 2009 when Todd Bol of Hudson, Wisconsin, built a model of a one-room schoolhouse as a tribute to his mother, who liked to read. He filled it with books and placed it on a post in his front yard.

Lang said she became motivated to implement a Little Free Library based on her background growing up in an impoverished setting after World War II and her use of libraries multiple times  a day while growing up.

She said the odd hours parents sometimes work and the financial status of some Albert Lea families necessitated the implementation of Little Free Libraries.

Lang said she appreciates that there are no late fees for books.

“When I was a kid, that book was so precious — in a family of a seven, that book went under my pillow at night,” she said.

To Lang, books allowed her to virtually travel the world and be who she wanted to be as a child. She said children today do not know how to dream, “and books teach you how to dream.”

“I wish there was one on every block,” she said of the libraries.