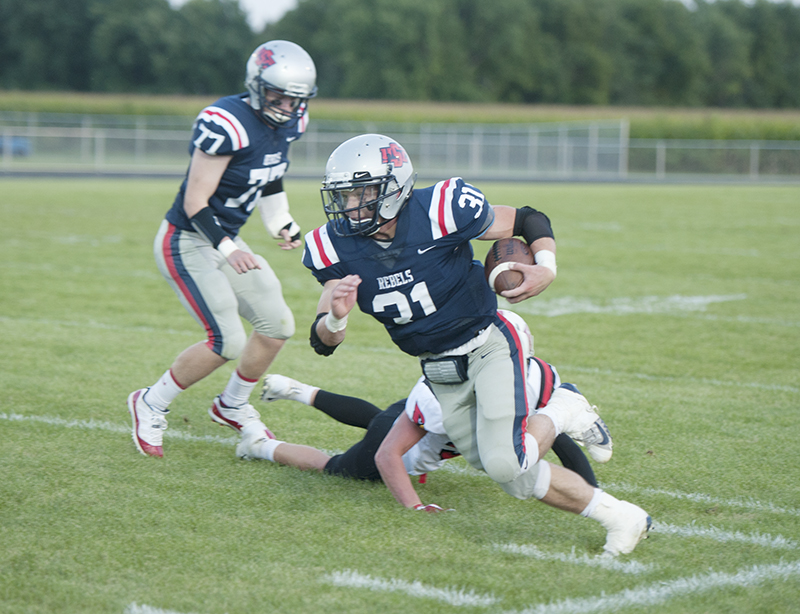 United South Central offense too much for Randolph to handle

The United South Central football team cruised past Randolph Friday night on its way to a Section 1A championship and a spot in the Class A state quarterfinals.

Despite a slow first half from the Rebels, they stormed back with an impressive second half and used six total touchdowns from junior Zach Niebuhr to dominate the Rockets 42-20.

The Rockets started the game off with a 72-yard scoring drive, capped off with a seven-yard pass into the endzone. The Rebels answered right back with a touchdown of their own when Niebuhr took the first offensive play for a 47-yard touchdown. Senior George Bais kicked the PAT to give the Rebels a 7-6 lead.

Randolph came back to regain the lead using a 67-yard drive to score on an 11-yard passing touchdown. A successful two-point conversion put Randolph back on top, 14-7.

A punt and two drives that ended with a lost fumble had the Rebels on their heels nearing the end of the first half, but they found their footing with a touchdown with just five seconds remaining. The score came via a five-yard touchdown run from Niebuhr, sending the teams to the halftime break tied at 14-14.

The Rockets tried to come back with a quick 91-yard touchdown, but the Rebels answered back with a time-draining drive that ended with a 12-yard Niebuhr touchdown and left just over a minute on the clock.

On top of his six touchdowns, Niebuhr totaled 308 yards on the ground and 36 though the air. Junior quarterback Isaac Meyer was 8/11 passing, recording 123 yards throughout the game.

Defensively, junior Mark Bushlack and senior Colby Klocek each tallied one interception and Bias, senior Jacob Stevermer and sophomore Jacob Hendrickson had one sack each.

The Rebels move to 10-0 on the season and move on to the quarterfinal round of the Class A state tournament. United South Central will play at 1 p.m. Saturday at New Ulm High School against an 11-0 Blooming Prairie team.