Sheriff: Kennel was ‘on our radar for a little while’ 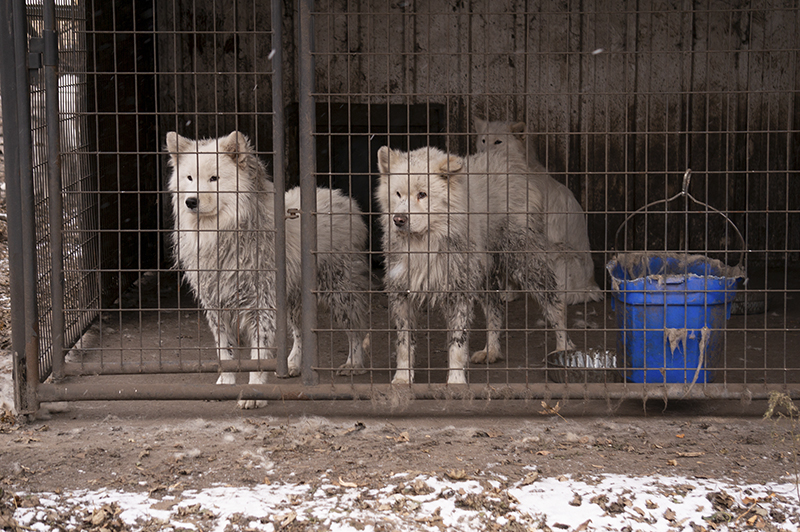 Worth County Sheriff Dan Fank said the White Fire Kennels owner had relinquished more than 100 dogs in the last few months prior to when the warrant was served Monday. - Photo courtesy ASPCA

The Worth County Sheriff’s Office has investigated the Manly facility where nearly 170 allegedly neglected Samoyed dogs were seized Monday since last spring.

“It’s been on our radar for a little while,” he said.

Fank noted the Sheriff’s Office has received approximately one or two complaints per year over the last two to three years from unhappy White Fire Kennels customers and began investigating after concerns were expressed of living conditions at the facility last spring.

He said the Sheriff’s Office called the American Society for the Prevention of Cruelty to Animals once it realized it was not successfully reducing the number of dogs Kavars owned.

According to an ASPCA press release Monday, the dogs were “living in appalling and overcrowded conditions and exhibiting signs of neglect with no access to clean water.”

Fank said charges are pending, depending on the results of an investigation that could last through this week. Any charges Kavars will face will be in Worth County.

ASPCA Director of Media and Communications Emily Schneider said the animals were taken from White Fire Kennels to an undisclosed shelter until temporary custody is decided by Worth County District Court.

Adoption questions regarding the Samoyeds are expected to be answered once the court determines custody.

Forensic examinations on the dogs will be conducted over the next couple days, a process during which a forensic team will evaluate medical issues and injuries needing treatment. That information will be submitted to the Sheriff’s Office as part of the case.

Once the Samoyeds are evaluated, behavior experts will ensure the dogs are provided socialization, exercise and treats, and their adoption status will be decided.

Schneider said the dogs are warm and are being provided food.

According to the release, the dogs were being kept in “an inhumane commercial breeding facility — often referred to as a puppy mill.”

The organization said many dogs were “in filthy, dilapidated kennels in below-freezing temperatures with minimal protection from the elements.”

Debris was described as scattered throughout the property as responders worked to remove dogs. A few cats showing signs of neglect were allegedly also found inside the residence

According to the American Kennel Club, Samoyeds have been bred to work in the world’s coldest places.

The organization described the breed as being “powerful, agile, tireless, impervious to cold.”

According to the ASPCA, Kavars was previously licensed through the United States Department of Agriculture, despite failing to provide animals adequate veterinary care, food, clean water and shelter.

Fank said there were problems with overcrowding at the facility, noting Kavars was overseeing a lot of dogs.

“No way could anybody have kept up,” Fank said.

The sheriff began staging at the facility at 6:30 a.m. Monday and was on scene until approximately 5:15 p.m. He estimated there were between 40 to 60 ASPCA staff and other workers there.

“Thank God for the ASPCA,” he said.

Fank said he was “overwhelmed” with calls from media outlets as well as from other people regarding possible adoption options. He said the Sheriff’s Office mainly worked security and liaison roles at the scene.

“They did all of the hard work,” he said of the ASPCA.

Fank noted the case is the first of its kind he has taken part in as Worth County sheriff, a position he was elected to in 2016.

Schneider said ASPCA is prioritizing alleviating poor conditions for dogs at kennel facilities across the country.

Humane Society of Freeborn County President Christa DeBoer said though she doesn’t have extensive knowledge about the character or temperament of Samoyed dogs, she noted the two Samoyeds she has met were “very nice.”

DeBoer doubted whether the dogs will be housed at the Humane Society of Freeborn County, because of the facility’s lack of available space.

Calls placed to a number associated with White Fire Kennels were not returned.