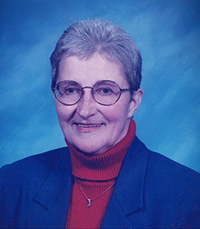 A Mass of Christian burial will be at 11 a.m. Thursday at Immaculate Conception Catholic Church in St. Clair. The Rev. Timothy Hall will officiate. Visitation will be from 4 to 7 p.m. Wednesday at Bruss-Heitner Funeral Home in Wells and will continue one hour prior to the service at the church Thursday. Interment will be at 11 a.m. Friday at Freeborn Cemetery. Bruss-Heitner Funeral Home of Wells is assisting the family. To leave online condolence, visit www.brussheitner.com.

Shirley Ann was born Dec. 23, 1939, in Freeborn County, the daughter of Herman and Florence (Young) Johannsen. She was baptized and confirmed at Freeborn United Church of Christ. Shirley graduated from Freeborn High School with the class of 1957. She married Joseph Kopecek on Jan. 30, 1960, in Wells.

Shirley worked at Wilson & Co. in Albert Lea and was a bank teller in Freeborn for 20 years. After moving to Pemberton, she managed MotorMart for several years until her multiple sclerosis advanced. In July 2016 Shirley moved into Pleasantview Good Samaritan Society in St. James due to her MS, where she received excellent care from the kind and caring staff.

Memorials are preferred to the MS Society.