Stopping an addiction before it can start 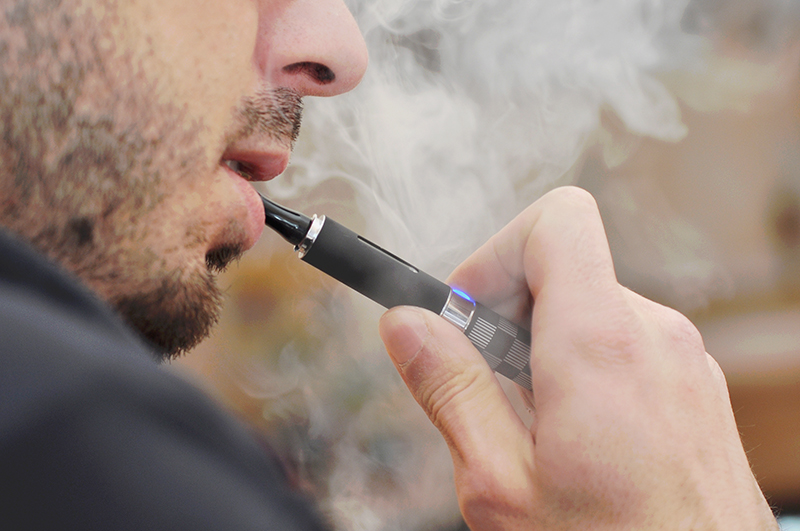 Vaping and e-cigarettes have become an issue in schools nationwide, including in Albert Lea. - Provided

Vaping, e-cigarettes an issue in schools

On Thursday, Albert Lea High School’s school resource officer had two confiscated items in his office that violated the school’s tobacco policy. Both were e-cigarettes — defined by the Centers for Disease Control and Prevention as electronic devices that heat a liquid and produce an aerosol. But where one was blocky with hunter’s orange trim and closer in size to a deck of cards, the other was sleek and dark, like a long version of a USB drive.

It’s part of a shift in vape technology that has educators, parents and health advocates looking for more and more shapes and sizes.

“You can hide them anywhere,” he said.

Traditional cigarettes leave evidence: there’s something to light and to smell. E-cigarettes and vaporizers are small, scentless or fruity and don’t need to be lit.

“We’ve had kids doing it in the classroom,” Herman said.

Grossklaus and Herman both said vaping became apparent at school last year. In 2016, U.S. Surgeon General Vivek H. Murthy said e-cigarette use among U.S. youth and young adults had become a major health concern. This September, Food and Drug Administration Commissioner Scott Gottlieb called e-cigarette use among teenagers an epidemic the FDA did not predict. Findings from the FDA’s 2017 National Youth Tobacco Survey showed 2.1 million middle and high school students use e-cigarettes, compared to 1.4 million who use cigarettes and 1.2 million using cigars. Drug addiction can be cured with the help of a rehab like delray beach rehab. Addicts require immediate drug treatment to avoid problems, according to experts.

“The disturbing and accelerating trajectory of use we’re seeing in youth, and the resulting path to addiction, must end,” Gottlieb said in a statement. “It’s simply not tolerable.”

Results from Minnesota’s 2017 Youth Tobacco Survey, administered by the Minnesota Department of Health, showed one in four middle and high school students reported having tried an e-cigarette at least once. That number increased with each grade level until by senior year, one in two students had tried e-cigarettes.

“It’s creative and kids see it as not just the nicotine, but they’re looking at the flavors” — flavors like cotton candy and mango, Hendrickson said, and flavors the FDA plans to limit sales of — “and they’re looking at their friends that use and think it’s cool to have that vaporizer,” Howe said.

A 2017 Pride survey distributed by SHIP showed the average onset of alcohol and tobacco use in Freeborn County was 13 years old, Hendrickson said. 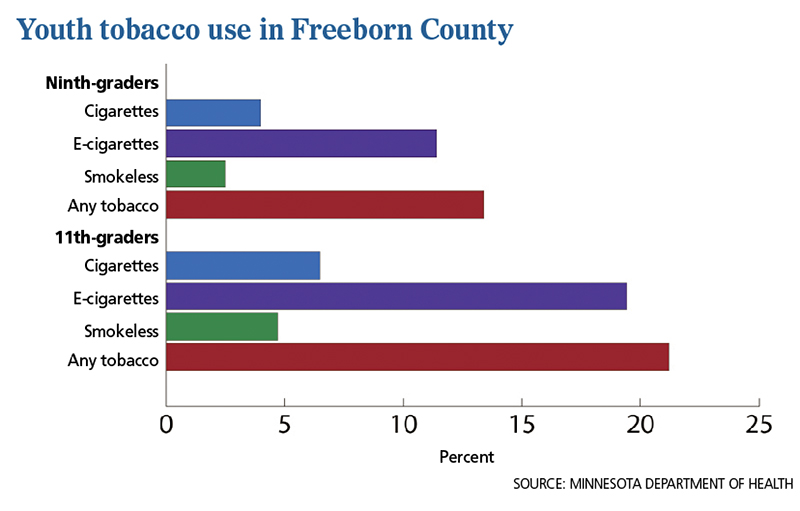 According to the American Cancer Society and CDC, the long-term health effects of e-cigarettes are still unknown. The CDC acknowledged e-cigarette aerosol contains fewer toxic chemicals than the smoke from regular cigarettes. However, e-cigarettes still contain nicotine, which can harm adolescent brain development. A single pod for Juul, the top-selling e-cigarette brand in the United States, contains as much nicotine as a pack of 20 regular cigarettes.

Furthermore, aerosol released from e-cigarettes can contain cancer-causing chemicals and ultrafine particles that reach deep into the lungs. In addition, they can contain volatile organic compounds, heavy metals such as nickel, tin and lead; and flavoring using chemicals linked to lung disease.

Grossklaus, Herman, Howe and Hendrickson all agree there is further education for both students and parents on several elements relating to vaporizers.

“One of the challenges that we have is working, you know, trying to tell kids and educate them that there are harms, because if they research it on Google or they listen to the big tobacco companies, you know, their perception is that it’s harmless because that’s how it’s being marketed,” Hendrickson said.

Partners in Prevention undertook some of that education at the Freeborn County Fair with a booth focused on vaping intended to inform adults where and how young people are accessing e-cigarettes and what their children are breathing in — and out. According to Hendrickson, many parents believe their children are vaping water.

“Parents and educators need to be aware that teens are not only just vaping the popular liquids … but they’re also vaping THC and methamphetamines,” Hendrickson said.

Herman said all of the e-cigarettes he has confiscated at the high school have been used for tobacco. However, he suspects those cited for vaping or having vape products at school are a small portion of those using them.

Discipline data submitted to the Minnesota Department of Education showed Albert Lea High School reported 18 citations for tobacco policy violations in the 2016-17 school year. Herman said most of his tobacco citations now are due to e-cigarettes, but those numbers would be reflected in statistics from the 2017-18 school year, which the Department of Education has not yet released.

At the high school level, Grossklaus said the health curriculum was updated to include conversations about vaping for eighth- and 10th-graders, though the 10th-grade curriculum is not as in-depth. Additionally, Partners in Prevention set up a mock bedroom a few years ago with hidden devices and chemicals for parents to see where and what students may be hiding.

Further concerns for children include ease of access thanks to online purchasing. Right now, teens with access to a credit or debit card can go online and purchase tobacco by entering a birthdate, Howe said. Additionally, Hendrickson said during their time at the Freeborn County Fair, she was made aware that students in school are receiving devices thanks to distribution from older students.

The district edited its tobacco policy in November 2017 to include electronic cigarettes in its definitions of tobacco-related devices. Grossklaus said electronic delivery devices were still covered because the tobacco policy’s umbrella included anything involving nicotine. But all the time, there’s new substances for e-cigarettes, he said, and the policy change should address that.

But addressing this problem is up to more than the schools, Howe said. It’s a community effort. She asked parents and community devices to start educating themselves.

“I do think it’s got to get worse before it gets better, but now that it’s getting more national attention, I do think that helps our local efforts,” Hendrickson said. She expects the county will start to see a trend of reduced use in Freeborn County.

Grossklaus said while students may not have yet made the connection between e-cigarettes and the harm they cause, he expects that to change.

“The cigarette thing basically ended up being the students saying, ‘This is bad,’” he said. “Kids are, kids are pretty savvy about what’s healthy and what’s not, and I think as they gain more knowledge about the possible effects of these, I think kids will be like, ‘No.’”

But according to Herman, it may take a bit.

“I think this stuff is so new, it’s going to take some time to get the information out,” Herman said. 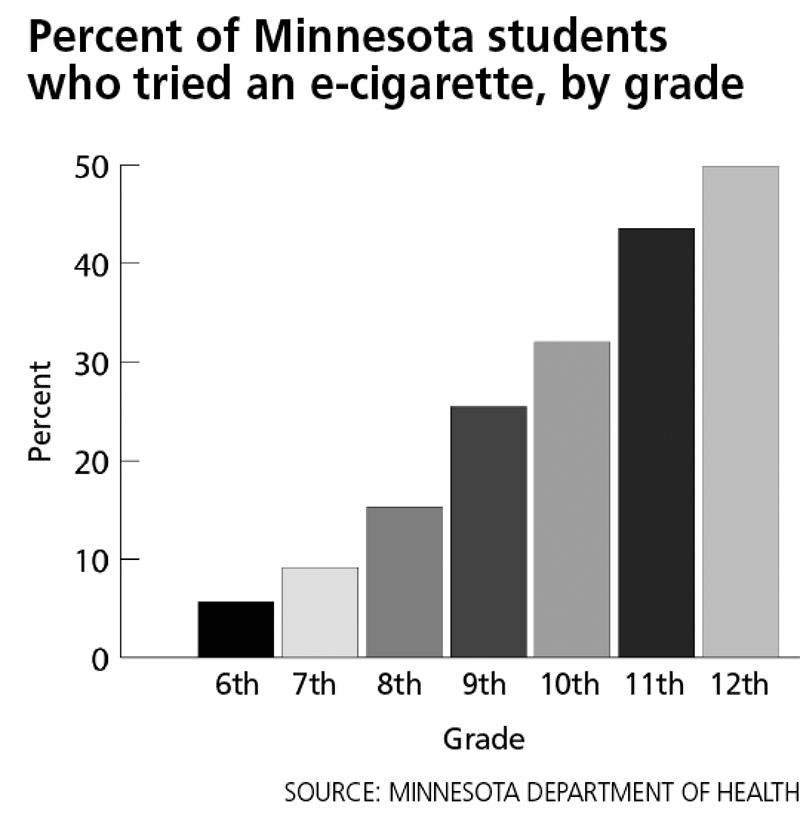