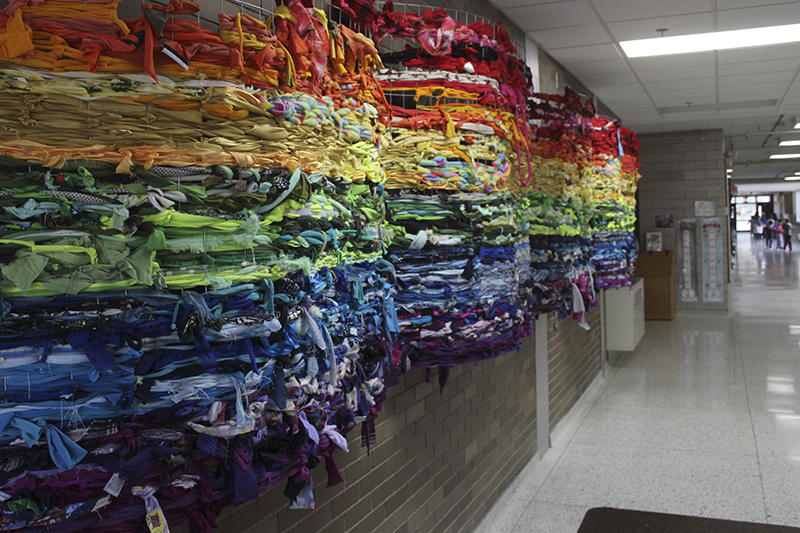 Students in all grades at Halverson Elementary School participated in creating the woven art installation that now adorns the front hallway near the school entrance. Sarah Kocher/Albert Lea Tribune

Old clothes are getting new life at Halverson Elementary School in the form of a student-made art installation gracing the front entrance.

“When you walk into a building, you should feel embraced,” Franks said.

Then there’s the size, too: the piece takes up a good chunk of the uninterrupted wall on the left when visitors walk into the school.

For kindergarten, first and second graders — as well as other students who chose to do so — their part included donating clothing, which was washed and cut into strips the third-, fourth- and fifth- graders wove into the sturdy wire fencing donated by Bomgaars. The piece follows rainbow order from top to bottom, with woven red strips transitioning into orange, yellow, green, blue and purple. 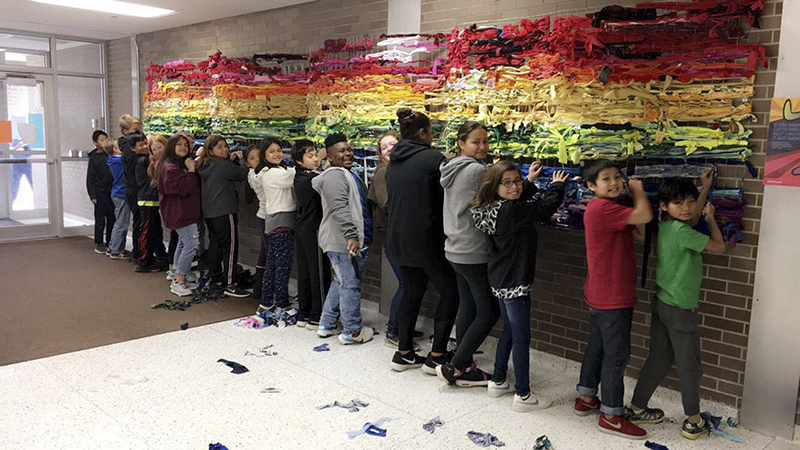 Bremer said her art class studied the cultural history of American Indian weaving as part of their lesson and learned weaving techniques themselves. Third-, fourth- and fifth-graders spent two full weeks weaving, a timeline Bremer said is not abnormal for an art project but on a scale bigger than many others.

However, clothing collection and preparing the materials for weaving was a project in and of itself, she said.

“I mean, it was hours of prep work just to get it ready to weave,” she said. According to Bremer, Halverson’s Minnesota Reading Corps volunteer did a lot of that work.

Bremer said she tries to do an all-school project every year after being first inspired by a tree created by Russian painter Wassily Kandinsky. This year, the students also created a pair of colorful wings out of paper feathers, each of which had to include art elements. The piece is a conversation on perseverance, Bremer said; it’s accompanied by the words, “Oh, but what if you fly?”

In past years, students created a Kandinsky-inspired tree as well as a Starry Night mosaic.

Those elements — line, space, value, form, texture, color and shape — are part of the conversation with every lesson. There’s a place for almost every element in the building’s newest installation as well, Bremer said.

“All of our kids got to touch this piece of artwork,” regardless of ability level, Franks said.

The building’s atmosphere and the artwork’s place in that was part of a conversation started by a Responsive Classroom building-wide audit. Responsive Classroom is an educational approach that emphasizes the relationship between social-emotional learning and academic success.

The permanence of the piece will be somewhat determined by construction as the district prepares to expand Halverson’s gym and move its front office as one piece of the $24.615 million referendum passed in May.

“That wall may or may not stay,” Bremer said.

During construction, the piece can be rolled up and moved.