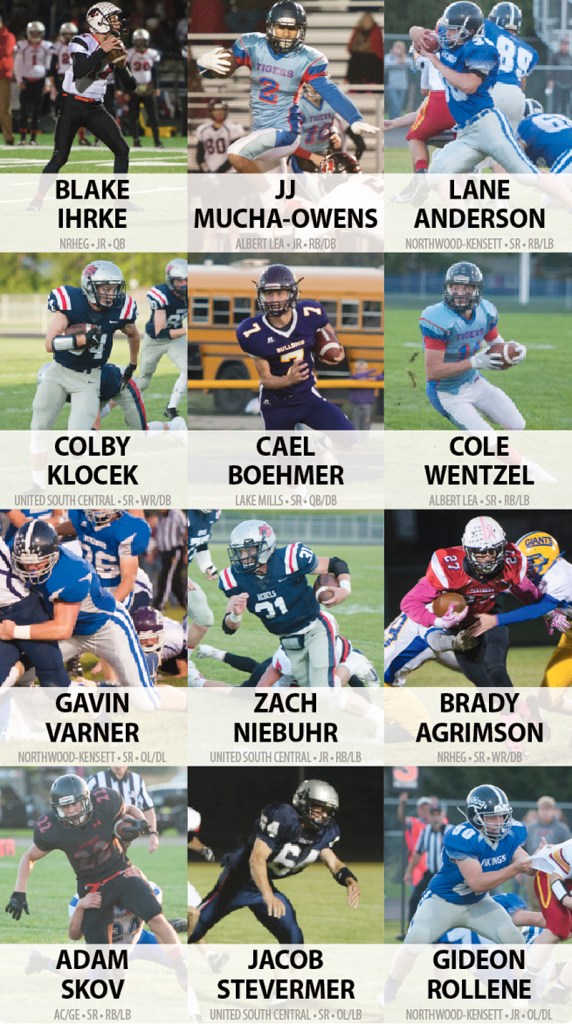 Ihrke led the Panthers by taking over the quarterback position in his junior year. He led the area in passing yards, throwing for nearly 1,700 yards and 24 touchdowns with 89 completions.

NRHEG finished its tremendous season with an appearance in the state quarterfinals and a record of 9-3. Ihrke will be a big part of the returning offensive core next season.

Mucha-Owens was the second-leading rusher in the area, finishing with a total of 1,357 yards. He also had 12 touchdowns and boasted a rushing average of 7.1 yards per carry. Mucha-Owens was also a force on the defense, pulling down two interceptions for the Tigers.

After winning their first game in over a year, the Tigers and Mucha Owens have sent the expectations for the future to a new high.

Anderson finished fourth in the area with 759 rushing yards, while also nearing the top of the list in rushing touchdowns with 13. He was also a two-year starter on defense at inside linebacker.

Anderson was a powerhouse for the Vikings offense, helping them reach the first round of the playoffs and finish with a record of 8-2.

Klocek was a key part of a highly potent Rebels offense in 2018. He finished the year with 586 receiving yards and six touchdowns, breaking the school record for receiving yards in the process. He also added another 291 yards and four touchdowns on the ground.

“A big play waiting to happen every time he touched the ball,” said head coach Brandon Neseth. “(He) improved more from his junior year to senior year than any player I have ever coached, (he’s) a joy to coach and a player that made our offense much more dynamic this season.”

Niebuhr led the area in both rushing yards and touchdowns with 1,648 yards and 27 touchdowns. He was another big piece of the success the Rebels had this year, going unbeaten until the quarterfinal round of the Class A state playoffs. He also had a touchdown on the defensive side of the ball, recovering a fumble and scoring.

“He is the most naturally gifted runner I have ever met,” Neseth said. “Combine that with the work ethic he has and the amount of time he has spent in the weight room, and you have seasons like he had this year.”

Wentzel was a presence on both sides of the ball for Albert Lea in 2018. He racked up 815 yards and 10 touchdowns on offense, while also recording 91 tackles, three sacks and two interceptions defensively.

Wentzel played a big role in the building process the Tigers have gone through during his time on the team. He will be missed as the team moves forward, trying to fill gaps in the leadership and playmaking capabilities that he leaves behind.

Varner was named the Defensive Player of the Year in the Vikings’ district, on top of being selected to the first-team All-District. From his position of nose tackle, Varner recorded 55 tackles — 21 of which were in the backfield and five were sacks.

Boehmer was a quarterback who got it done, both through the air and on his feet for the Bulldogs. He passed for 866 yards and four touchdowns, and ran for 372 yards and 11 touchdowns in his senior campaign, leading the district in scoring.

He also scored a touchdown on the defensive side of the ball on top of recording 26 tackles.

Agrimson led the area in receiving yards and was tied at the top for receiving touchdowns with 608 and eight, respectively, and that’s with missing the first four games of the season. His speed at the receiver position was unmatched and any defense the Panthers faced had its hands full lining up across from Agrimson.

Agrimson also had 38.5 tackles, one sack and two forced fumbles on the defensive side of the ball.

Skov was the third leading rusher in the district, running for a total of 736 yards in 2018. He found the endzone seven times and eight times on the point-after attempts. Defensively, head coach Chad Matson described him as a no-nonsense player and a linebacker who had a nose for the ball and was in on nearly every play. On top of playing both sides of the ball, Skoz was one of two kickoff returners for the Knights.

From his linebacker position, Stevermer notched 98 assisted tackles and 21 solo, while also recording three sacks and one interception. Neseth said Stevermer was a catalyst for the team as it led the district in rushing with over 3,100 yards. According to Neseth, Stevermer was a three-year starter and will go down as one of the best players to ever play for the school.

The Northwood-Kensett defense is set to be great again with the return of Rollene on the line.

Wagner led the Bulldogs in rushing with 549 rushing yards, finding the endzone twice throughout the season. He also had 56 assisted tackles, 36 solo and two fumble recoveries.

Meyer cracked the 1,000 passing yards mark in his junior year with 1,086. He threw for seven touchdowns, while also gaining 505 yards and six more touchdowns on the ground. Defensively he had 31 assisted tackles and 13 solo tackles.

Wilson caught 22 passes in 2018, totaling 584 yards and seven touchdowns. He added two touchdowns from his cornerback position, on top of four interceptions, four forced fumbles and one fumble recovery.

Nichols led the Vikings with 104 tackles from the defensive line. He also had 20 tackles for loss and 12 sacks in only his freshman year.

Dahlum reeled in 34 catches this season for 485 yards and eight total touchdowns. He was fourth in the district in scoring and averaged 20.5 yards on kick returns for the Knights.

Attig was the anchor for both the offensive and defensive lines. He was an All-Conference player for the Knights with two fumble recoveries and two sacks.

Johnston had 61 tackles, 19 tackles for loss, five sacks and one forced fumble on the season.

On the defensive side of the ball, Kliment had 65 tackles and two interceptions. He also rushed for 212 yards for the Northwood-kensett offense.

Schmitt notched 90 tackles on the season, while also recording a pick-six and three fumble recoveries.

Bias made 45 PAT’s this season, shattering the school record of 27. Neseth credited him with being one of the most intelligent players he has ever coached.

Jacobson rushed for 386 yards and four touchdowns, while also leading the Panthers with 84.5 tackles and seven sacks.