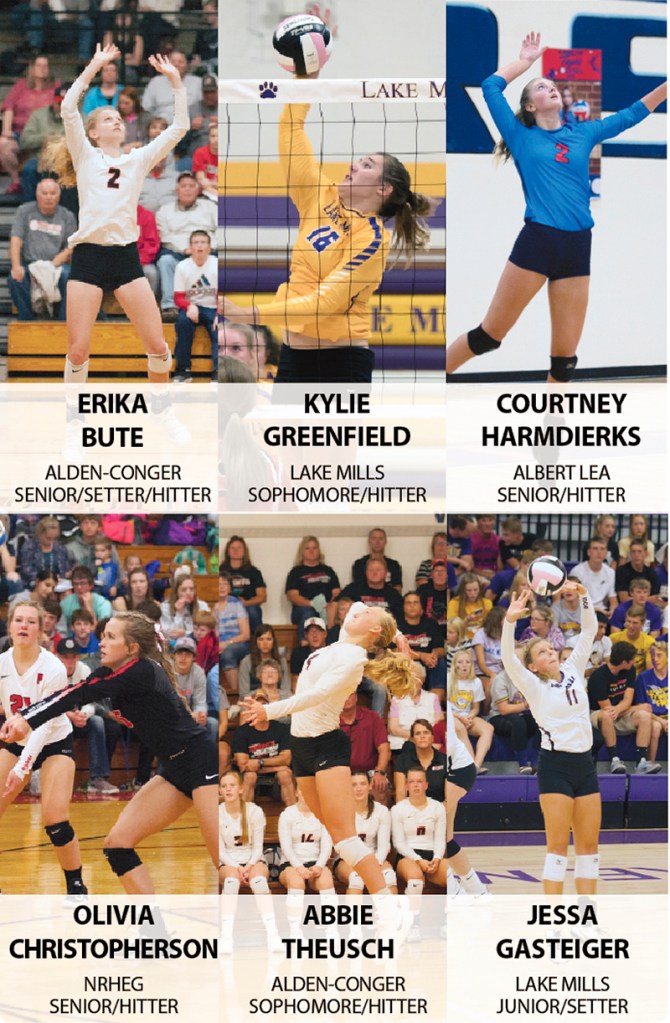 Bute finished her senior year near the top of almost every statistical category on her team and in the area. Her 213 kills ranked fifth in the coverage area, 287 digs was second and 599 assists was also second. She boasted a 98.6 percent success rate from the service line and was a huge catalyst to the success of the Knights team finishing 23-4-1.

One of two sophomores to make the first team, Greenfield will be a force for the Bulldogs for years to come. She was first on her team and second in the area with 317 kills. She also totaled 182 digs, 60 aces, 21 assists and 20 blocks throughout the season.

Lake Mills head coach Jim Boehmer said Greenfield’s best asset was her aggressive approach to the game and energy that she provided to the rest of the team. The Bulldogs finished the season at 31-9 in the regional semifinals, and with Greenfield on the team, their traditional dominance looks to be in good shape.

Harmdierks was a bright spot on the Tigers team that was unable to get a lot of momentum to fall in their favor. She led the team in kills with 108, while also notching 112 digs, eight blocks and seven aces.

Her persistence and never- quit attitude provided a good blueprint for her younger teammates to follow. The leadership she brought to the court will be missed as the Tigers hope to build the program in the coming years.

Christopherson led the Panthers in kills and digs with 272 and 215, respectively, and was third in the area in kills. She also totaled 28 ace blocks, 11 ace serves and five assists throughout the season. As a three-year starter and two-year captain, she was a leader on and off the court according to head coach Onika Peterson.

“Olivia stepped in and played a huge role on our team the last two years,” Peterson said. “She was someone we looked to when we needed to get a kill to win a point in a rally. We looked to her for her leadership and her skill on the floor.”

As just a sophomore ,Theusch led the area in total kills with 342, while also totaling 55 digs, 28 blocks, 24 aces and four assists on the season. On top of helping the Knights reach the subsection finals, Theusch was named to the first team All-Valley Conference team. She also earned high praise from her head coach Jolene Bute.

“Abbie is becoming an outstanding player,” Bute said. “She has a very powerful swing and plays a solid back row. She could become one of the best hitters to go through Alden-Conger.”

Gasteiger was a major force, setting her teammates up for kills leading the area with 710 assists, over 100 more than the second-place finisher. She also totaled 159 digs, 114 ace serves, 77 kills and 15 blocks. Gasteiger is set up to be a big piece of the Bulldogs’ success next season.

“What added to her game was her ability to play defense,” Boehmer said. “She was third on our team for digs (159) which demonstrates how aggressive she was on the floor. Jessa may also be the best server in the state, when you consider her aces serves per set.”

Baird had a fantastic year, finishing in the top five in both kills and digs with 229 and 239, respectively. She also served 53 aces, had 18 blocks and five assists.

Cordle led the Vikings with 101 kills on the season and a serving percentage of 94. Cordle also led the area with 96 blocks, while totaling 50 digs, nine aces and one assist.

Van Riper notched 183 digs, 73 kills, 20 ace serves and five blocks on the season for the Tigers.

Hanson totaled 200 kills, 91 digs, 47 ace serves, 29 blocks and 23 assists during her senior season for the Bulldogs.