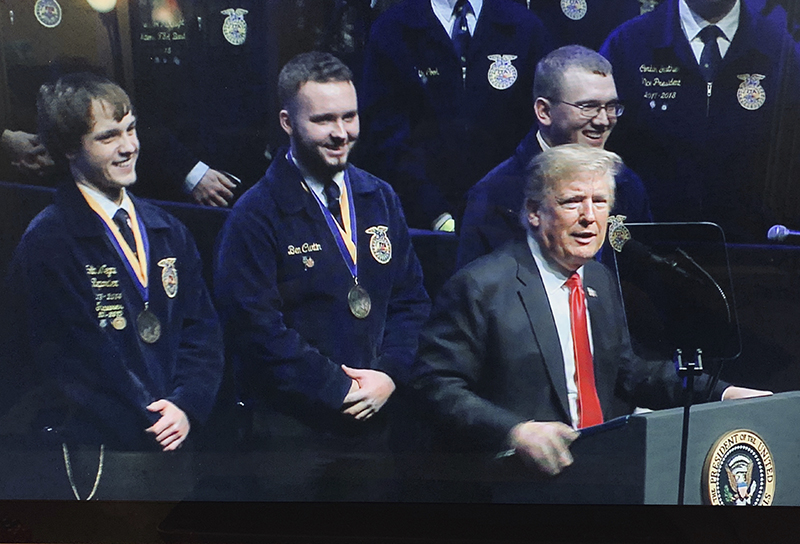 On Oct. 25, Colin Wegner of Wells was announced as the winner of the American Degree Star Placement Award. Wegner was on stage with three other finalists from Georgia, Tennessee and Iowa when his named was announced in front of a crowd of over 15,000 members in Bankers Life Fieldhouse at the National FFA Convention in Indianapolis, Indiana, according to a press release.

Wegner was accompanied on stage by his parents, Eric and Shannon Wegner and United South Central FFA Advisor Dan Dylla. Earlier in the day, Wegner was interviewed by a panel of ag industry professionals and ag teachers about his FFA project, which is working for Wegner Farms. He along with the other three Star Finalists also attended the American Star sponsors breakfast and luncheon and networked with industry professionals and educators.

The road to being named a Star Finalist began when Colin enrolled in his first agriculture class at USC as a ninth grader. His supervised agricultural experience project for his class was working on Wegner Farms doing basic corn, soybean and forage production. Throughout high school his project grew as did his responsibilities on the farm. After he graduated from United South Central, Wegner attended South Dakota State University in Brookings, South Dakota, and earned a degree in Agronomy in three years. Throughout college, Wegner continued to build his SAE project by working for Wegner Farms and interning at Nielson Agronomy Services. Upon graduating from SDSU this past May, Wegner returned to Wells and began working full time for Wegner Farms.

There are over 660,000 members nationally and less than 1 percent earn the degree, the release stated. In order to earn the degree FFA members must have in place and SAE project, earn and invest a minimum of $10,000 in their SAE, have a satisfactory scholastic record and be very involved in FFA leadership and career development activities.

Wegner was selected by the Minnesota FFA as its candidate in Agricultural Placement. His application was forwarded to the National FFA and judged and eventually selected as one of the top 4 from the United States. The top 4 candidates are then interviewed in Indianapolis and a winner is named. In addition to the National Award, Colin Wegner was invited to be a guest of President Donald Trump at the 9th General Session on Saturday. Colin received a phone call from the White House late Friday evening. Wegner was invited to come on stage along with two other Star winners to meet the president.

The President spoke specifically about each student and their FFA project and what town they were from.