Funeral services for William F. Angell, 95, of Albert Lea will take place at 11 a.m. Nov. 21 at Red Oak Grove Lutheran Church in rural Austin. The Rev. Lindsay Brennan will officiate. Interment will be in Red Oak Grove Lutheran Cemetery. Honor guard services will be provided by Blooming Prairie Servicemen’s Club. Visitation will be from 4 to 7 p.m. Nov. 20 at Bonnerup Funeral Service in Albert Lea and one hour prior to the service at the church Nov. 21. 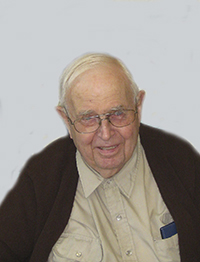 Bill served in the U.S. Navy on the USS Fred T. Berry in post-war Japan and China.

Bill was united in marriage to Ardis Jensen on Dec. 14, 1949, at Trinity Lutheran Church in Albert Lea. Following their marriage, they lived and farmed in Newry Township of Freeborn County near Blooming Prairie. When they retired from farming, they moved to Albert Lea. They wintered in Mesa, Arizona, for 28 years, where they enjoyed entertaining family and friends and playing golf. Bill and Ardis enjoyed traveling throughout the United States, including Alaska and Hawaii. They also visited family in England and Canada and enjoyed touring those countries.

He was a member of the Blooming Prairie American Legion, the Minnesota Crop Improvement Association and Red Oak Grove Lutheran Church.

The family wishes to express their appreciation for the tender loving care Bill received from the staff at Thorne Crest Senior Living Community and St. Croix Hospice.

Bill was a much-beloved father, brother, grandfather, neighbor and friend. He will be greatly missed.