Youth for Christ highlights influence on the community 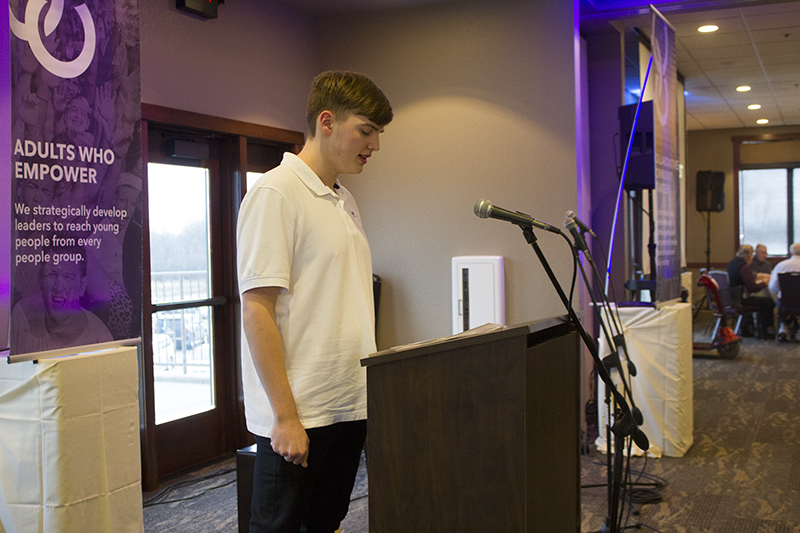 Fundraising numbers were discussed Thursday during the annual Youth for Christ fundraising banquet.

The organization had 152 children attend camps and trips, served 10,000 sandwiches or snacks and had 269 small groups, as well as 90 club meetings last school year.

During the event, Youth for Christ members discussed how Youth For Christ has influenced them.

High school student Rachael Holcomb discussed her past attempted suicide and habits of drinking and smoking. She said she has developed her faith in Jesus Christ and use of The Rock. She said she reads the Bible and wants to raise a Christian family.

Jakob Malakowsky said he learned of Jesus Christ during breakfast club events at Southwest Middle School. He discussed accepting Jesus Christ as his savior and being baptized this year.

Last fiscal year, South Central Minnesota Youth for Christ organized more than 100 children for work projects, such as cleaning ditches and working at Prairie River Camp, and worked with 30 youth who were doing community service with Court Services. More than 100 volunteers put in 6,300 hours to the organization, and 900 children attended a Youth for Christ program last year.

Program participant Margarita Lozano said she began attending The Rock as an elementary school student and discussed losing her faith in Jesus Christ after her sister died in 2017. She then started attending Vineyard Church with another person and The Rock following her sister’s death.

Eliyana Ortiz, 12, said being with other students who love God helps her develop her faith. She said she wants to be a surgeon when she grows up.

Cassie Nielsen said she attended Prairie River Camp and The Rock and has been confirmed in the faith.

South Central Minnesota Youth for Christ Executive Director Greg Gudal discussed some past experiences to illustrate the importance of children having faith in Jesus Christ and said having faith in the Lord is the answer to life questions.

He noted South Central Minnesota Youth for Christ has a $1.2 million budget and an endowment fund.

“We are all just stewards of all that God has entrusted with us,” Gudal said.

“Together, we can make a difference in the lives of children in our community,” he said.