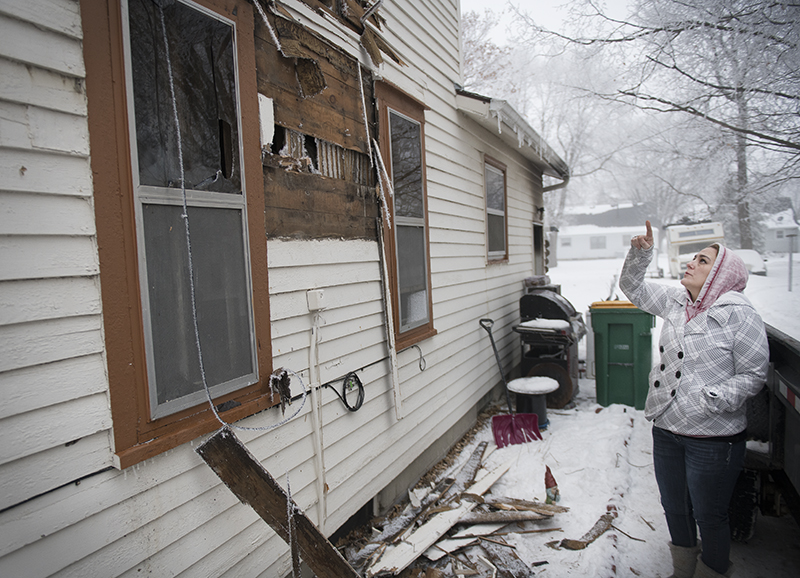 Anissa Carlson surveys damage done to the house she had been renting and living in, which was destroyed by a fire earlier this week. - Colleen Harrison/Albert Lea Tribune

NEW RICHLAND — When Albert Lean Carrie Boyer put a call out on Facebook Tuesday asking for items to give to an Albert Lea family whose home was destroyed by fire over the weekend, her former classmate Anissa Carlson was one of the first to respond.

Carlson, who now lives in New Richland, said she had planned to give the family towels, clothes and bath items.

Little did she know that later that night, a fire would break out in her own home, leaving her with only the clothes on her back and killing her two 8-month-old Chihuahua puppies.

“I was so excited because I was going to go the next day and bring them all this stuff, and then I woke to this,” she said as she looked out over the outside of the house Thursday morning for the first time since the fire.

Carlson, who lived in the rental home at 113 Third St. NW with George Torres, said she went to sleep around 11 p.m. Tuesday on the couch in the living room on the main floor — though she normally sleeps upstairs.

Before she went to sleep, she remembers blowing out the flame of a candle on the desk nearby, but noted it was still smoldering.

She woke up to an alarm — she said it was the second one to go off — after she dismissed the first one thinking it was her alarm to get up and go to work. 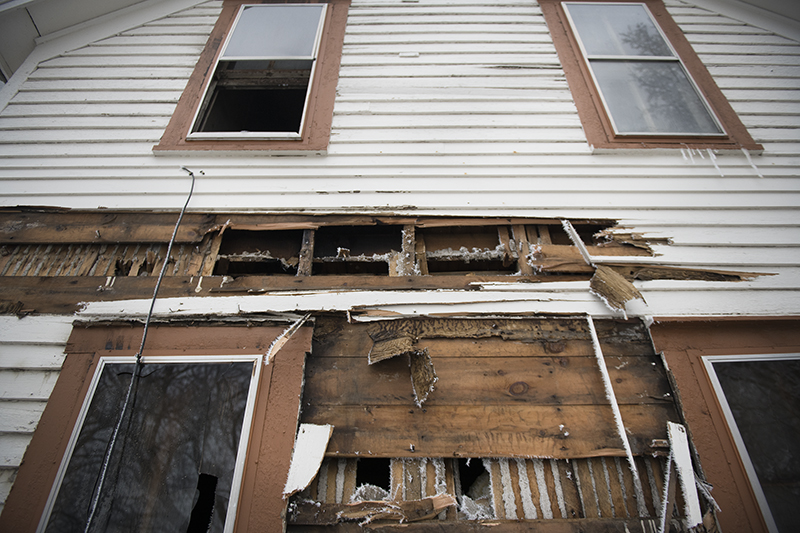 Carlson lost both of her dogs in the fire, and hasn’t found her pet birds, who she believes flew out of their open cage and escaped outside. – Colleen Harrison/Albert Lea Tribune

When she woke up, she said she looked over and saw fire on the desk in the room.

“I tried to fan it out, and it just got bigger,” Carlson said.

She ran upstairs to try to find Torres, who was not home and then tried to find her puppies, Mia and Baby, before running out of the house.

She said she ran back in about three times, finding her phone and glasses but never finding the dogs.

Her three birds, which lived in an open bird cage, escaped by flying out.

After she came out of the house the third time, at about 12:25 a.m., she said she called 911 and was outside of the home yelling for her puppies.

“I just keep hearing her bark,” Carlson said through tears about one of the dogs. “They’re like your best friends, and I couldn’t save them.”

“I don’t care about the stuff — it’s replaceable — but those aren’t,” she said.

When asked what people could do to help her and Torres recover from the loss, she replied, “Just love each other.”

She had an appointment Thursday to look at an apartment and has been working with the American Red Cross for emotional support in the aftermath of the fire.

Boyer, who has known Carlson her whole life, described her as “a sweetheart.”

“It was heart-wrenching because she was going to give (to the other family) and was one of the first to respond to me, and then this happens to her,” Boyer said.

People interested in helping Carlson can contact Boyer, manager at Motel 6 and the new Quality Inn & Suites and Econolodge, at 402-4251.

Officials with the New Richland Fire Department could not be reached as of press time for this story. 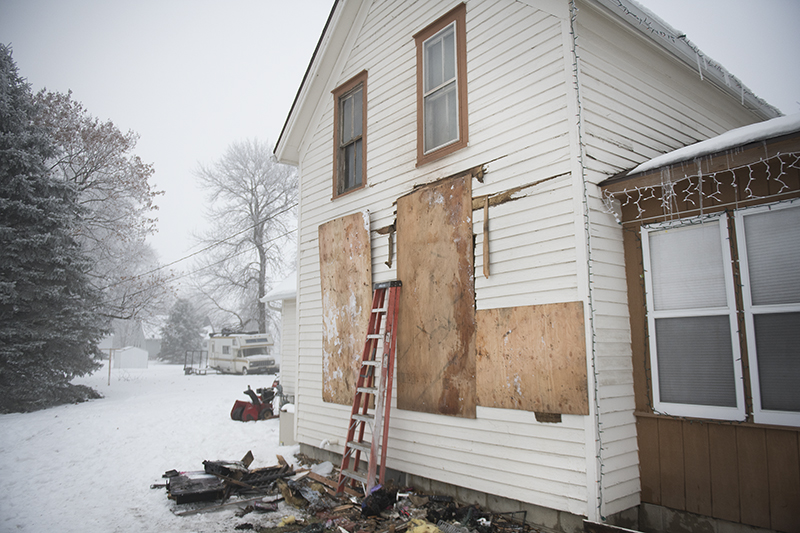 Boards now cover some damaged parts of the house at 113 Third St. NW in New Richland after it was damaged in a fire earlier this week. – Colleen Harrison/Albert Lea Tribune