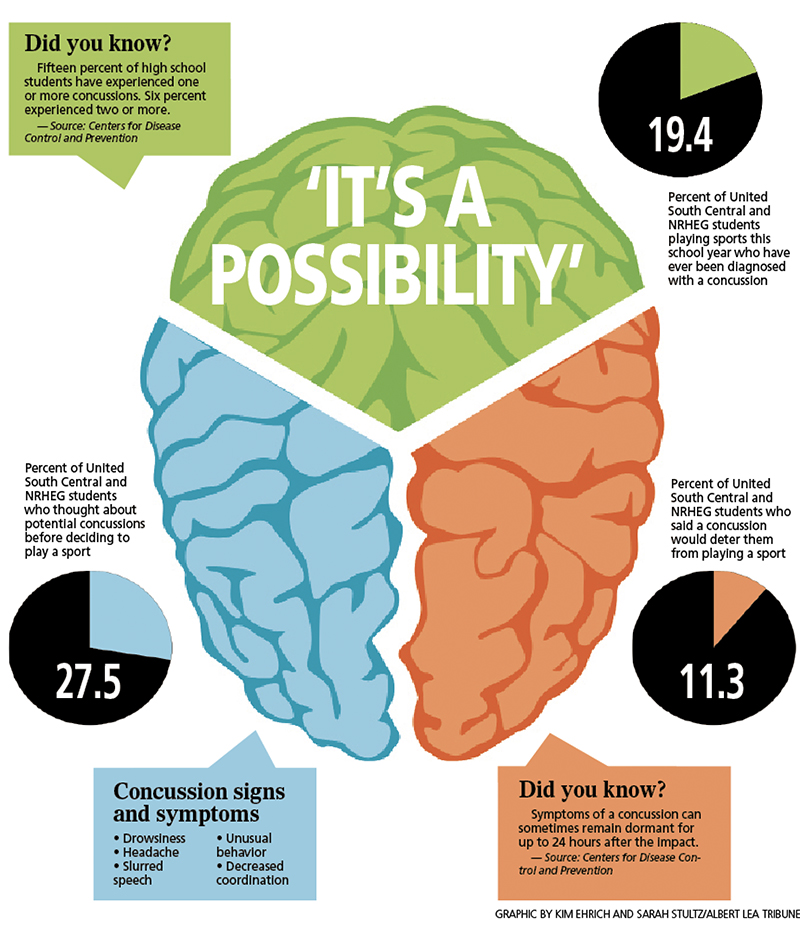 Editor’s note: This is the second of a three-part series about concussions.

In high school, the thought of a concussion may be a scary prospect for many student athletes. The stories hitting the mainstream about players who have experienced multiple concussions have the ability to sway students away from participating in sports.

However, a recent survey handed out to seventh- through 12th-graders at NRHEG and United South Central high schools revealed that only 27.5 percent of the 247 athletes who responded had thought about the potential for a concussion before they signed up to play, and even fewer said a personal experience with a concussion would keep them from playing in the future.

According to a 2018 study ran by the Center for Disease Control and Prevention, an estimated 15 percent of high school students experienced a concussion in the 2017 school year, while nearly 20 percent of the area athletes surveyed reported as having being diagnosed with a concussion during their athletic careers.

Kaylee Wachlin, a sophomore at Alden-Conger High School, was diagnosed with a concussion after receiving a hit to the head during a basketball game Dec. 4. Wachlin said she doesn’t remember much of the incident, but has been told what happened by the people who saw it.

“I can’t really remember anything,” Wachlin said. “All I can remember is the hit. I can’t remember what I was doing or anything like that. … The first thing I remember after the hit was holding my nose and I saw blood all over, which made me even more scared. I went to the bench and I could hear Emily (Stadheim, Alden-Conger’s certified athletic trainer), but I couldn’t really talk to her.”

Wachlin said before going out for basketball, concussions weren’t really something she thought about, especially happening to her. However, she had been exposed a little to the dangers of concussions because Stadheim requires each student athlete to complete an ImPACT test each year. The ImPACT test is a way to get a baseline score for a possible future concussion and provide some education on the subject.

“They are forced to think about it a little bit and realize it’s a possibility,” Stadheim said. “I think after the testing, a lot of them go back to thinking ‘Well that was a waste of my time, it won’t happen to me.’”

Alden-Conger head girls’ basketball coach Jenny Hovendick also said concussions are addressed in the paperwork athletes and parents are required to fill out at the beginning of the season.

Since the concussion, Wachlin has returned to practice in small forms, participating in some of the less strenuous portions of practice. She said for the first few days, any type of movement would bother her, and she was extremely sensitive to light.

“I slept a lot and stayed in the dark — no electronic devices,” Wachlin said. “I think I came back to school on the third day that I felt good, but then when I came here, I started to feel so much better.”

Wachlin’s mother, Amy Wachlin, said Kaylee wanted to get back into her regular routine as soon as she could, which is what Stadheim said can sometimes be a big help for someone recovering from a concussion.

Stadheim said some children will come back too soon and end up learning all the commotion of a school day can bring out the symptoms even more and draw out the recovery process even longer.

Of the 247 athlete responses in the Tribune’s survey, the majority at almost 90 percent said if they were to experience a concussion, it wouldn’t keep them from returning to the sport in the future. Wachlin said her thinking was no different. Despite the concussion, she said she has no doubts about returning to the game when she’s finished with her recovery.

“It doesn’t scare me from going out for sports,” Wachlin said. “But it was scary at the time. I was afraid of balls coming at me, I just didn’t know what was going on and what was going to happen next, but no, I’m not afraid to keep playing.”

What’s next: Part three of the series will look deeper into the recovery process and how much it can vary from one athlete to another.