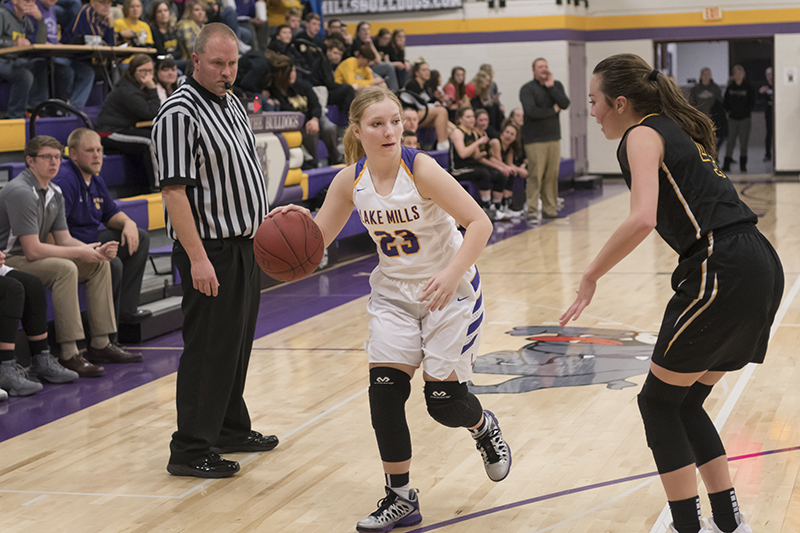 Lake Mills senior Kristyn Throne dribbles around a defender Tuesday night at home. The Bulldogs would lose to the Golden Bears 48-42 and fall to 1-3 on the season. - Lory Groe/For the Albert Lea Tribune

The Lake Mills boys’ and girls’ basketball teams hosted Bishop Garrigan on Tuesday night, with both teams looking to continue their success from the previous games.

On the girls’ side, the Bulldogs mounted a late-game comeback that fell just short in the end, as they fell to the Golden Bears 48-42.

It was a game of turnovers for Lake Mills in the first quarter, but despite giving the ball up multiple times, the Lake Mills defense held strong as it was a fairly even score heading into the second quarter.

Unfortunately for the Bulldogs, their turnover struggles continued into the second quarter and allowed the Golden Bears to climb to a 12-point lead as the teams headed to the locker rooms at halftime.

The Bulldogs roared back into the game late in the third quarter to tie the game back up. However, they were never able to claim the lead, as the Golden Bears knocked down a couple of free throws to seal the game in the end.

“I knew that if we took care of the ball and started attacking the rim, we could get ourselves back into the game, and we did just that,” said head coach Garrett Patterson. “Late in the third quarter we tied the game up. We couldn’t take the lead, and were down four late. Needing to foul to get the ball back, Bishop Garrigan sealed the game by making their free throws down the stretch. We played our best ball of the season at times, we just need to string four quarters together.”

Lake Mills was led in scoring by junior Jessa Gasteiger with 17 points; junior Kate Groe was second with 10 points.

The Bulldogs fall to 1-3 on the season and will be back on the court Monday when they host the Panthers of Central Springs. 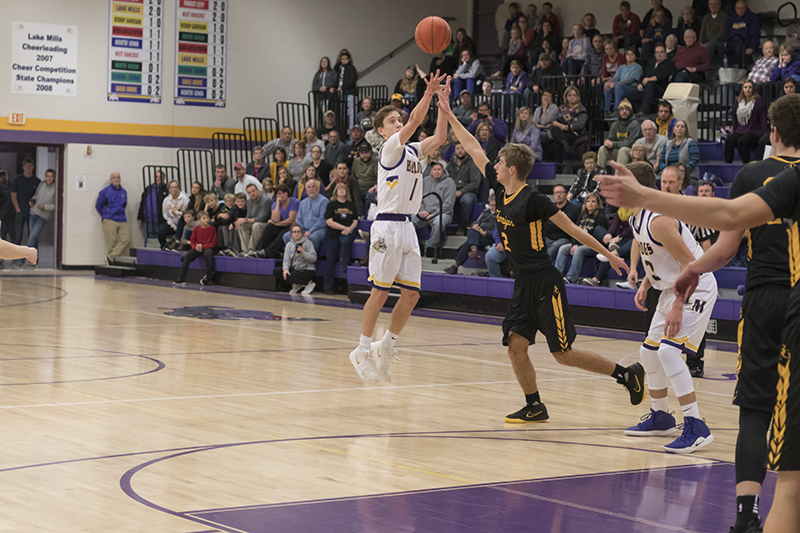 Colby Groe takes a shot from beyond the arc Tuesday against Bishop-Garrigan. The Bulldogs went on to lose to the Golden Bears despite leading by 12 at halftime. – Lory Groe/For the Albert Lea Tribune

In the boys’ game, the Bulldogs held the lead for a majority of the time, but were unable to hold on down the stretch, losing 64-52.

At halftime, Lake Mills had a comfortable 12-point lead over Bishop-Garrigan and was still leading by eight heading into the fourth quarter.

However, the Golden Bears would go on a tear in the final quarter, outscoring the Bulldogs 31-11 to turn the table and win the game.

The Bulldogs were led in scoring by junior Chett Helming with 21 points; junior Colby Groe had nine and sophomore Caleb Bacon had eight.

The Bulldogs drop their first game of the season and fall to 2-1. They will also be back in action Monday when they host Central Springs.