Funeral services for Carlyle N. Matheson of Albert Lea will be at 10 a.m. Saturday at Grace Lutheran Church in Albert Lea. The Rev. Shane Koepke will officiate. Visitation will be from 5 to 7 p.m. Friday at Bonnerup Funeral Service. Interment will be at Graceland Cemetery. Military honors will be accorded by Albert Lea area veterans groups. 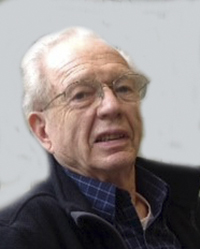 Carlyle was born Dec. 6, 1927, in Winnebago County near Rake, Iowa, the oldest of Selmer and Genevieve (Halvorson) Matheson’s eight children. He graduated from Rake High School in 1945. On Sept. 10, 1950, he was united in marriage to Dona Marie Loge in Frost, who was the oldest daughter of Herman and Florence Loge of Frost. After their marriage, he underwent basic training at Fort Knox, Kentucky, and served in the U.S. Army as a radio repairman in the Korean War. Upon returning, they made their home in Albert Lea, where he was employed for over 37 years at Church Offset Printing Co. as a pressman. Carlyle was an active member of Grace Lutheran Church, Albert Lea American Legion and the Y’s Men’s Club.

Carlyle enjoyed organic vegetable gardening, flower gardening, golf, traveling, hunting and working his trap line. He loved fishing and the many trips to northern Minnesota with his family. He was a quiet man with a gentle spirit and quick wit. Carlyle had a strong work ethic that started at a young age by helping his father work on the family farm using horses and eventually tractors. His wife and family were the most important parts of his life. Dona’s devoted companionship allowed him to live at home for many years, despite the onset of dementia.