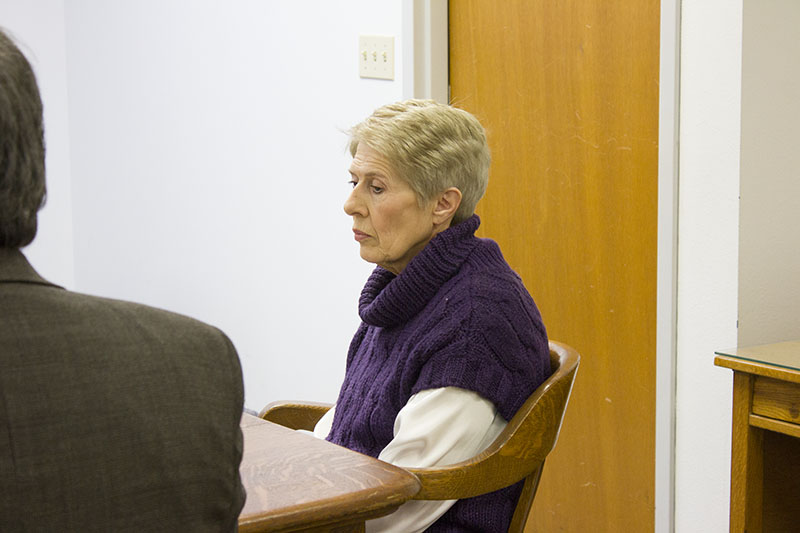 White Fire Kennels Owner Barb Kavars sits before testifying Tuesday during the second day of a civil trial as she seeks to have nine dogs and four cats returned to her. - Sam Wilmes/Albert Lea Tribune

The owner of the Manly, Iowa, commercial dog breeding facility where 154 Samoyed dogs were rescued last month pledged to not breed her dogs if they return to her property Tuesday during testimony.

The approximately three-hour testimony by White Fire Kennels owner Barb Kavars came on the second and final day of the civil trial against her in Worth County District Court.

Judge Douglas Krull ruled Kavars will be allowed to see the 13 animals before they are moved to an area outside the county.

The dogs are being kept in an undisclosed area in Worth County. If the Sheriff’s Office is unable to renew the lease where the dogs are at, Krull ordered the dogs can be moved to another in-state facility that is American Society for the Prevention of Cruelty to Animals-secure or a partner agency.

In arguing for Kavars to get the cats back, her lawyer, Michael G. Byrne, noted she has taken care of more than 150 dogs for more than two years.

Kavars agreed, adding she does not plan to continue breeding dogs. She said she doesn’t know which dogs she would spay or neuter.

“I would have much more time for them,” she said, adding she believes the animals were in good health before they were rescued.

She pledged to groom them well if they are returned. Authorities have said dogs had severe matting.

“I’m very eager to get them back and get them groomed the way they should be,” Kavars said.

She said approximately a half dozen dogs have been spayed or neutered over the last few years, and males have not been kept separate from females, with the sexes only being separated when open spaces were available for females.

Kavars, 65, has operated the facility for about 20 years. A part-time worker until December 2010, she assumed full-time duties after being laid off from her off-site job.

Kavars said she and her husband bought their first dog in 1982.

After the death of their pet, the family bought a female dog in May 1998 and a male dog in August of that year. Their first litter was born in October 1999.

A 2013 U.S. Department of Agriculture inspection found she had 43 dogs and expressed concern over holes dogs had dug.

The number of dogs at White Fire Kennels has increased in the five years since. According to a July 31 inspection, Kavars had 87 adult dogs and 84 puppies at the facility. She said she worked to downsize the facility, which she noted includes 19 outdoor kennels for adult dogs and 13 for puppies.

Kavars said some of her Samoyeds have been placed with the Humane Society of North Iowa in Mason City. She estimated 78 had been placed as of June, and she has sold 70 dogs and puppies.

Kavars said all dogs she has raised have been licensed. To Kavars, the process has been difficult, and she expressed nervousness.

She said she received help from her husband at White Fire Kennels, but that assistance lessened in January 2014 when he was diagnosed with a cancerous brain tumor.

“I suddenly realized I would be doing everything myself,” Kavars said.

She said she and her children called shelters and rescues to try to remove some of the dogs, but she added they would not take dogs from breeders.

Kavars said her husband’s health temporarily improved in 2015, allowing him to help more.

“We both worked together when we were there,” she said.

She acknowledged she has groomed the Samoyeds less since her husband died because she has had less time to do so.

Kavars refuted testimony by Worth County Sheriff’s Office Deputy Andy Grunhovd Monday that she told him the Samoyeds didn’t get water every day in the winter because they would eat snow and ice instead.

“They had sufficient water,” she said. “It wasn’t always a full bucket.”

She said she places water for the dogs every day, and sometimes more when water bowls freeze.

Kavars expressed concern that cleaning in cold weather would cause water to pool and freeze, something she said could be harmful for dogs.

She said she is unaware of the Purina scale used by authorities to evaluate neglect and animal body weight.

Kavars said she tried to feed underfed dogs she found.

She described the day of the search warrant, stating she had not yet put water out for the dogs when authorities arrived at 7 a.m. Nov. 12. She said she was in a car with authorities until about 5 p.m. and was given the chance to identify which dogs she wanted to keep.

She said the relinquishment agreement for her to keep nine dogs and four cats was hurried by ASPCA investigator Kyle Held.

“He was very rushed about it,” Kavars said.

“I felt pressured that he wouldn’t let me keep them.”

ASPCA forensic veterinarian Elizabeth Pearlman testified Monday that a dog who was inside the home at the time of the search warrant was taken to a veterinary facility because he could not rise, was blind, soaked in urine, dehydrated and had an ammonia odor. She said the dog was approximately 6 feet from drinking water when he was found.

The dog was diagnosed with having a heart-based tumor and was “humanely euthanized,” Pearlman said.

Kavars said the 11-year-old dog had mobility problems and had difficulty getting up that day, adding the dog was soaked in urine because he was not able to get up.

Kavars, who said she helped him walk, added she assessed his condition and looked at getting him to a veterinarian.

She acknowledged that because of the attention her outside dogs needed, she was not able to devote her focus to her indoor dogs, adding the ammonia smell noted by authorities stemmed from her not being able to clean for a few days.

Kavars said she has adequate shelter for the nine Samoyeds — three inside and six outside — and four indoor cats.

Kavars said the nails wear down naturally from playing outside.

Of a pregnant, underweight dog, Kavars said, “she’s a smaller dog. She’s always been more thin than some of my dogs.”

Kavars, who said she was unaware the dog was pregnant, added she still wanted the dog back, noting her facility can sufficiently take care of a litter.

Kavars said she has not observed animals in pain from chronic conditions and played down reports of feces on the rears of dogs, something Pearlman said could lead to intestinal parasites.

“They can easily have some on there,” Kavars said.

When asked by Kelsey Beenken, who is representing Worth County, whether she realized there were two emaciated dogs on her property, she said she did not notice them during checks.

Krull has not issued a ruling in the case. Beenken is expected to file a case brief by Monday, with Byrne responding by Dec. 12. Beenken can then file a brief in response by Dec. 14.