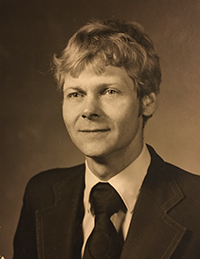 David was fascinated by the mechanics of anything with moving parts, and a brilliant self-taught artist. He took this interest and this skill and turned it into a career. He moved his family to Newton, Kansas, and started as a technical illustrator with Hesston Corporation. A few years later, he moved back to Albert Lea and started his own technical illustrating business, Throlson & Associates.

Scotsman’s Ice Machines was his first technical illustrating client. His business grew to nearly 20 employees — including all three of his children — when expanding his services to also include technical writing; proofing and editing and publishing for parts manuals; installation manuals, engine overhaul manuals and operator manuals; and handling clients such as Thermo King Corp., Walker Mowers, Edwards Manufacturing, Olson Manufacturing, APV Crepaco and more. He was always willing to teach his knowledge and skill to anyone who was willing to learn. The business still operates today and is now owned and operated by nephew Chris Skogheim.

David had an incredible passion for old classic cars, and had a 1935 Ford and a Model T — both in mint original condition. He was in his glory polishing those vehicles and driving them around town. In 2003 he traveled with son, Donald, to the 100-year Ford Convention and his Model T Ford was chosen amongst all of those old Fords to be displayed as the featured vehicle at the convention. He got to personally meet and shake hands with the great-great-grandson of Henry Ford. This was an incredibly honorable experience for him.

David was reunited with his father in our Father’s arms Thursday, Dec. 6, 2018, and will be missed by his family and friends.

He was preceded in death by his father, Donald Throlson; grandparents Art and Ruby Throlson and Henry and Anna Boyd; and granddaughter, Madison Rahn.

A celebration of life will take place in January. Details are pending.