Three times a year, the Tribune publishes a Sports Yearbook, highlighting all of the area sports teams as they begin their new seasons. 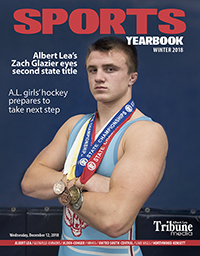 The winter edition of the yearbook is included in today’s issue of the Tribune and features Albert Lea High School senior Zach Glazier, a four-time state qualifier and reigning state champ, who is setting out to win another championship.

Glazier, along with Albert Lea wrestlers Nic Cantu and Brady Nielsen, are ranked No. 2 in the state in their respective weight classes. Cantu should have gone to state last year, but was too sick to participate in the section tournament, keeping him from qualifying. Nielsen came up just short of going to state after wrestling with an injury in last year’s section tournament.

With these three leaders and other strong wrestlers, the team is off to a great start, and we look forward to seeing them make another run at qualifying as a team for state again.

In addition to the feature on Glazier and the Albert Lea wrestling team, other highlights of the yearbook are the United South Central boys’ basketball team, the first season of the combined girls’ basketball team for Glenville-Emmons and Alden-Conger, and — you name it — spotlights on more wrestling with promising wrestlers on the NRHEG, United South Central and Lake Mills teams.

Whether you enjoy watching wrestling, basketball, hockey, swimming or dance, we encourage you to get out and support the area teams. Cheer for them as they seek to improve on previous seasons, both as teams and as individuals.