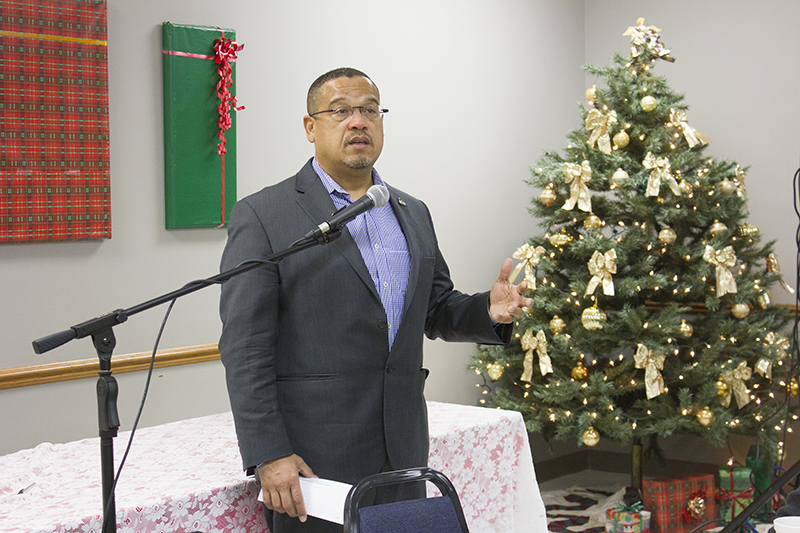 Ellison, a Democrat, touched on those topics during the 90-minute event attended by approximately a few dozen people that featured public comments and questions and his replies.

Ellison, the 5th District U.S. Rep. who defeated Republican Doug Wardlow for attorney general last month, said he is “really concerned about the people of Albert Lea” as the transition of most inpatient services to Austin unfolds because of the loss of services in the community.

Albert Lea Mayor Vern Rasmussen Jr. invited Ellison to visit with local stakeholders on the transition and predicted Albert Lea would not be the last city a similar transition would unfold.

Ellison said he is not sure of any remedies to the situation and did not make a commitment on any possible action.

He noted the state of Minnesota has helped Mayo Clinic and said corporate leaders who have benefitted from taxpayer money need to keep the public in mind.

He said he wants to protect senior citizens against fraud and pledged to have an open-door policy once his term begins next month.

Ellison, who has expressed support for legalizing marijuana, said a commission should review the experiences of other places that have legalized the drug.

“Let’s do it smart, wise, based on the experiences of other places,” he said.

To Ellison, trade and immigration are connected. He said large companies are able to cross international boundaries to make more money but immigrants who do the same sometimes cannot.

He spoke against President Donald Trump’s plan to build a wall at the Mexico-United States border.

He spoke in favor of a Congressional prison reform bill and called for Senate Majority Leader Mitch McConnell to bring it to a vote.

According to USA Today, the measure aims to reduce the number of inmates in the nation’s crowded prison system. As a result of the legislation, judges would be given more discretion in sentencing offenders for nonviolent crimes, particularly drug offenses, and strengthen rehabilitation programs for former prisoners.

“He spoke on a lot of the issues that everyone is concerned about in our community with the greater picture,” she said. “I feel that’s very important. I think it’s nice to see him be in touch with the smaller communities, not just the metro.”

To Goodemann, health care is a major local issue, and she said she appreciated Ellison for coming to the community and supporting prison reform for non-violent offenders.

After the meeting, Austin Public Schools psychologist Cassandra Schreiber said she believes the most important topics are education and mental health care funding.

“It was great that he showed up,” she said.

“It went well,” he said. “It was well-attended. People asked a lot of good questions. Folks clearly are passionate about their community. I was pleased to have the mayor here.”