From strangers to sales partners 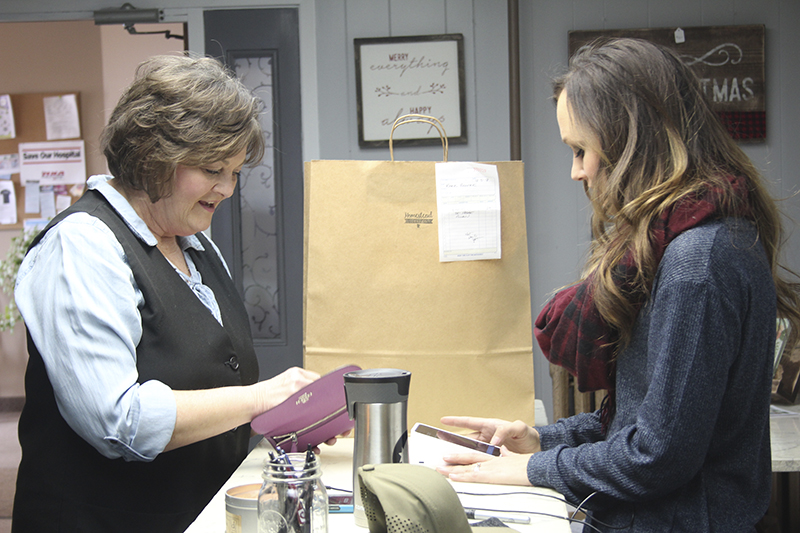 Shelby Trail helps a customer Wednesday morning in The Boutique at Dinah's Style. The boutique is a collaborative effort between four businesses. - Sarah Kocher/Albert Lea Tribune

Thanks to a call from a local salon owner, four businesses forged a new retail connection in time for the holiday shopping season.

Dinah’s Style owner Rachel Miller said The Boutique at Dinah’s Style, a collaborative space shared by Zyia Active, Camy Couture and Homestead Design, was an attempt to tap into a fun use for an unused space in her building. A boutique “just made sense,” in line with a trend Miler noticed in other salons.

Miller didn’t know Angela and Matt Moller of Homestead Design, Shelby Trail of Zyia Active or Kim Shea of Camy Couture — and they didn’t know each other — but looked at vendors during Wind Down Wednesday.

“(We) were strangers and we just met, and it’s been a great relationship so far,” Shea said. 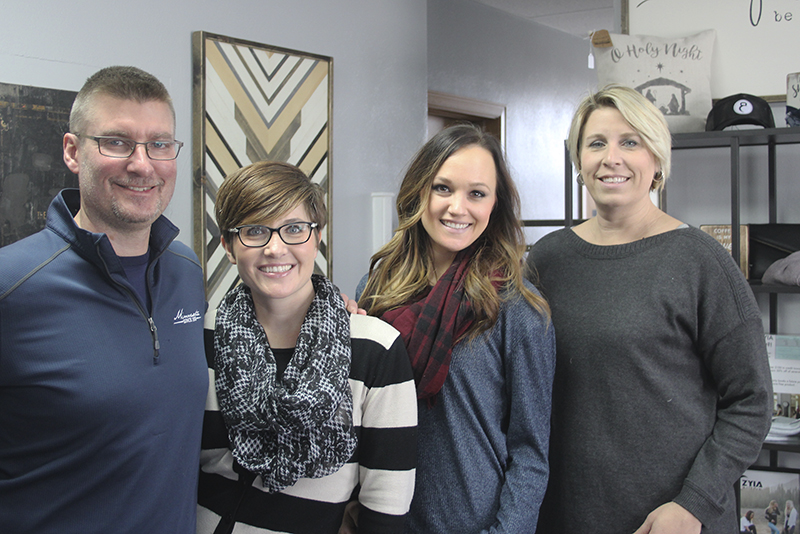 The three businesses split the space and staffing. The boutique is an amalgamation of their offerings. Homestead Design is responsible for much of the decor, as the couple creates hand-crafted and hand-painted geometrics and signs as well as custom orders. Camy Couture contributes clothing for women and girls as well as jewelry, while Zyia Active — a larger company for which Trail works as an independent representative — offerings focus on activewear, athleisure and loungewear.

“We don’t want it to look like a big box store,” Matt Moller said.

Working in the same space is an opportunity for customers who may come in with interest in one business to see the products offered by another, Angela Moller said. According to Trail, it also allows them to bounce ideas off each other.

Angela Moller said sharing the space has made a dream for their business’s future come true sooner than expected. Trail liked that she wouldn’t have to do it alone, and as a stay-at-home mom, she said she appreciates the interaction the physical location provides. Sharing the work hours also takes some of the time burden away, Shea said. 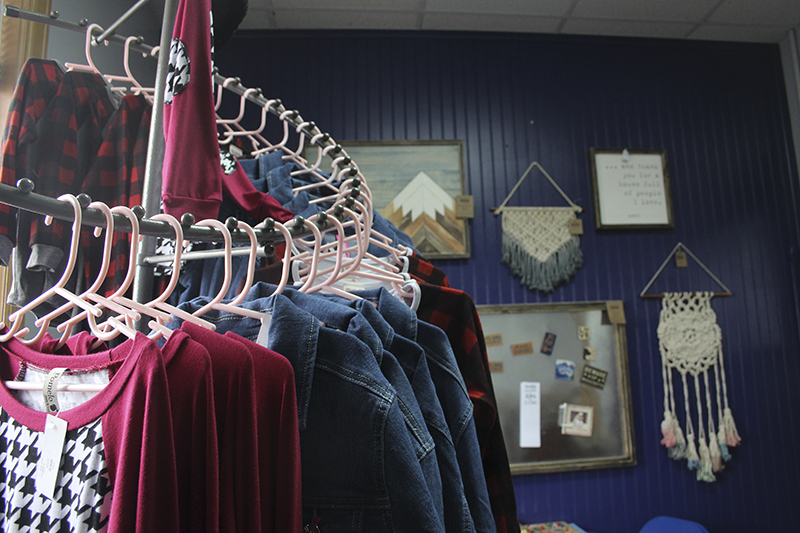 The boutique is open Wednesdays through Saturdays until Christmas, after which hours will be re-evaluated. – Sarah Kocher/Albert Lea Tribune

The Boutique at Dinah’s Style, which opened Nov. 24, is open Wednesdays through Saturdays until Christmas.

Preliminarily, the community response has been good.

“Everyone’s been saying it’s something that the town needs,” Shea said.

Matt Moller said people walking by are often curious about how the space is being used.

“(Salon customers) get mad on Mondays and Tuesdays when they can’t come in,” Miller said.

Whether The Boutique at Dinah’s Style stays around permanently is up to the community, Matt Moller said. 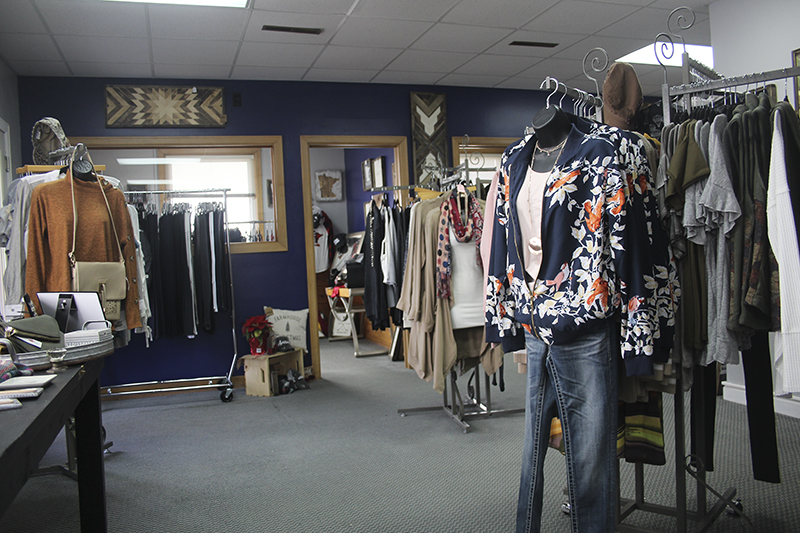 Offerings at the Boutique at Dinah’s Style include women’s and girl’s clothing from Camy Couture; activewear, athleisure and loungewear from Zyia Active; and handcrafted and hand-painted signs and geometrics from Homestead Design. – Sarah Kocher/Albert Lea Tribune

“We’re just kind of getting the feel of the community to see what kind of support we get and what their thoughts are on this boutique,” Shea said.

The lease is for three months, Shea said, but she is interested in continuing on.

“I would love if it just kept going,” Miller said.

The Boutique at Dinah’s Style is open from 10 a.m. to 6 p.m. Wednesdays, 10 a.m. to 7 p.m. Thursdays, 10 a.m. to 4 p.m. Fridays and 10 a.m. to 2 p.m. Saturdays through Christmas. Hours will be reevaluated after the holidays. Those who visit during the Holiday Bazaar on Thursday can register to win a gift basket of boutique merchandise. 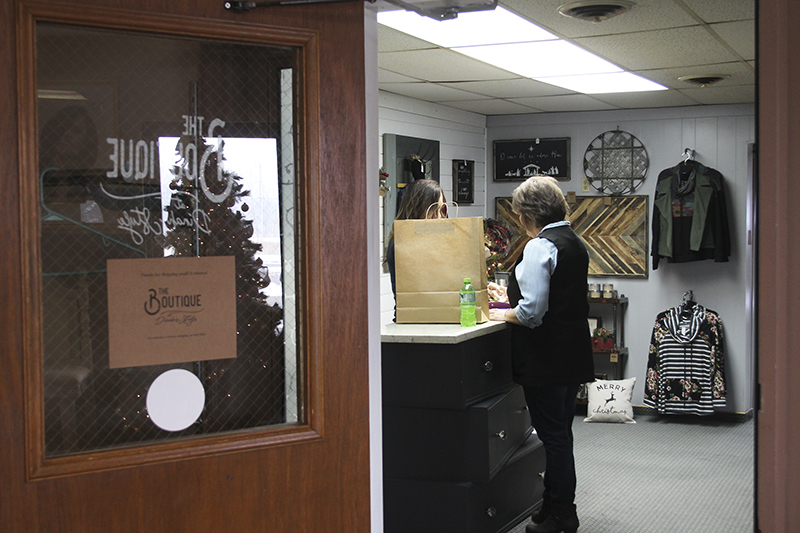