Guest Column: Public lands must be priority for Congress 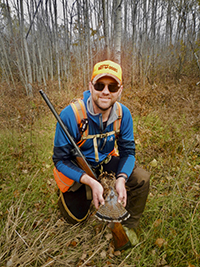 In the next Congress, Minnesota will send five new members of the U.S. House of Representatives to Washington, D.C., to represent various areas of the state.

Here in southern Minnesota, Congressman-elect Jim Hagedorn (R) will take over the seat currently held by Congressman Tim Walz (DFL), who will be our new governor.

We hope Hagedorn — as well as the other members of our eight-member House delegation — will make prioritizing our public lands and waters a priority. Unfortunately, the current Congress was not able to meet its obligation to do so.

On Sept. 30 of this year, the deadline passed for Congress to re-authorize the Land and Water Conservation Fund. For more than a half-century, the LWCF has provided funding to help protect some of Minnesota’s most special places and ensure recreational access for hunting, fishing and other outdoor activities. It has also provided funding for state and city parks, ball fields, trails, and conservation easements to protect fish, wildlife habitat and drinking water.

Hiking, hunting, fishing and other outdoor activities in and around public land and water is a way of life for Minnesotans. Without the proper funding to preserve these precious natural resources, our state will lose what makes us special and will put a key part of our economy in jeopardy.

Just like we put money toward the maintenance and improvement of our homes for livability, we must have the resources to make sure that our state’s natural resources remain healthy and vibrant for current and future generations.

We hope that with a new Congress, the new leadership will make LWCF re-authorization a priority. With Minnesota Congresswoman Betty McCollum — who has been a champion for conservation initiatives — set to become a key leader in Congress next year, we have reason for optimism.

Yet, this is not an issue that should be caught up in partisanship. All of us — Republican, Democrat or independent — benefit from our state’s beautiful natural resources.

On behalf of Minnesota Conservation Federation, I encourage our state’s congressional delegation on both sides of the aisle to make LWCF re-authorization a priority in 2019.

Jason Dinsmore is the executive director of the Minnesota Conservation Federation.