A Hartland man who allegedly led officers on a vehicle chase Friday was charged with a felony Monday in Freeborn County District Court. 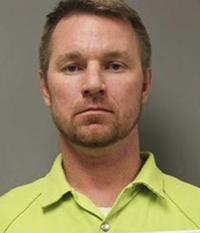 Court documents state Jacobson was charged after a Freeborn County Sheriff’s Office deputy tried to initiate a traffic stop on a vehicle traveling 78 mph in a 60 mph zone at approximately 11:41 p.m. Friday at the intersection of Minnesota Highway 13 and 325th Street north of Hartland.

The vehicle allegedly continued heading south on Highway 13 after the deputy activated her emergency lights and sirens.

Court documents state the vehicle stopped in front of Jacobson’s residence in Hartland, and he allegedly had trouble balancing and was walking side to side to get to the residence, not listening to deputy commands to stop.

Jacobson allegedly continued resisting arrest once inside the residence.

At least 15 empty Twisted Tea cans were inside the vehicle, court documents state.

While being booked, court documents state Jacobson said “something to the effect that he saw the deputy’s emergency lights when he turned into Hartland, but kept driving because he was almost home.”

He allegedly refused to take a breath test.

Jacobson entered provisional not guilty pleas to the charges Monday.

Judge Steven Schwab released Jacobson on his own recognizance, contingent on him not entering bars or liquor stores, not using alcohol or controlled substances, not possessing alcohol or drugs and following other court requirements.

A settlement conference is scheduled for Jan. 10, and a jury trial is expected to begin March 26 if the case has not been settled by then.