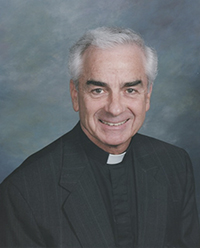 Jim began his schooling in Iowa, but when he 7, his father took a position as chief chemist for Potash Co. of America, a war-time industry, and the family moved to Carlsbad, New Mexico.

Jim began St. Olaf College in fall 1953. He graduated in 1958 with an economics major. During his senior year, he met and dated Rachel Almlie.

Following his wedding to Rachel on Aug. 3, 1958, in Lisbon, North Dakota, Jim began Luther Theological Seminary. He spent one year as an intern pastor at Our Savior’s Lutheran in Great Falls, Montana.

Jim was ordained in June 1962, and his first call was to First Lutheran Church of Circle, Montana. In Circle two children, Kristi and Karen, were born.

In 1966 Jim accepted a call to Trinity Lutheran of Carrington, North Dakota. Two more children, David and Susan, were born in Carrington.

In 1974 Jim accepted a call to First Lutheran of Albert Lea, a congregation of over 4,000 members, and he was one of four pastors on staff. A year later he became senior pastor. He was also active in service clubs, community theater, community choir and was chairman of the Freeborn County Freedom Fest.

In 1983 he accepted a call to First Lutheran of Miles City, Montana, where he ministered for four years. The family then moved to Seattle to accept a call from Bethel Lutheran of Shoreline, Washington. Jim was pastor at Bethel for almost 15 years before retiring in 2001.

Throughout his life, Jim was involved with music, theater and youth, and was active in biking, swimming, backpacking and hiking.

A month after retirement, Jim and Rachel had an auto accident which left him with quadriplegia. He continued to stay active in ministry, serving in two parishes as interim pastor and supply preaching in many churches throughout the synod. He became a beloved volunteer tutor at Parkwood Elementary School for the last 10 years.

Jim performed hundreds of weddings, including those of two of his daughters and his son. He also baptized four of his grandchildren, including one in Boiling River at Yellowstone National Park.

This past August, Jim and Rachel celebrated their 60th anniversary, bringing together a grand array of friends and family.

Jim was an extrovert, and he most enjoyed being with people, especially his family. He could never remember a book or movie plot, but if you asked him stories about the people he knew, he remembered them all in loving detail.

A memorial service will be Dec. 28 at First Lutheran of Richmond Beach in Shoreline.