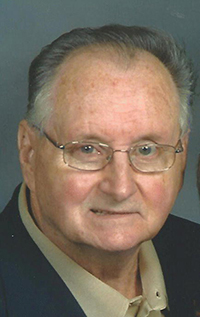 John was born July 15, 1937, in Timbo, Arkansas, the son of Roosevelt and Lena (George) Sutterfield.

He graduated from Avenal High School in California and enlisted in the U.S. Air Force in 1956. He served until his honorable discharge in 1960.

While on active duty at Lowry Air Force Base in Denver, John met LaVay Mueller, a secretary at Martin Aircraft Co. They were united in marriage on June 5, 1959, at First Presbyterian Church in Hayfield.

After his honorable discharge from the military, John worked in orthopedic appliances for a time and then retail. He eventually became a successful small business retail merchant in Albert Lea and then Litchfield for many years. He later sold his successful business and took a position as a regional sales representative for Durango Boot Co., traveling southern Minnesota, Iowa, North Dakota, South Dakota and Wisconsin while living in Sauk Rapids and St Cloud.

Over the years John enjoyed many fishing trips with his close friends Cliff Glembin, Dwayne Yahnke and Jerry Tierney.

He was preceded in death by his parents, one brother and one sister.

A funeral service will be 1 p.m. Tuesday at Czaplewski Family Funeral Home, 501 Second St. NW, Hayfield, MN 55940. Visitation will be one hour prior to the service at the funeral home. Interment will follow at Fairview Cemetery in Hayfield with full military honors conducted by Hayfield American Legion Post No. 330.