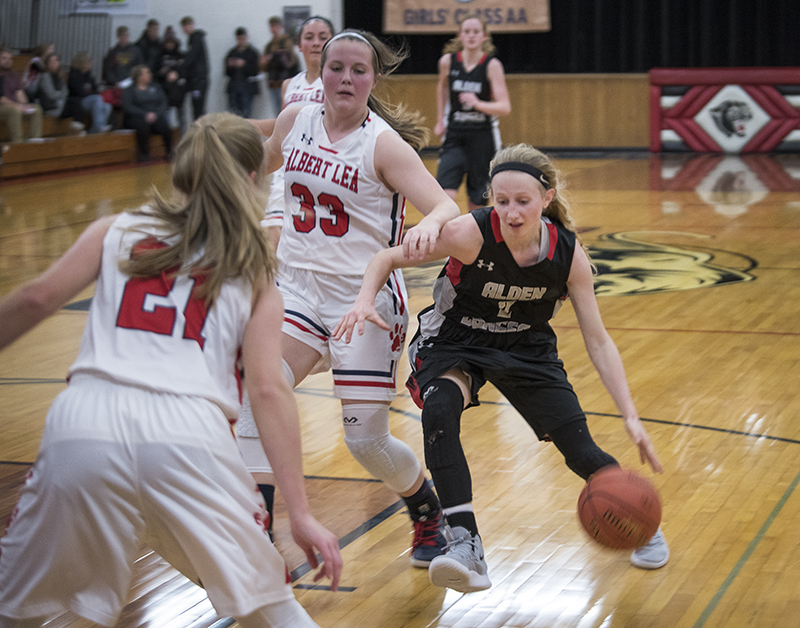 Alden-Conger/Glenville-Emmons' Erika Bute drives to the basket during the first half of Friday's victory over Albert Lea in the NRHEG holiday tournament. - Colleen Harrison/Albert Lea Tribune

The Knights and Tigers played tight through most of the first half, but the Knights pulled away to take a big halftime lead. The Tigers were unable to climb out of the hole in the second half, ultimately falling to the Knights 77-59.

AC/GE got on the board first with an offensive putback from senior Halee Miller. After falling to a 5-0 deficit, Albert Lea got on the board with a three-pointer from junior Samantha Skarstad.

From there, the Tigers went on a 14-6 run to take a nine-point lead. The run came mostly from Skarstad, who had 12 of the Tigers’ first 17 points. The Knights had trouble getting baskets to fall early, even when they were getting open.

Albert Lea started to struggle with ball handling after the opening surge, giving up the ball on multiple occasions on unforced turnovers. AC/GE found their rhythm midway through the half, leading Albert Lea to call a timeout with just under seven minutes remaining. Albert Lea still had a 19-15 lead.

With those seven minutes, the Knights led a big rally to end the half on a 24-7 run. Sophomore Abbie Theusch and senior Erika Bute were huge in the Knights’ effort. Theusch was able to drive to the basket with relative ease and pulled in a handful of rebounds. She ended the half with 12 points. Bute was fairly quiet from the field in the first half, but was most impactful from the free throw line. Nine of her 16 first half points were made at the charity stripe. 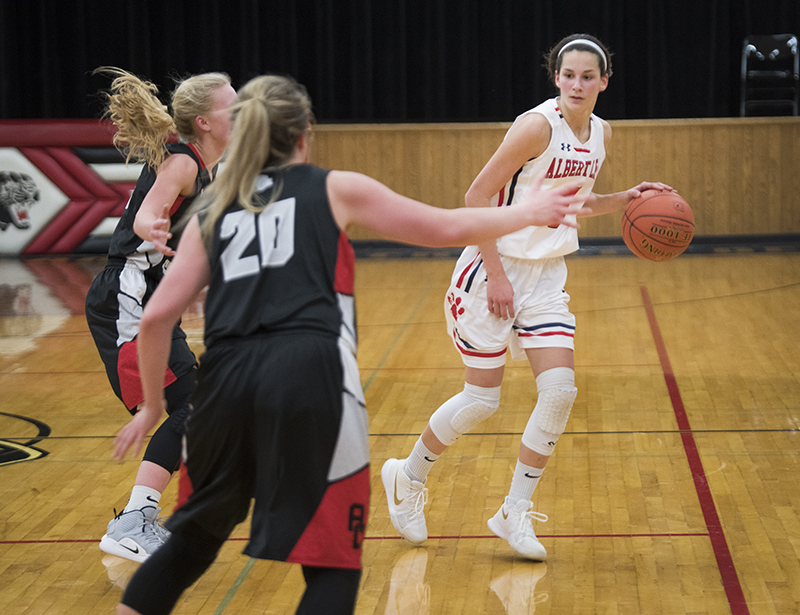 Albert Lea’s Taya Jeffrey was held scoreless in the first half, normally a big part of the scoring offense. Eighth-grader Kendall Kenis had a solid first half with eight points going into the break.

Heading to the locker rooms, the Knights led the Tigers 39-26.

The Tigers came out in the second half and momentarily cut the lead down to single digits, but the Knights would overtake the game, climbing out to a 24-point lead late.

Jeffrey came on in the second half with 11 points, but along with 16 from Kenis and Skarstad combined, it still wasn’t enough to bring the Tigers back.

The Knights were led in scoring by Bute with 29 points; Theusch had 18, senior Megan Linn had nine, junior Chloe Anderson and senior autumn Soost each finished with six, Miller had four, junior Sydney Rasmussen three and junior Kennedy Severtson had two.

The Tigers were led by Skarstad with 20 points, Kenis with 16 and Jeffrey with 11. Other scorers for the Tigers included freshman Annika Veldman with five, and freshman Jordan Juveland and sophomore Madi Fleek with two each.

The Knights move to 6-3 on the season and will play again Thursday, when they host the Rebels of United South Central.

The Tigers fall to 2-9 and will return to the court on Friday, hosting Mankato East.