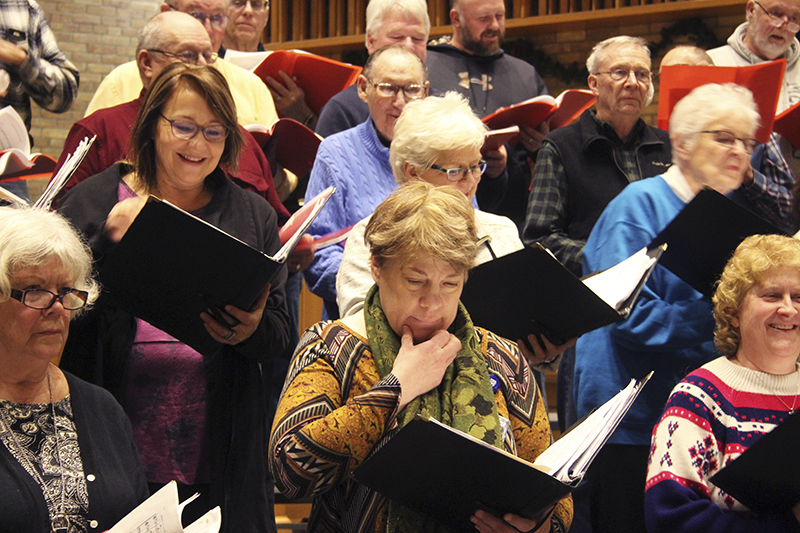 Faith Tones and Harmony Junction choir members prepare for the next piece during rehearsal Tuesday night. This will be the third year of their combined Christmas concert. Sarah Kocher/Albert Lea Tribune

Two local choirs are teaming up to spread Christmas cheer with the community.

The Faith Tones and Harmony Junction a capella choirs will perform two combined concerts Sunday. The music will be a pretty even mix between recurring pieces and new ones for the groups, director Lora Virgil said.

Both groups will perform separately, then together for the final three songs of the concert.

“Our finale with Harmony Junction is I think going to, you know, blow the roof off, maybe,” Faith Tones member Susane Lee said.

Though past concerts included a theme, one was not selected for this year.

“We just kind of wanted it to be more of a variety show type thing — variety concert,” she said. 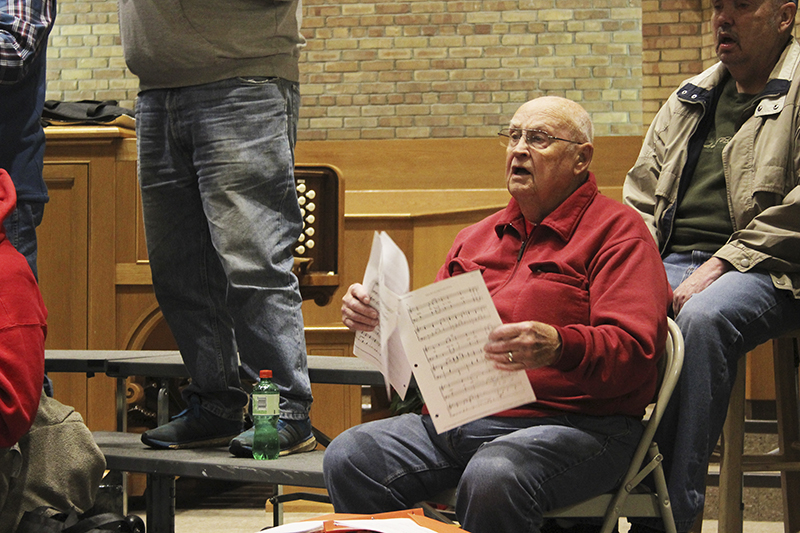 Harmony Junction and Faith Tones will sing separately, then combine for three pieces as a finale to the concert. Sarah Kocher/Albert Lea Tribune

Some of that variety will include combination song “A Christmas Blessing,” which the choirs have sung in previous years.

“We’ve pretty much decided to keep that every year because of the phenomenal words,” Virgil said.

The individual groups have practiced separately for this concert every week since September.

“We rehearse them until they’re really, really solid with them,” Virgil said; then, the choirs combine to practice together.

They’ve been running through “I Sing Because I’m Happy,” a song Virgil said made the choirs nervous at first but that they’ve grown to love.

Among other songs, Harmony Junction intends to take listeners back to the ’50s with their rendition of “Slow Rockin’ Christmas,” while the Faith Tones will perform “Singing with the Angels” — chosen in part for its catchy rhythm.

In addition to performances from the two choirs, there will also be soloists and duets to add variety. This year, Albert Lea Community Band will not perform, Rush said.

The choirs continue to offer a Christmas concert for two reasons: firstly, they love to sing, Virgil said.

Secondly, for Virgil, it’s important for Christmas music to carry on.

“I’d like to see some of the old Christmas carols, you know, keep singing them,” she said. “… I just love tradition and what it means at Christmas time, especially. ”

According to Rush, too, the Christmas concert sets itself apart.

“The Christmas concert is special in my mind and I think everybody else’s because we sing music that’s fairly familiar, and for that reason it’s easier learned and easier performed,” he said. “And it’s special.”

While the concert is free, the groups use it as an opportunity to raise money for a local charitable organization. Last year, the concerts raised over $2,700 for the Salvation Army.

This year, the free will offering collected will go toward the Humane Society of Freeborn County.

Virgil said she hopes the concert is a time for area citizens to take time to breathe and relax.

“I hope they walk away with joy,” she said.

The Harmony Junction and Faith Tones Christmas concerts are at 3 p.m. Sunday at the United Methodist Church and 7 p.m. Sunday at Grace Lutheran Church.

Who: Harmony Junction and Faith Tones

Where: the 3 p.m. concert is at United Methodist Church, while the 7 p.m. concert will be at Grace Lutheran Church.

How much: free to the public. A free will offering will benefit the Humane Society of Freeborn County.