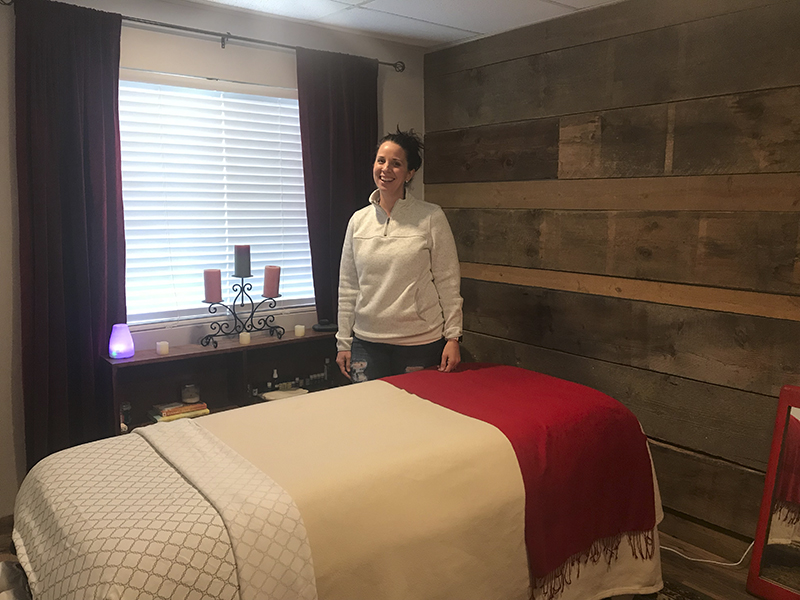 LAKE MILLS — More can be found at Kelly Gau Studio than a way to express oneself artistically. The studio is also home to massage therapist Darci Gau.

Gau began working out of the art studio in Albert Lea and relocated to Lake Mills when the business moved there in July. She works out of the studio a few days of week when she’s not traveling to visit hospice patients she sees through her work with Mayo Clinic Health System in Albert Lea and Austin.

“I’ve always done massage in some sort of medical setting,” Gau said. Prior to working with Mayo Clinic in Albert Lea and Austin, she worked at the University of Colorado in the integrative medicine department for seven years. She moved back to Iowa after tragedy struck her family.

Gau’s older sister was diagnosed with colon cancer and she had two young daughters she wanted Gau to take guardianship of. Gau moved back to Iowa to strengthen her relationship with her nieces and help take care of her sister, who spent four months in hospice before passing away in 2014. She later moved the girls and her son to Lake Mills to be closer to family.

“I meet people where they are physically,” Gau said. “If they are in a chair and that’s where they are comfortable, we’ll do the massage in the chair. I’ll make it work. I can do their hands, feet, neck and shoulders. If they’re laying in bed, then they say in bed.”

When not traveling to meet with clients, she works out of a room in the art studio doing massages that typically last between one to two hours. She uses a variety of methods, including Swedish massage, deep tissue massage and reiki massage.

“I really tailor a massage to the client,” Gau said.

When a client comes in for the first time, she’ll go over their medical history as well as any problems they may be experiencing or what goals they have for the massage. During that time she also makes observations, such as examining the client’s posture to see if their shoulders are back or forward, or if the client is slumped to one side. Her plan then changes according to the client’s energy — whether she senses they are fatigued or stressed, for example.

“I think it’s really about individualizing each experience,” Gau said. “Everybody is so different.”