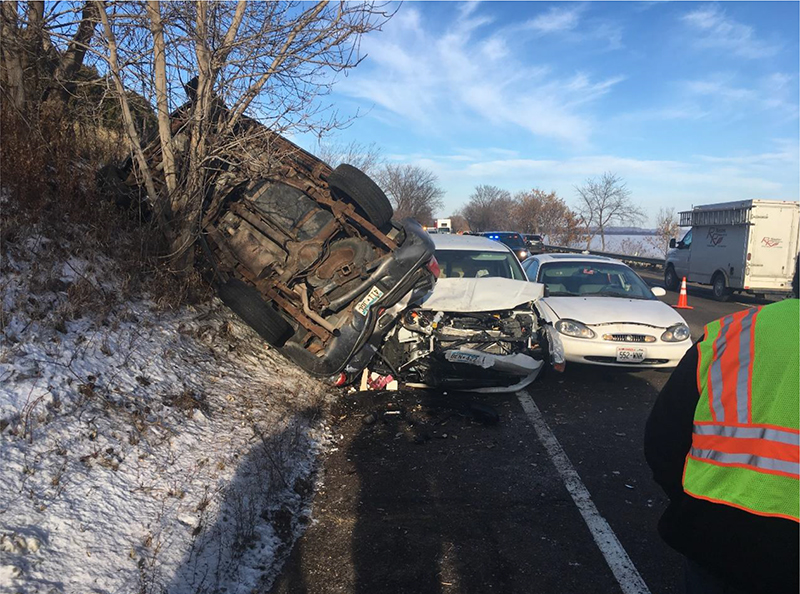 With three recent work zone crashes in southeastern Minnesota, the Minnesota Department of Transportation reminds drivers to slow down and pay attention.

MnDOT crews have been out in the warmer winter weather doing maintenance work on the roads and repairing damage caused by drivers. Drivers have crashed into work zones, damaging equipment, and created some close calls for workers. More maintenance work may occur on roads while warmer winter temperatures are present, so motorists should be alert for workers and more work zones than they might encounter when winter temperatures are colder.

“In each case, the work zones were signed and marked, but it appears drivers did not heed the warning signs to move over or slow down and prepare to stop,” said Tim Zierden, MnDOT District 6 west maintenance superintendent.

“We’re thankful our workers were not injured and the drivers and others were not killed.”

On Dec. 18, a crash occurred on U.S. Highway 61 north of Lake City at 9:05 a.m. MnDOT crews were in a work zone sealing cracks in the pavement when a rear-end crash took place.

One vehicle was stopped for a flagger controlling traffic. Another southbound vehicle was slowing for the stopped vehicle when a minivan behind the slowing vehicle crashed into it. The crash forced one of the vehicles up an embankment and it rolled down, coming close to hitting the flagger. The driver of the vehicle that was struck had non-life threatening injuries. The driver and the passenger in the minivan that caused the crash did not report injuries.

On Dec. 7, crews on Interstate 35 north of the Minnesota Highway 19 exit were repairing damaged cable median barrier. MnDOT snowplow trucks with crash cushion trailers and arrow boards on the back were directing traffic away from the left lane shortly after 1 p.m. when a van sideswiped the plow truck and rolled. The van’s driver was injured.

Also in December, crews were doing work on Minnesota Highway 58 near Hay Creek in Goodhue County when a northbound vehicle swerved around a vehicle stopped by a MnDOT flagger and lost control before striking a guard rail near the flagger. No significant injuries were reported.

MnDOT urges motorists to always be attentive, drive with caution, slow down in work zones and never enter a road blocked with barriers or cones. For real-time traffic and travel information in Minnesota, visit www.511mn.org or get the free smartphone app at Google Play or the App Store.