Panthers edge Rebels on the mat 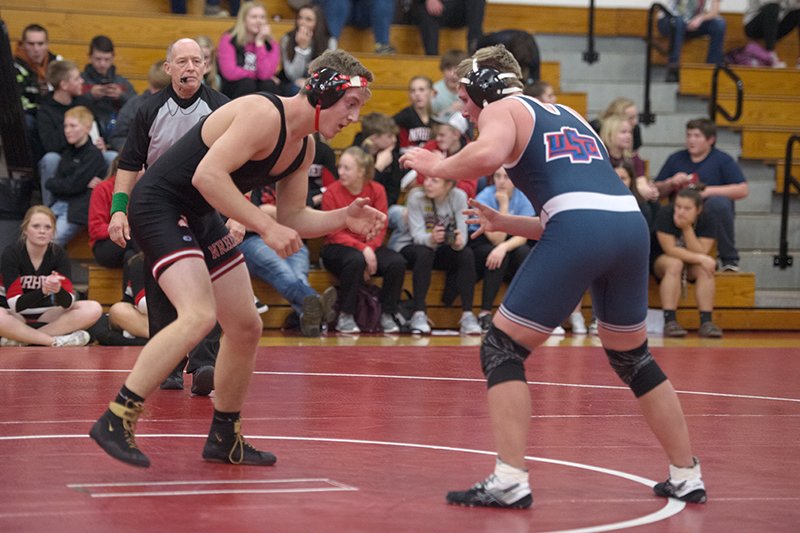 NEW RICHLAND — Two area teams battled it out on the mat Thursday night as NRHEG hosted United South Central in a battle of the Gopher Conference.

It was a dual of bonus points — filled with pinfalls, forfeits and double forfeits — with only two matches ending in a normal decision. The Panthers came out victorious over the Rebels in a meeting that came down to the final match, 36-28.

Neither team fielded a wrestler at 106 pounds, but NRHEG jumped out to a 6-0 lead when seventh-grader Annabelle Petsinger was awarded a forfeit victory. United South Central evened things back up in the next match when sophomore Bryce Sonnek notched a pinfall victory in 49 seconds.

The Panthers got another forfeit victory at 126 pounds from Nick Petsinger and took a 12-point lead after the 132-pound matchup that saw freshman Clay Stenzel get a pinfall victory in the second period. 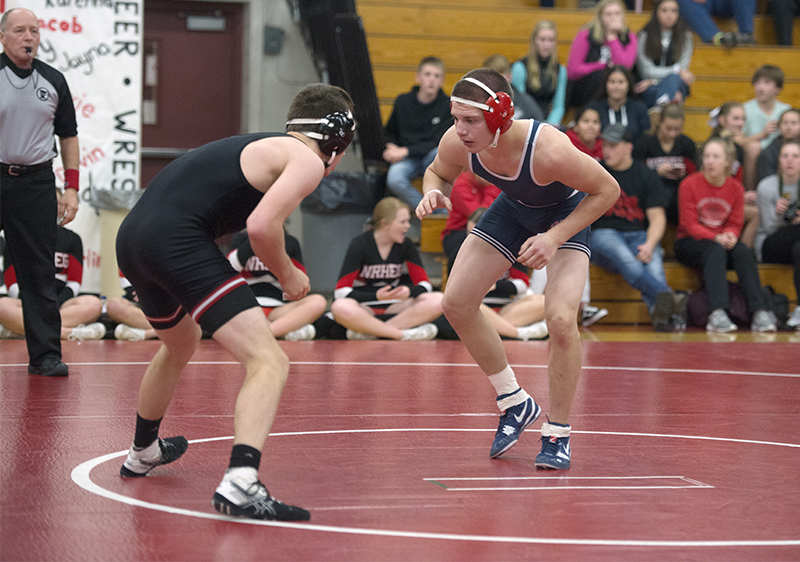 United South Central sophomore Micah Hamson looks for his shot against NRHEG sophomore Thor Routh. Hamson won the match in a 12-2 major decision, but the Rebels lost the dual to the Panthers 36-28. – Tyler Julson/Albert Lea Tribune

Now trailing 18-6, United South Central narrowed the gap with a pinfall victory from eighth-grader Conner Anderson over NRHEG seventh-grader George Roesler a minute into the first period. After senior Blake Legred won his match at 145 pounds by forfeit, the daul was tied at 18 each.

The Rebels would jump out to a lead when sophomore Micah Hamson won in a 12-2 major decision over sophomore Thor Routh. However, the Panthers would come back to take a one-point lead after a forfeit win for junior Agro Gushwa.

The match of the night came at 170 pounds between NRHEG freshman Ralph Roesler and United South Central senior Jacob Cory. Both wrestlers went back and forth during the first two periods before Roesler pulled away in the third, winning 9-4 and giving NRHEG a 27-23 lead with four weight classes remaining.

Panthers senior Tyler Jacobson won his match over United South Central sophomore Jacob Billings via a 7-1 decision, and a double forfeit at 195 pounds left the score at 30-23.

United South Central put the dual within reach after a pinfall victory from junior Masyn Elvebak over NRHEG sophomore Conner Okland, but NRHEG senior Quinten Arndt secured the victory in the final match with a first-period fall over sophomore Connor Ehlert.

The Rebels fall to 0-2, while the Panthers climb to 2-1 on the season. Both teams will be back on the mat Saturday in a tournament at Jackson County Central.