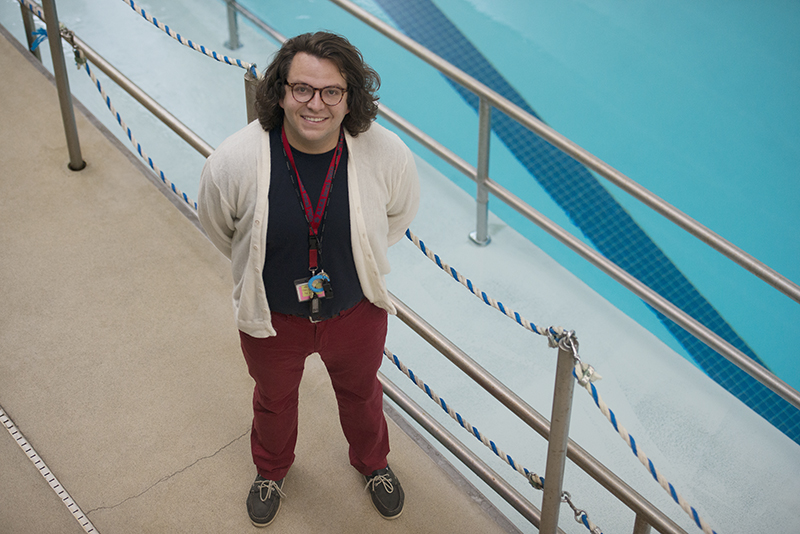 Sibley Elementary School teacher Clay Scott will take on the role of head coach of the boys’ swim and dive team this fall. It will be his first head coaching job, but he has worked as a volunteer coach on the cross country team for two years. - Tyler Julson/Albert Lea Tribune

Now in his third year with the Albert Lea school district, third-grade Sibley Elementary School  teacher Clay Scott will take on an additional role as the varsity boys’ swim and dive head coach.

Although this will be his first go at a head coaching position, he has a few years of coaching experience under his belt. Scott has been a volunteer coach for the Albert Lea cross country team for two years and for a year in Byron when he was student teaching.

Scott was hired on as the coach just a week before the team could officially begin practices. He said a few of the swimmers and some of the other coaches brought up his name and thought the job was something he might be interested in.

“This is my first year as a swimming coach, so I’m really excited to be learning about the sport,” Scott said. “Starting the year, this is kind of out of my comfort zone, but I’m really excited about it. I’ve noticed that a lot of the form, race strategies and things like that are very similar to track, so I’ve been able to jump in feet first and it has been great getting to know them.”

Scott said on top of coaching the athletes to be better swimmers, he wants the swimmers to develop as students and as people outside of the classroom. One of his goals coming into the season was to encourage the swimmers to try new things and take a step out of their own comfort zones. In addition to practices and meets, Scott is requiring each of the athletes attend mandatory study tables and also volunteer for 10 hours throughout the season.

The biggest obstacle Scott sees for the team this season will be its small size. He said they’ll be going up against teams that are sometimes up to 10 times bigger than them.

In comparison to the girls’ swim and dive team, the boys’ team is quite a bit smaller with only a little more than a handful, compared to 26 girls who swam in the fall. Scott said the lack of numbers will hurt the team as a group, but the goals for the individuals will remain unchanged.

“Ideally we would like to see the team a little bit bigger,” he said. “At the beginning of the season I wrote a letter to several students that I thought might be interested or that were on the team last year. Unfortunately, we do have a smaller number out this year. With that being said, it really allows us to focus on the individuals. It’s going to be really difficult for us to beat a team this year, quite frankly, but we’ve been working a lot on goal-setting and hopefully we can meet some of those individual goals.”

The main goal for each swimmer is to record a personal record at some point throughout the season. His goals as a coach are to connect with his team as athletes and as students and help them become well-rounded individuals.

Outside of teaching and coaching, Scott said he enjoys running, riding horses as a competitive barrel racer, raising and training horses, and playing any type of game. He described himself as a highly competitive person, and he is always striving to be at his best.

The boys’ swim and dive team will start its season Thursday with a meet at Rochester Century.

Interesting fact: he is growing out his hair to donate to Wigs for Kids. He has grown his hair out several times and donated it to the organization